Additionally, it says
b. The fourteen (14) Discs which begin the Match on the Autonomous Line are not considered to be
on either side, and may be utilized by either Alliance during the Autonomous Period. If attempting
to utilize these Discs, Teams should be cognizant of the possibility that opponent Robots may
attempt to do the same. , , , and will be taken into account when these
types of Robot interactions occur. Teams should also be prepared for additional scrutiny from
Head Referees to ensure that any mechanisms which interact with these Discs do not contact
the foam tiles on the other side of the Autonomous Line.

What I am confused about is the definition of “the foam tiles on the other side of the Autonomous Line.”

And I assume that if you are allowed to manipulate the disks on the auton line, then a tile being on both sides probably does not make it illegal for both alliances to touch.

So where is the line drawn?

(If you are on the top right, what line are you not able to go over) 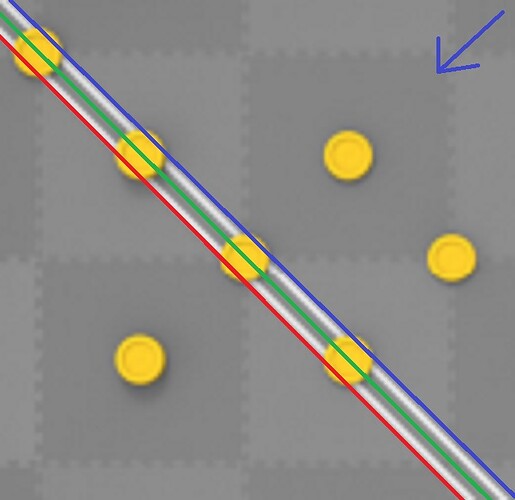 In years past, it has been the red line that you can’t cross and there is a mini neutral zone. If you really want clarification, I would recommend asking in the q and a.

It could be your side of the tile