According to Q&A 1019 you can use a mechanism to release match loads on to the field assuming no other rules are violated.

There are no rules prohibiting this; therefore, it is legal.

In the context of < SG8 > c. it seems that you could use use a mechanism to place match load rings contacting a robot.

c. Match Load Rings may not be placed such that they are contacting a Robot (from either Alliance)while still in contact with a Drive Team Member.

So who wants to ask the Q&A this question. As the rules are currently written it would be legal because there is nothing that defines transitive contact between a drive team member, but I have my doubts that it is intended to be legal.

My next question is a bit more open for debate. What does “introduced” mean in < SG8 > e.

Can this mean hovering over the field with a ring not touching the foam field tile before the match starts or between periods? Or does it mean the drive team member has let go of the ring(the ring would be contacting the field tile) and before they do its not placed or introduced?

f. It is expected that Drive Team Members may momentarily break the plane of the field perimeter while legally introducing Match Load Rings. This action should be kept as brief as possible, and Teams from both Alliances should be very mindful of when Match Load Rings are being entered into the field.
i. Any human contact with Robots from either Alliance during this interaction may be considered a violation of and / or at the Head Referee’s discretion.

And how does < SG8 > f. play into hovering you hand or mechanism during the pause between periods?

Have a fun discussion.

While it seems like this should be legal it might be possible that some refs wont allow such a device. I mean it doesnt seem like it should be against the rules but personally I would ask the head ref at a competition if he is okay with it first (otherwise you might run into some controversy mid match)
And for your second question I’m guessing that you are not allowed to have your hands inside the field perimeter but can have it just outside of it until driver starts. While I cant say for certain myself I’ve seen other teams do this so I’m guessing that’s the rule. As it says “introduced” I’m guessing that bringing the ring inside the field perimeter counts as “introducing” even if it has not yet been placed on the foam tiles but once again at a tournament I sould advice you consult a head ref.

I assume G3 would come into play and you would not be able to place a match load in a position with a tool that it would be illegal without a tool.

12ft poll that places rings on the opposing alliances tiles.

You can’t place the rings under the platform. 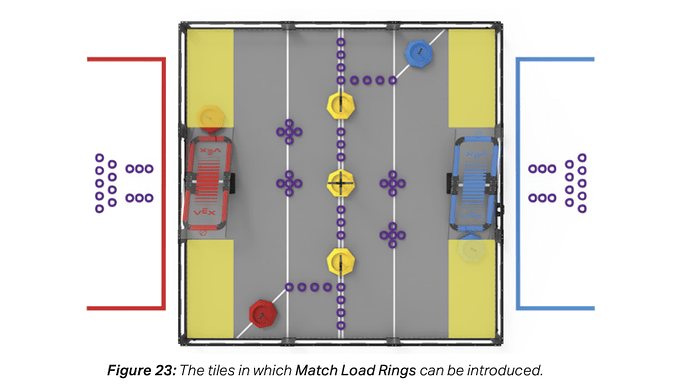 I mean, if you say so ig