Should I Keep Doing VEX?

. I literally dream about robotics now, and how I forgot to do this

The fact that robotics is in your dreams means that you enjoy VEX as a whole but you don’t enjoy the people involved. If everyone is focused on AP tests, college applications, and SAT exams thats not their fault. But for those who barely go after school just for the resume thats where it is borderline unacceptable. People should do what they love, not just because of mere resume credit. If you dont like how robotics is, and nobody is stepping up to lead, who isn’t telling you to not be a leader? Step up and lead the robotics team, who cares if you make mistakes because we all make mistakes during our high school and even during our lifetime. As a freshman, I led the entire robotics organization of 7 teams filled with sophomores, juniors, and seniors. Step up, be a man or woman with the confidence to succeed. Although this sound cliche, dont let others bring you down.

the only freshman and girl on my team, so getting a “leadership position” is a lot more difficult

Please stay. Build something simple. Learn to drive your robot in a way you can score the most points, even if it is a simple clawbot. I have seen super-sophisticated engineering marvels fail and pushbots win. If you stay positive, focused and passionate then good people will come. Delegate and explain what you need done, don’t assume everyone knows anything about robots. You never know, you might even get the ones that are there just for the credits engaged and interested. And then you have a team and then you are a leader.

Most importantly, you have “the right stuff” that comes harder to others - passion!

As for the quote above, please read this article from robohub.org:

At this point, could you break off and form your own team? If they won’t let you lead?

I’m (for some reason) the only freshman and girl on my team, so getting a “leadership position” is a lot more difficult.

No males or females, just Engineers who wish to change the world.

That is one of the best quotes I have every heard of in my life. don’t quit. Like what @Connor said. You are always going to have bad years and good years. You should just keep on trucking and never give up. Things will get better. It is called perseverance

Yeah bro, quitting is not the answer. I’ve never had this experience as a 2nd year MS VRC student, but I can imagine it. Your teammates might not work with you or want this, but that doesn’t mean you should give up. Make friends with teams at the competitions you go to, get connections, and just keep trying. Like @ButterNubs said, it’s the perseverance that counts. If you quit, in a few years you will be looking at the kids that you used to be and regret quitting, even if it’s hard now. Push through this year and crush the next, you got it man!

Yeah, I was sort of in the same boat last year. My team was never there and did nothing. We had funding but I made LOTS of rookie mistakes just ask @4810N and @JustARedneckEngineer. I sucked. We placed low a lot of times and I lost some friends. A lot of robotics kid dream about robotics since it is so fun to do. If you keep on trucking it will get better. This year my team is still never there but I just know that it will get better. Talk to your parents and get their support. Everybody in you family and your friends support you and will help you no matter what. Hang in there. *Insert that cat hanging on something

Okay, I dont think that’s something you should post here.

Admins finna get you 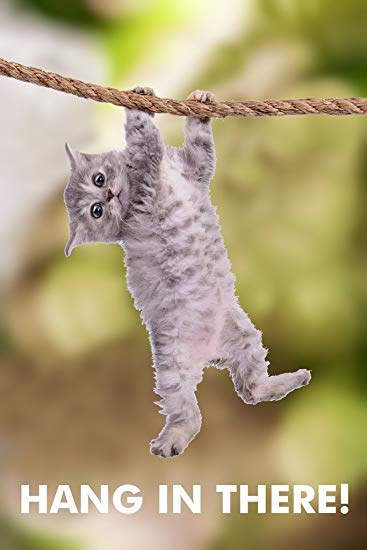 THERE WE GO much better and family friendly

But honestly, I understand. My freshman year was a team of 8 people that both didn’t do anything and wanted me to change designs every week. The year after that (when I did have dedicated teammates), my team went to state. If you can get out of the team you’re on and take more leadership, do it. If not, just bear through it. The more years you have in VEX, the more responsibility you get. It’s totally worth it when you do something awesome.

Thank you so much for all of your responses. I have decided to keep doing VEX, and tough it out, like you said. It’s really something I enjoy, and I’ve decided that it’s worth it. I’ll try all of the things you guys have suggested, and hope for the best. It’s nice to know that I have such an awesome forum to back me. Thank you all again!

Yeah, just keep on pushing and you will see the light at the end of the tunnel. My quote- “The past is history, the future is opportunity.”

I hate to be that one more guy, but I feel like I have a little to say here.
Those one-man team threads are actually very relevant to this topic. I’d definitely check those out. I’ve posted there’s, so I’ll try not to repeat myself.

I’ll stop rambling (pm me if you want more information, I’m just trying to save the time of others). I just want to leave you all with one thing:

We do not do these things (Vex, robotics, anything) because they are easy, but rather because they are hard. We don’t give up because something is difficult. This is a jungle of obstacles to overcome, and (while robotics is enjoyable) it’s not all fun and games.
Others may have their paths cleared before them. The powerhouses in your region, for example, have most likely been long-established organizations who started similarly to how you or I did. They have paved paths and lightly wooded areas. We have a jungle. But don’t flee becasue it’s difficult.
No, embrace it. Allow yourself to Build what you stand for.
Welcome… to your jungle.

If you are reading this. My only thing to say is dont stop. From what I saw in the beginning you loved it. Imagine all the memories you made and so on. Its normal as most said on this thread and if you want to fix things you should consider talking to your couch and removing them from the team and get better teammates and also find some sponsors to help with the school funding. You can also get the school to maybe give you more money. For my team we are funding by sponsors and people helping out. You can do it