When the game came out, something was clear: Skills was going to be easy. Everyone expected a max driver skills by worlds.

Nobody expected a max driver skills less than 2 weeks after the reveal, but when there are only 15 objects to score, and they are all scored in the same way, things happen. Turning point, another low scoring swing game, avoided this issue by having caps and flags, but Change Up isn’t like that. I’d like to congratulate 46535K on hitting that 63, and ask for an update to the rules, so the skills challenge can remain competitive throughout the year. The way I see it, there are only a few options:

Oh, and of course there is the completely unrealistic option of _toss_ing change up in the bin and replacing it with a new game.

Unless some changes are made, the skills challenge will be completely broken all year.

As one discord user said: “Skills isnt a joke. Its the entire comedy show. Go home.”

Yes, and it is even worse for vexu with 2 robots. This definitely needs to be fixed.

In all honesty, I would have expected a robot built in a week under normal circumstances to perfect driver. I’d like to see something along the lines of what VEX IQ does in elimination matches and record how many seconds are left after each match ends for both Programming and Driver, and then have the tiebreakers after highest score in Skills in each category be highest Programming Skills time remaining, then highest Driver Skills time remaining.

lol… great job by the team.

well… think programming skills will make the difference for this season then.
not easy for programming when the balls will roll around.

Exactly. Skills is only broken when multiple teams are maxing both early in the season. Maxing driver wins you…nothing.
Be good to see teams maxing both!

Does the team have a video of the run?

It’s right here at the end of the video 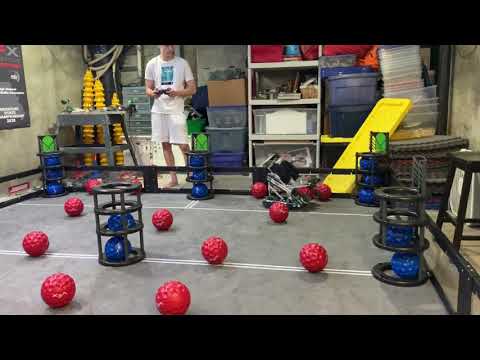 Actually, it seems more beneficial to start in the “other” home zone (the one with fewer balls and emptier goals, as you can start with extra balls on the side with the dearth.

Time to watch the bad teams get negative scores in skills. Still like you thinking.

Counterargument: Skills is not broken.

This season, the GDC really put an emphasis on programming, giving a 1 WP (half a win) for completing a task in auton, releasing VexAI Competition, and making programming skills the most important factor in skills.

Of course, the GDC knew this would happen, and implemented the ranking based on date; however, I expect that fewer than 20 teams will max out programming and driver by the end of the season. It is just that difficult to score 15 balls in 9 goals in only 60 seconds.

TL;DR: Skills is set up this season to encourage better programming, it’s just easy to max out driver as a side effect.

even if that is the case, as a driver I’m mildly disappointed at the lack of a challenge for driver skills. Imo the ceiling should be really high for both driver and prog skills, so that both are always getting pushed higher. Tower Takeover was a perfect example of a skills friendly game, you could never max skills, but you could still get insanely op driver and prog routes like 7k.

This is the only feasible change I can see being made but then you have to have a judge record when the run is finished and a lot of other subjective variables. Unless they implement some sort of buzzer that needs to be pressed by the driver when the run is officially done.

Either way, this might be overkill. Remember the team that maxed out skills is a high level veteran team. Vex doesn’t want to appeal to the small minority of elite competitors, they want the lower level teams to experience the same sort of success to encourage learning.

I think it would be cool if they changed it so you had to make some pattern with both red and blue balls to encourage the highest level teams to be good at scoring and controlling de-scored balls. Just a thought. I would much rather a season where skills doesn’t get maxed out until worlds, makes it much more fun to watch teams bring out their best runs at worlds (365X in SS and ITZ, 5225A in ITZ). Currently as skills is i think that a majority of teams will be able to get max driver by their state championship and that kind of defeats the point.

The easiest solution would just be to cut driver skills down to 30 seconds. keep prog a minute. Would make it harder for sure.

TL;DR: Skills is set up this season to encourage better programming, it’s just easy to max out driver as a side effect.

Simply put though, you can encourage programming without making the over all challenge to easy. This is far to easy if teams are scoring max driver skills with nothing but a 4-bar with a intake system on it. It’s just far to early for max scores

The easiest solution would just be to cut driver skills down to 30 seconds. keep prog a minute. Would make it harder for sure.

Personally I like your idea of deducting points depending on how many blue balls are scored, I can see how this can prove an issue though as the skill gap between good teams and smaller teams would be huge.

wasn’t the skill gap between good teams and bad teams huge last year as well though? I don’t see a skill gap being an issue.

skill gap doesn’t really matter at all in skills tbh. The low level teams will never be able to compete with the high tier teams in skills, no matter how easy the game is.