Is anybody else incredibly unhappy at the prospect of another possible shooting game?? Predictions please.

Maybe it isnt 100% shooting… There could be something like nets that are kinda like slapping. The nets are attached to the field and have different points to integrate with them. Maybe you have to pick up stuff, pit it in a net or other container on the “slapper” and then use the “slapper” to score the object. 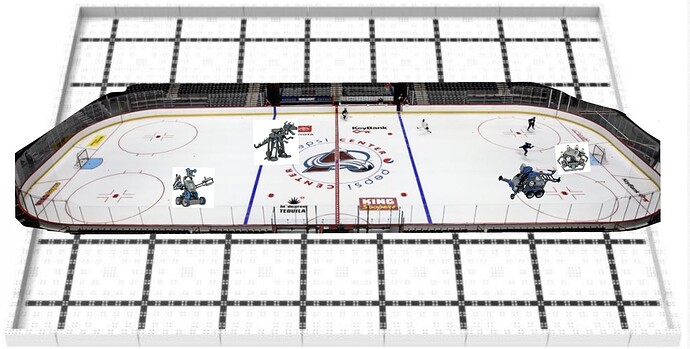 Also if it were slapping from the robot directly it would mean there would be special pieces that could slap. There is no Vex IQ part that can emulate slapping, and if the game had no slapping then its a horrible name. So it would probably involve a slapping motion from the field.

Or maybe like ringmaster+crossover, where the elements are in a crossover like structure for the start of the game, and the ringmaster paddles like on the tray from ringmaster could push out the elements to be scored. This would also be good for the hero/beginner bots, because there is a point per pushed out item, so it would be like a low goal scorer in pitching in, with better bots that can actually use the elements to their full potential.

I’m envisioning some horrendous combination of Ringmaster and Crossover. Small rings/discs having to be pushed under a very low bar, and other goals higher up with similar small slots, probably with some keepout zone that will require shooting into, with misses falling into the low goal area.

Going to go out on a really long limb and predict at least one hanging mech.

There doesnt appear to be any elements under tarp or hints to previous games in this one, unlike the spin up one. So probably nothing there.

One thing I find interesting about the direction of Vex is how VEX IQ every year strays from a beginner-friendly educational program to a competition hungry battle (still educational but in a different way). We’ve seen the games get harder and harder, in order to keep up with the students because they’re improving at lightning pace.

It started with the pilot Rings N Things.
From 2013 to 2022 we had Add it Up through Pitching In. But Pitching In will rest as the final “VEX IQ Challenge”,
As Slapshot begins the new era of the “VEX IQ Competition”

I kinda think that you will have to sort of slap balls or disks into a net, and maybe different areas in the net would be worth different points.

Yeah, I think it will be disks though since slap shot is a hockey shot

VEX IQ every year strays from a beginner-friendly

I do a beginner camp every year with the new game. The kids clear the corral and push the balls in the low zone. They loved it. Pitching in works really well on a beginner level.

We’ve seen the games get harder and harder

I think Ringmaster was the last game where we didn’t see a perfect score. The game this year is really easy in comparison. My students got a perfect score in practice a couple of times. That has never happened for me before. (Well, except for LRT Rise Above, but everyone got perfects in the LRT version.)

Ooh yeah like hockey. Maybe it will be like next level, where there is a limit to airborn “pucks” and you press a button to push out a “puck” and you can only have 1 at a time in the air, and you bring it around an obstacle to get it to the goal.

These are all wonderful points, I’m happy you’ve found a way to make every game friendly for the little ones.
I guess the way I would describe it, Highrise through Ringmaster had beautifully complex robots. They were squared up, watching them score always made me go “woahhh!”. (Add it up was somewhat experimental for all the rookie teams)
Since Next Level, centers of gears have been dug out, axles have been bent, 2x beams are intentionally bent to reach their spot [I know this is more or less just an engineering problem], cantilevered wheels… IQ parts have been pushed to their limits since then.

It used to be a wonderful design challenge, figuring out how to get rings on posts, scoring hex balls in the high goals. But now the games are simpler (arguably minus squared away) and the real challenge is pushing the motors and structure parts to their limits in order to do the simple challenge faster, more efficiently than the rest.

You’re definitely right, ringmaster was really the last “no max” game, making it tougher, it’s just that the types of challenges flipped on their heads in 2018. “Do this” became “do it better than them”.

TLDR: The games have become easier.
Challenge= Engineer a strong robot to complete the task.
Competition= Slight meta fallout for an easier game, just do it better

I just dont want another shooting game in general😐

We’ve seen the games get harder and harder

Pitching in was easier than both squared away and rise above in terms of getting a perfect score. One thing I didn’t like about rise above was that the gap between the beginner teams scores and the more advanced teams scores was pretty high. As a triple stack in a completed row is 36 points (or something like that), while just having a completed row gave only 6 points. I really liked squared away, mainly for the reason that there were two scoring elements you had to think about when designing your robot and very few people got a perfect score in teamwork, while none got a perfect score in skills. I really hope that slapshot is something like squared away.

Agreed, or something like ring master. I dont want a game where you cant fully clear. Where you have to expirement to get the highest score possible and can fully clear. It would be more fun and beeter experience.

Ringmaster appeared to me to have the most non-student centered bots in the history of VIQC. Some of the bots that dominate the Youtube searches are well beyond elementary/middle school skill sets, especially considering how long the Vex product had been on the market at that point.

Still, i would love something that taxes my mechanical knowledge that much. Something even slightly simpler, where multiple designs dominate. It would be so much more fun than the basic easy stuff in the last two years games.