So I had an idea for a Slapshot robot. And I wanted to know if it sounded doable/good. I’m not a builder so don’t kill me if anything sounds insane.

It’s a single vertical flywheel 1 inch from the ground where the discs shoot out from. It has a chain intake that slides the dics along the ground with the flapper-thingy’s. A 2 motor spitfire-esque drivetrain. And something to spin the wheel that let’s the disc down, but I don’t know how to build that. 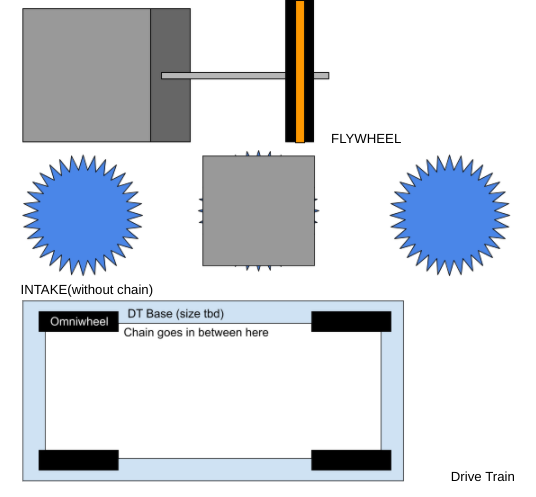 (did that work? I’ve never uploaded an image before…)

it could work but where would the disks go when shot out. they would curve and you need to be accurate to get all the points. my idea was to just push them out using a very specific gear ratio to keep it consistent and get into the 4 or 3 point zone.

1: The disks would go into the 4 point zone once I got the write velo for the flywheel
2: There’s gonna be a funnel
Also cool gear ratio thing
And thanks B)

If you can get me a bit better design concept, I can PM you with a few ideas you can build off of or just completely ignore. Like a bit better intake. I can work with whatever you need help with.

my teams gonna do a slip gear VEX IQ Pitching In （百发百中）——弹射结构（间歇齿轮） - YouTube
Or possibly a puncher we designed to shoot axels. We’re also gonna have three conveyer belts which lead to one shooting mag and two funnel mags. The funnel mags connect to the shooting mags so we should end up being able to shoot all the discs in skills.

That sounds good! Keep going and I’m sure you will make it to worlds!

imagine not being regular smh