So I am having trouble with my hoodbot, it isn’t shooting the ball out like it was. I think that the problem is that we had a 4 inch wheel tank drive, then we switched to a 3.25 wheel x-drive. this means that our top roller was moved down, but less than half an inch. Before, it was scoring consistently in all the goals, but now it isn’t shooting them up consistently. here is a video and some picture. (upload://23nukbwlgE8WS6N6SDpejYcwiGe.jpeg) 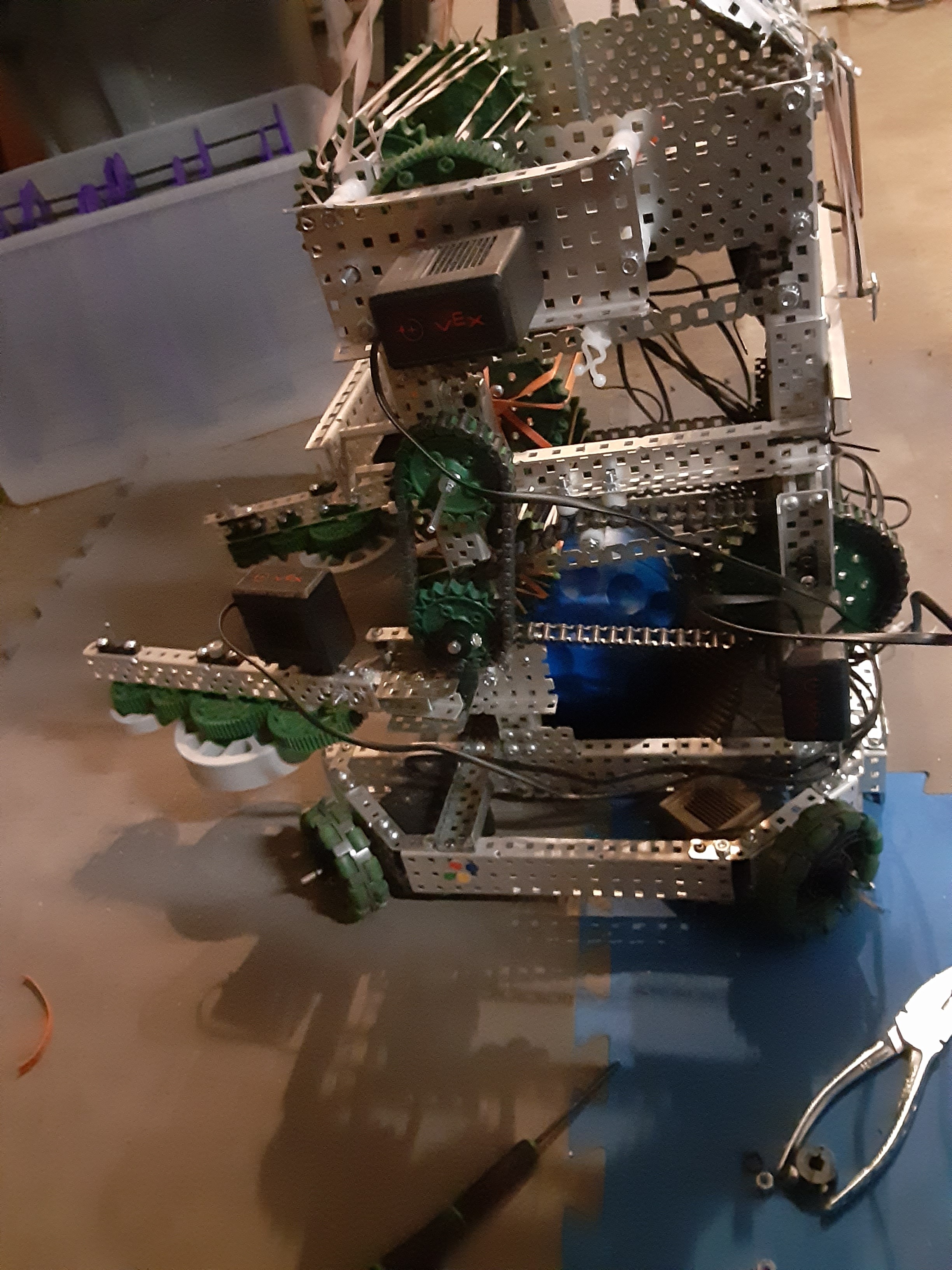 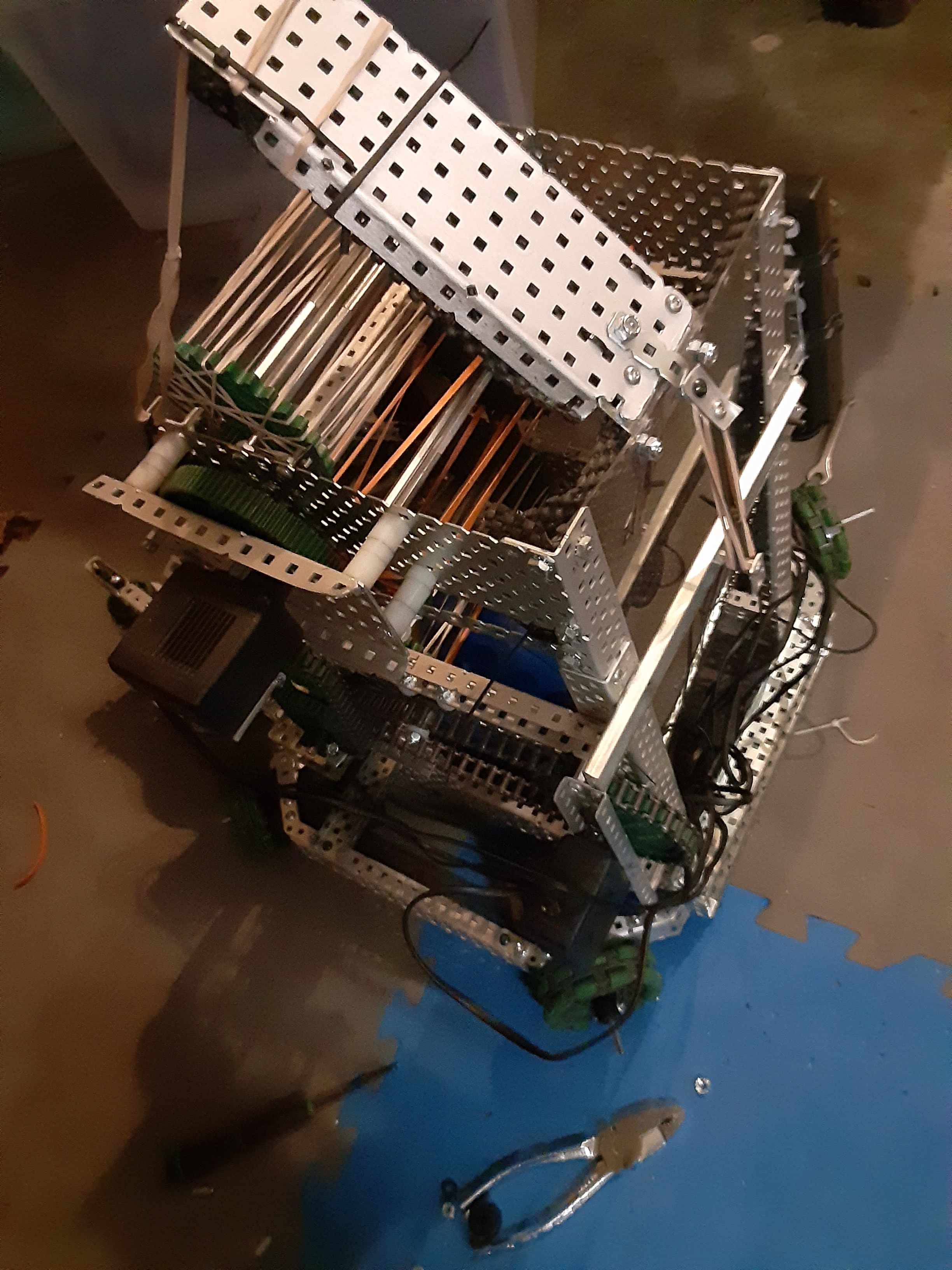 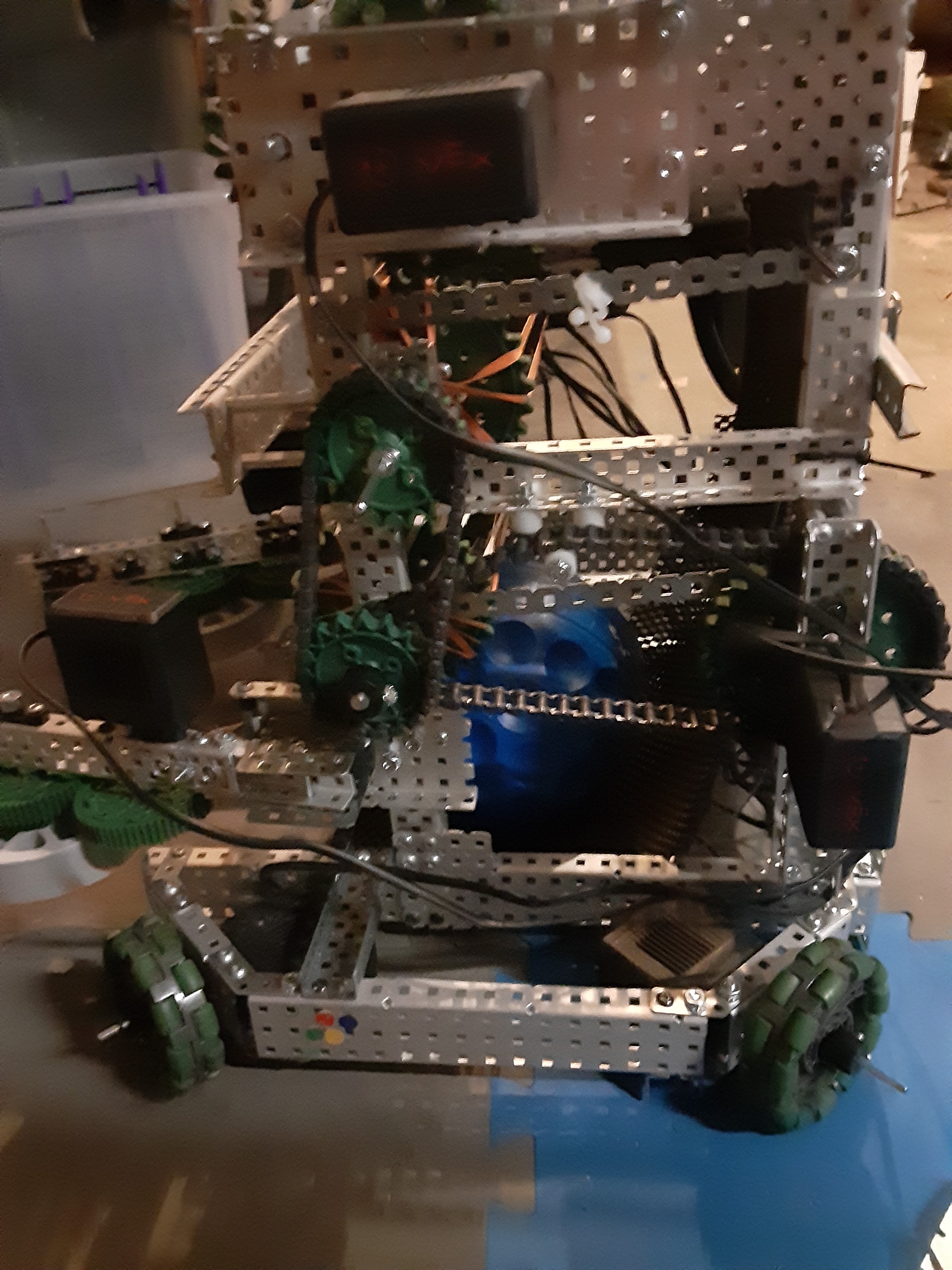 The middle rollers run at 600 rpm, the top one on 1400 rpm. All of them are on 30 tooth sprockets.
I believe it should work-the rollers are at a high speed, there is good compression on the hood. Like I said, it was working fine before, but I don’t think that moving it down half an inch should make such a big deal.
The goal is the middle goal. Since I took it home, I only grabbed the middle goal, and I just moved the front bars up. that is not stopping the ball, I am sure of that. The intakes and the hood also pop out.
Edit: I was getting a lot of requests over my school email to view the video. I have removed it temporarily until I can find a better way to post it.

your bot looks pretty floppy if I’m being honest. lots of cantilevering, and using really weak parts like plates and bars for structural support. this is probably the biggest cause of any inconsistencies you are having.

your flat hood is probably taking a lot of energy out of your balls as well, I would experiment with a curved one instead.

there’s no easy fix for bad/inconsistent shots, you have to fiddle with roller and hood geometry until you get it right.

Not really, I used the plates instead of 5-wide because I didn’t have any 5 wides. It is plenty sturdy. It was very consistent before I moved the wheel size down. The bars are just left over from when we had a slow tread lift (early season) and the balls were falling out the side. The plates are just there to keep the top connected. The robot is very sturdy, I promise. I have experimented with a curved hood of plate, just as an experiment. I think that it is hard to do a good curved hood like that without back rollers as well. I think that the easiest solution for this is to move the top roller up a hole.

I would agree using a curved hood is hard but not as hard to to make as it may seem. You don’t have to make it perfect in order to work well. Our hood is very strange and works extremely well. And we have no back rollers

I can tell by looking at it that your bot is not going to be as sturdy as you want it. you’re using angles for support towers, and plates for structural components. it might not be super floppy, but using c channels is probably a change you should consider.

I think that the easiest solution for this is to move the top roller up a hole.

this would probably help, though I do recommend a curved hood as well. flat ones just take a ton of the momentum out of the ball compared to a curved one from what I’ve seen.

I have used all of our lexan right now- 24 by 8 for our current ramp, and I… kind of butchered the rest of it. I don’t think a curved plate hood will work… Unless I do maybe something like Xenon’s Ci2d hood where he uses the standoffs, to keep the plate from bending back. I think that the problem with that is that my top roller would still be too low, to keep good compression on the hood, the top of the hood would be to low, the ball might still do what it is doing now.

What is the problem with that? It is hard to see with the pictures, but I do have standoff triangular supports on the angles.

What is the problem with that? It is hard to see with the pictures, but I do have standoff triangular supports on the angles.

angles are able to twist a lot more easily than c channels, which is the main reason c channels are much more rigid.

One more note, we just finished the x drive, we are going to add some outer channels on the wheels and over the sprockets to fix that.

Hey by the way you can also do a curved hood kinda like how 355e has it. Will be better than just a fully straight hood

I second @Xenon27, those structural pieces won’t work the way you think they will.

I will consider changing the plates to 5 wides once I can get some more, but for now they work. The robot has survived a 2 ft drop onto a hard floor, and a table collapse. It’s fine for now.

If you think that doing a full on curved hood is too hard or you are unable to for some reason, please try to smooth out the transition to the hood. Something as simple as a small piece of plexiglass (1 in x 2in would probably be plenty) or a small amount of anti slip would help to keep some of the energy while still being incredibly simple.

to save on polycarb you should consider lowering the width of your ramp. 8" is quite a lot considering that the game objects can only ever contact one point on the ramp at a time. Our team is currently using a 2.5" wide ramp and it works perfectly fine.

That’s a good Idea, but we have a tournament pretty soon, as well as the fact that I have limited parts right now, so while we might do those eventually, what we have now works fine. However, our robot does have a ramp that extends past the bottom roller, so we are using all 2’ of the plastic currently. Taking into consideration what @RandomKidOnAVexTeam said, would it help to make the ramp and hood all one piece, so we could do a curved hood like that?

Yes. The hood and ramp should be one piece to help have as smooth a roll as possible. Any lumps and bumps from the transition between the two makes the ball lose energy.

Also, just in general, I suggest slowmo videoing it to see what happens. This helped me greatly back in TP with my catapult to figure out why it wasn’t working. Even just an iPhone video of it works if you watch it frame by frame.

Never mind that, I solved it. I decided to revisit my curved hood prototype, and this time, it worked. It has around 80 percent accuracy, so It can be improved, but here is a video. 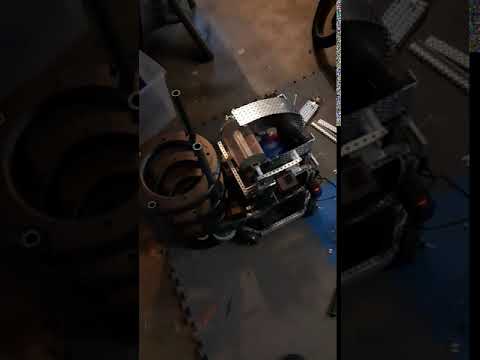 Oh yes, definitely. That is just a test. It doesn’t even flip out yet.

How would you recommend doing this, by the way?

Not the same person you’re asking, but how my team did it was we put standoffs running from the base of the flip-out part of the hood to the end of the hood. These were attached to 2-wide c-channels on either end.
Edit: Added images of my team’s bracing. 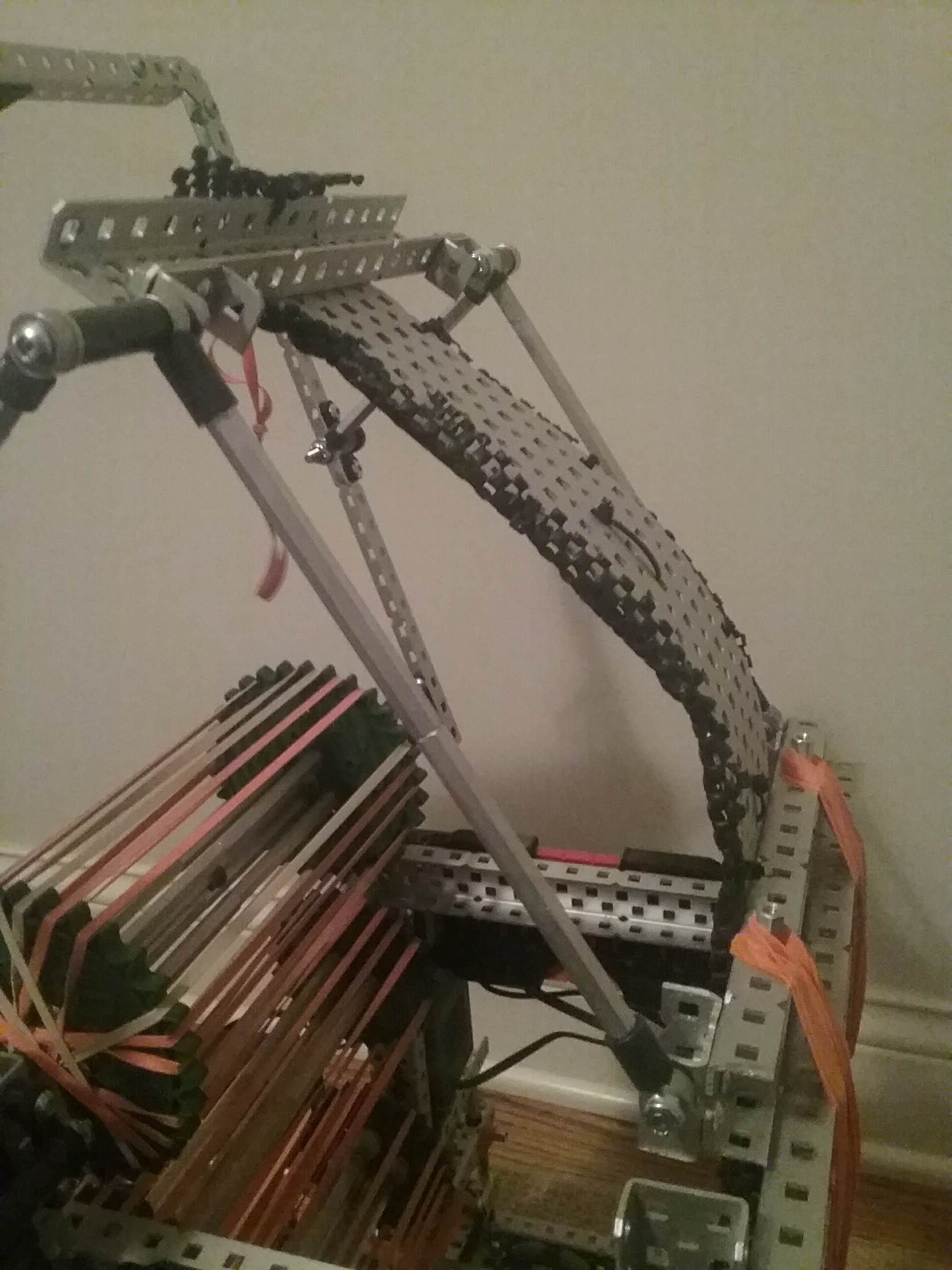 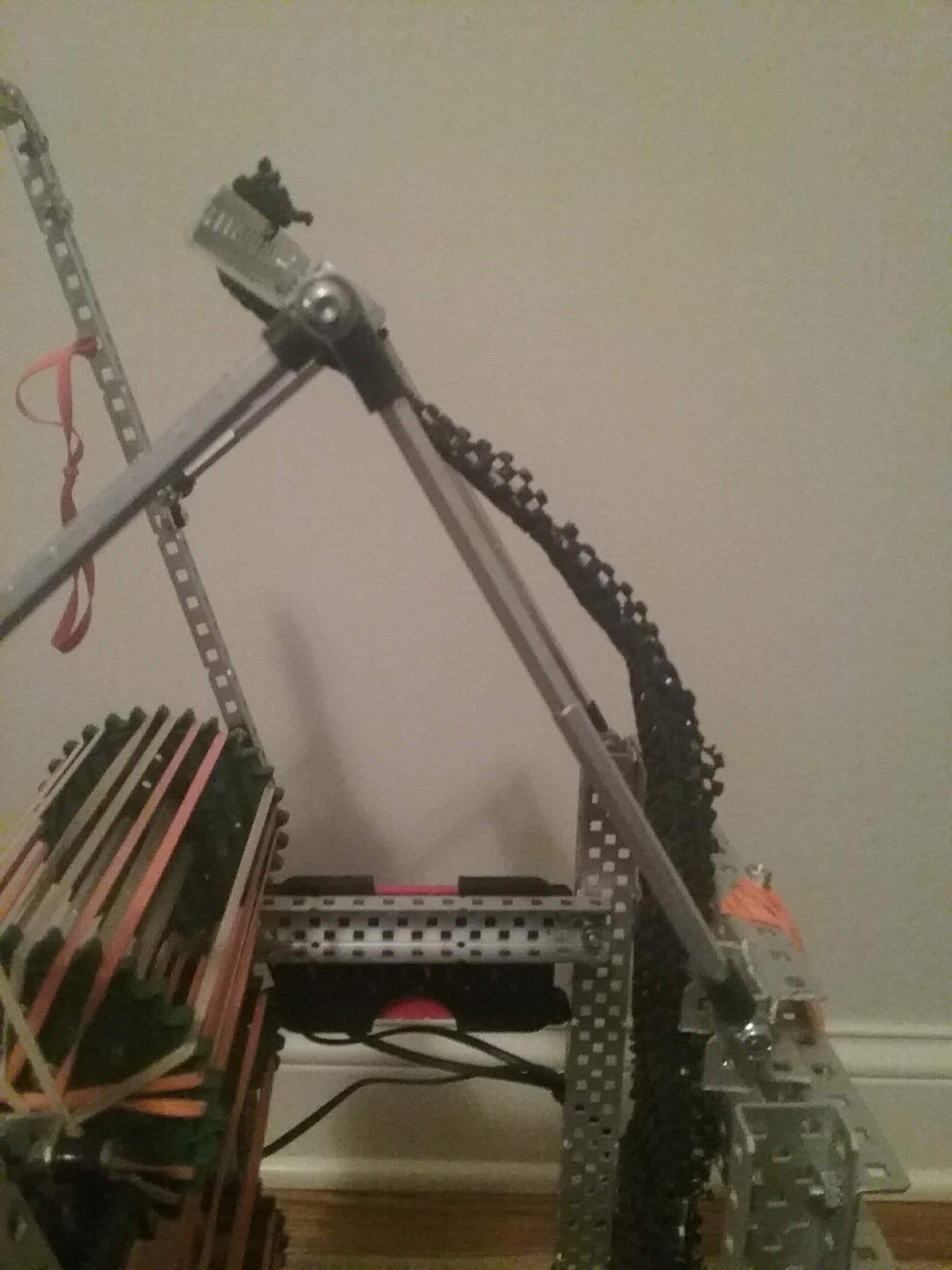