would 2 blue motors (600rpm) on 7:1 to get 4200rpm be overkill?
I’m CAD’ing a J shaped launcher that goes 3000rpm 5:1, I just have no clue if that’s enough or if its better that the disk shoots straighter (faster) rather than arched slower. Speaking from distance and how the disk would crash in the chain net

How did it flew/acted on yours?

I believe 4200 rpm would be too fast and will bounce off the net, if 3000rpm is meta I think building a mechanism to adjust the angle would be the best way of doing it.

but if 4200 is better you wouldn’t need to adjust as it will fly in a straight line.

If you look at other topics on the forums, there have been discussions about flywheels. Use the search bar; it’ll likely answer your question(s). Others have posted about similar setups.

In addition to using the forum searchbar as @ezl recommended, I would also try a youtube search along the lines of “vex spin up flywheel.” Many teams have posted videos of them testing flywheel prototypes that could give you some insight on how different rpms perform.

Assuming that you intend to use this for VRC as the catergory says, the Andymark compliant wheels wouldn’t be competition legal.

< R6 > Robots are built from the VEX V5 system. Robots may be built ONLY using official VEX V5 com- ponents, unless otherwise specifically noted within these rules. Teams are responsible for providing documentation proving a part’s legality in the event of a question. Examples of documentation include receipts, part numbers, official VEX websites, or other printed evidence.

These would be the VRC legal alternative.

Does this applies for vexU as well, I forgot to mention it on the post

Others have posted about similar setups.

Thank for the tip, kinda new to this

Vex U does offer a wider range of flexability, but you are still mainly restricted to VEX parts.

< VUR2 > Teams may use any official VEX Robotics products, other than the exceptions listed in the tables below, to construct their Robot. This includes those from the VEXpro, VEX V5, VEX EXP, VEX IQ, and VEX GO product lines. To determine if a product is “official” or not, refer to www.vexrobotics.com.

Take a look at Appendix C in the Game Manual for farther detail.

Testing out options is part of the engineering design process. It shouldn’t take much effort to build one, evaluate it, and then modify the gearing to test the alternative.

When talking to judges, they will be more impressed if your team evaluates multiple solutions rather than saying, “Well, we looked at the forums and everyone was going with X so we did too”

Thank you!
I’m getting those wheels, the adapter is out of stock but I can design one, I also found the answers for my previous question.

Actually found this on one of the discussion of the flywheel https://tryitands.ee/
ty for the tip

You don’t necessarily need to run a 4200 rpm flywheel at 4200 rpm. My prototype flywheel is a 4200 straight shooter and can shoot in to the goal at around %70 power (2940rpm) from the match load station. You might be able to get a 3000 rpm J shooter to work but the only to know with your particular flywheel is to test it. I would recommend using a 7:1 ratio and testing to see what speed you need.

what wheels are you using? 30A, 45A, 60A
I’m probably buying the 60A as the disk will get pushed against the walls

Depending on your budget, you should probably buy all three and test. What works for one person may not work the same for you.

I use 60a as the flywheel has more interia. Another reason is that it doesn’t expand that much which is good for a compact design.

Another reason is that it doesn’t expand that much which is good for a compact design.

I use 60a as the flywheel has more interia

Reading this made me wonder if this is true. First we are talking about the moment of inertia, which is for anyone unaware is effectively what “mass” is for a object that is not rotating. The rotational inertia is const * Mass * Radius^2. The const is defined by the shape of the object and not really important as the two flex wheel have the same shape.

I measured the mass of the two flex wheels:

We are going to but talking about 4" diameter flex wheels here so we convert inches to SI units and the radius is 5.08cm:

The difference is 361.2896 gcm^2 BUT the 30A wheel expands when it is spinning increasing its radius. By how much? Based off my observations it is at least 1/8". What happens if we take that into account?

A few caveats for this. The inertia actually doesn’t matter as you can increase it and decrease the moment of inertia within the fly wheel system by simply adding weights. Use a HS vs an normal shaft to add had plenty of mass. Another caveat are the units that I am using is grams centimeter squared. These are really small units to use, and I used them to better show the difference between the two flex wheels. The fact that my I scaled up the numbers by changing units from kg m^2 to g cm^2 highlights the very very small difference that the inertia of the wheels have compared to each other. 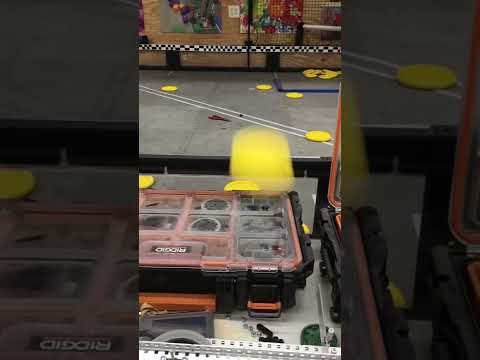 ~15 foot launch on a flat trajectory

Not a flex wheel.

15’ launches at almost a flat angle

You can simply stack wheels on top of one another to add mass/inertia. Also, as the ‘primary’ wheel contacts the disc, the others will act as stabilizers due to gyroscopic properties. There are significant shock loads during disc acceleration.

Also, as the ‘primary’ wheel contacts the disc, the others will act as stabilizers due to gyroscopic properties. There are significant shock loads during disc acceleration.

For the first part I am unsure why this is really important. I haven’t played with making flywheel enough(vacation + not much build time), but the wheel would be stabilized parallel to the rotational velocity vector. I don’t see how the disc will cause the flywheel to need to be stabilized in the direction.

For the second part simply increasing the inertia of the wheel will decrease the “shock loads” on the flywheel, as per the nature of a flywheel.

Generally speaking, the more rotating mass you have, the more stable it will be. The more constant the shaft rpm, the less shock the motor(s) experience(s). And for those looking for an easy way to add extra mass… stacking wheels is a good option.

stacking wheels is a good option

I don’t think using more wheels is really a very good option. It will work it is easy, but its not a very efficient way to add mass/inertia to the flywheel. Adding a large gear with weights would seem like a better option for me.

I like the idea of screws/nuts on the circumference of a gear… should have a nice moment of inertia. I question the safety of it. If you get a finger in there, those bolts are gonna remove some skin in a rapid fashion. Using a solid rubber wheel for added mass presents a smoother outer surface in case contact is made with your hand, finger, or other item.