Friend sent me this… 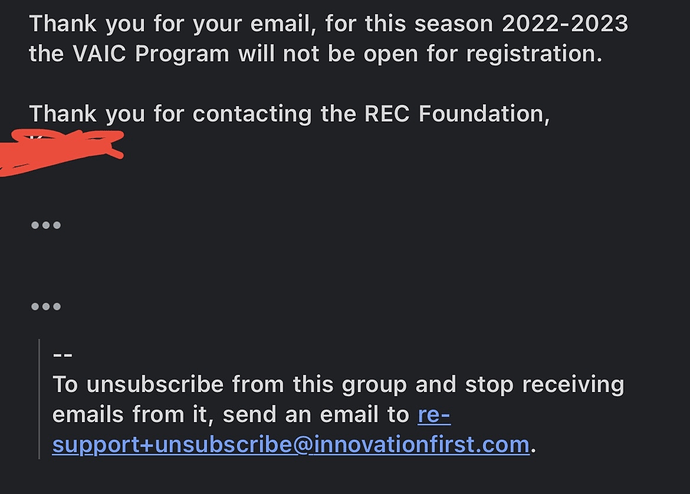 Does this means there is no VEX AI Competition this season?

looks to me that’s exactly what it means.

Which sucks b/c there was VAIC announcement a couple of months ago at EP Summit. Why can’t VEX/RECF make up their collective minds about wether or not to have this competition? Almost as disappointing as #shipsin8weeks.

I think the issue with vaic is that it doesn’t seem likely to be a very successful competition.

I wouldn’t hold my breath on vaic becoming a thing anytime soon, it just doesn’t seem like it appeals to enough people over vrc/vexu.

I can think of at least one thing that would get more high schoolers interested.

Such a shame considering RECF recently made an announcement at the EP Summit concerning the VEX AI Competition (VAIC).

Sorry to ping, but @DanMantz do you have any insights as to whether or not there will be a VAIC competitive season this season (or will we be left in the dark like last season)?

Both VEX Robotics and the REC Foundation fully intend to support the VEX AI Competition (VAIC) this season. Both organizations are working together to assure the hardware and software is ready. We do not want to repeat the mistakes from last season so we will not open registration until we are ready to ship hardware. But we do expect to be ready in October.

Regarding the email from the REC Foundation staff person, I do apologize for the incorrect communication. Our staff person intended to communicate that the registration is not yet open.

I apologize for any confusion.

I respect your opinion but based on my conversations with VEX coaches, coaches from other programs and VEX U students, I think there is a lot of interested in VAIC. VAIC is the next level of competition for many Junior and Senior High School students that have been in the VEX Programs for many years and want to challenge themselves with more programming and custom 3D printed parts. And VEX U teams like the additional programming challenge. VAIC is also attractive to students that have not previously competed in VEX. I have told Bob that I anticipate VAIC to have 1000 teams within 3 years.

Only time will tell if my forecast is correct.

I would much rather compete in a VAIC if that opportunity was available to me. During the first year it was kind of a thing, Change Up, I paid close attention with the intent to move from VRC to VAIC provided the pilot season went well. It did not, so I did the same thing during Tipping Point, watching to see if the program would exist in any meaningful form, and it has continued to not.

I have told Bob that I anticipate VAIC to have 1000 teams within 3 years.

From an outsider’s perspective, RECF, IMO, should consider merging VAIC with VexU. They both use the same basic rules today, aside from one having a driver period and the other not. The VexU 45 second auton is still 3x longer than VRC, giving AI a time to shine, while still allowing competitors the thrill of driving and controlling their robots. Retain the VRC robot sizing (e.g. VexAIU uses 2 18x18x18 robots instead of the 15 and, normally, 24) to pull in “capstone” VRC teams. Allow VRC robots to have DISABLED “AI” components on them for competitions to encourage teams to compete in both. Then, you might get to 500 teams in 3 years.

Sure, as long as I’m not forced to pay $2500+ each season for hardware that I don’t want or maybe even already have, which is what RECF currently does for VAIC.

Allow VRC robots to have DISABLED “AI” components on them for competitions to encourage teams to compete in both. Then, you might get to 500 teams in 3 years.

I think there’s a very good chance the AI components become standard VRC legal for auton just so they can have any chance of recouping the R&D cost on those things selling them to VRC teams. At which point it also becomes much easier to just use your standard VRC bot in VAIC.

I know this would be unlikely to happen for logistical reasons, but having VAIC use the previous year’s game would also actually be really interesting. The meta is fully established, leaving more time for polishing the designs with advanced machining and time to develop the programming. Plus you can reuse the fields an additional year.

In September of 2020, my team received the new parts, and as excited as we were to get started, we were met with confusion on what went where, how to use the provided system and integrate it with our code, with little documentation by our side. My team spent that season day and night working out of members’ garages to build two robots for the change up season, excited to soon compete.

The lack of updates about sensors, software, or competition dawned on me as we worked though. By March of 2021, word had become that VAIC would continue onto the next season before sensors were shipped or planned events occurred. A local high school tournament of four teams was announced later for May, three teammates attended, and with that our season ended.

During the tipping point year, my team was finally back in person. As our hardware remained unsupported for the new game, we worked hard at making our own software with Intel Realsense cameras; through the absence of sensors that were meant to release in Q3 of 2021, Q4 of 2021, before the end of the year, very soon, no update followed, late September at the earliest, October.

Registration for the Tipping Point season opened in January of 2022. My team registered, and we continued working through the next few months.

On June 3rd 2022, the July 16th VAIC competition—and the season with it—was canceled by a four sentence email.

Back when I was a first-year student, I dreamed of being able to go back to competing once quarantine ended. The thrill inspired me: putting my team’s robot up to the test, revealing its strengths and weaknesses against other teams, comparing strategies and designs and being one with the robotics community.

But two years later, I found myself holding back tears to the empty robotics lab as sibling vex teams competed out of state. I was so happy for them - yet I was still awaiting an opportunity to do the same.

Today, I am a senior. This is my third year doing Vex AI. It has been two and a half years since I have attended a competition.

This year, I am continuing with the same uncertainty. I am exhausted. I am hurt.

I’m writing this to illustrate how difficult this has been for myself and others. Working years towards a constantly changing goal, only for it to vanish into thin air, is a crushing feeling. I would like to make a few suggestions.

I entirely understand the development of the 3D vision sensor has been difficult for the VAIC team due to supply chain shortages and the unfortunate timing of COVID-19, but change needs to happen. Thank you to the entire VAIC team for the dedication through the past few years. It still means so much to me.

Dan, I truly hope that when I graduate I can remember this competition in a different light.

Thank you for your impassioned response. We truly tried to have a VAIC season last year but we hit road blocks every step of the way. It’s honestly been one of the more frustrating things I’ve personally dealt with at the RECF. In hindsight, I do wish we had not committed to having the AI competition last year. But I can see from your message that the REC Foundation failed to adequately communicate with the community. We need to do better.

The REC Foundation has assigned a new staff member to lead the VEX AI Competition program. She is meeting with VEX weekly and also gives me weekly updates. As you know as one of the registered teams from last season, your team will be the first to get the new hardware. I do understand your argument that we can have VAIC without the new VEX sensors and we are not requiring teams to use them, but we believe this hardware and software is necessary for most teams to have a good experience (this is based on feedback from the 2021 beta season).

Feel free to email me directly (if you are under 18, please include your coach, parent and / or legal guardian) and I will connect you directly to the RECF VAIC Program Manager to continue the discussion and for you to share your ideas and experiences.

Thank you for your message and I apologize that we have let you down.

@DanMantz is there any chance something like this will be available to MS students? Just wondering, I’m a middle school coach, but I can’t follow my kids when they go to high school

Has there been any updates with Spin Up and VAIC?