Can someone explain why exactly all of the vex parts have square holes? It doesn’t seem to make sense as everything that goes through them is circular (save for shafts, which need to be put on a bearing anyways).

It seems to work, but it makes CAD just a tad bit annoying.

The bearing blocks use the corners to fit snugly.

The bearing blocks use the corners to fit snugly.

I imagine the bearing blocks aren’t locked into having square corners however, and can fit snugly in circular holes too if the holes on the metal are larger than the holes needed in the bearings.

I understand it’s not likely to change ever, but when the system was designed I imagine circular holes were at some point one of the options. It would just be interesting to know what advantages this design has over other constructor sets (tetrix and Lego come to mind)

I’m sure there’s technical reasons why the square holes were chosen, but if nothing else I think square holes look much better than round ones would.

Although I agree that from the point of using shafts and hardware, round holes could be better.

It should be understood that the square openings associated with the mechanical components provide functional value, but also are ornamental in nature. It should be appreciated that the geometry for the openings (e.g., opening 204) and shaft 1302 could have been another shape, such as a hexagon, and produced the substantially same functionality. By making the openings consistently substantially square (with rounded corners), a separate and distinct ornamental value is established with consumers of the construction set.
[/quote] 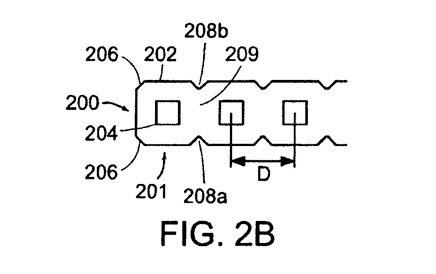 Oooh. I have to admit, robots made with tetrix kits just don’t seem look as nice as vex robots, so its definitely working.