Recently my team and I went to a competition in NJ. Everything seemed well on the test fields so eventually we went up to our first game. About 10 seconds into the game one of the motors on the drive train stopped working and all we could do was spin in circles. We swapped out the motor and regeared it and various things around the wheel. This continued throughout the entire game and even continued to our next 5 games as well because no one could figure out the problem. All 4 of the motors on the drive are 1:1 and internally geared for speed, all of them eventually began to fail. I should also mention that the problem isn’t that they don’t work but rather that they stop because of a bit of stress over a short period. No other team was having this problem from what we could see. They are all attached to a power expander and are attached to 4 of the 8 ports in the middle of the cortex.

It seems that you are tripping the circuit breakers inside the cortex.

This has happened to our teams multiple times; as far as we could tell, every time it has been excess torque on the motors. Did you feel the motors after they burned out? Were they hot? If so, I would look for ways to decrease stress on the motors (add in more bearings where needed, make sure your axles aren’t bent, etc). I especially think stress is the problem here because you switched out the motors and the same thing happened.

They were warm but we did relieve a ton of stress off of the motor after the first competition. We put excessive amounts of space on the axles and even removed an encoder, still, there were issues. I will check it out to see if any axles are bent but that would mean that every axle on the drive train is bent. I believe that it is an issue within the cortex or power expander.

Is there any fix for this or do we need a new one?

Is there any fix for this or do we need a new one?

Tripping the PTC inside the motors or cortex (or power expander) has happened to almost every VEX team at some time. In nearly all cases the root cause is the way the robot is built, perhaps it is too heavy (50lb ?) or the gearing is incorrect, or the built quality has issues.

Perhaps post some pictures so we can see what the robot looks like and how the drive is built.

This has happened to us too but fortunately though a few days before a competition. Our drive was similar to yours, all four motors were internally geared for high speed, 1:1 direct drive, and they began to reset/trip especially when going over the bump. We changed them to high torque and the problem ceased to exist. We also put the Cortex on shocks absorbers to relieve stress on them as it also resets when going over the bump.

Our design isn’t particularly heavy. (Excuse the dog paraphernalia in the back) 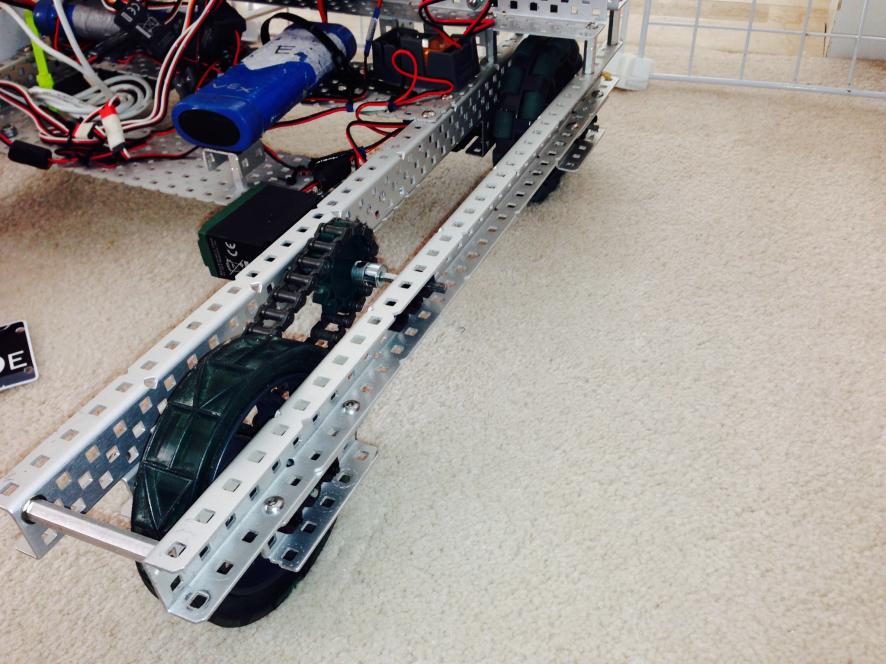 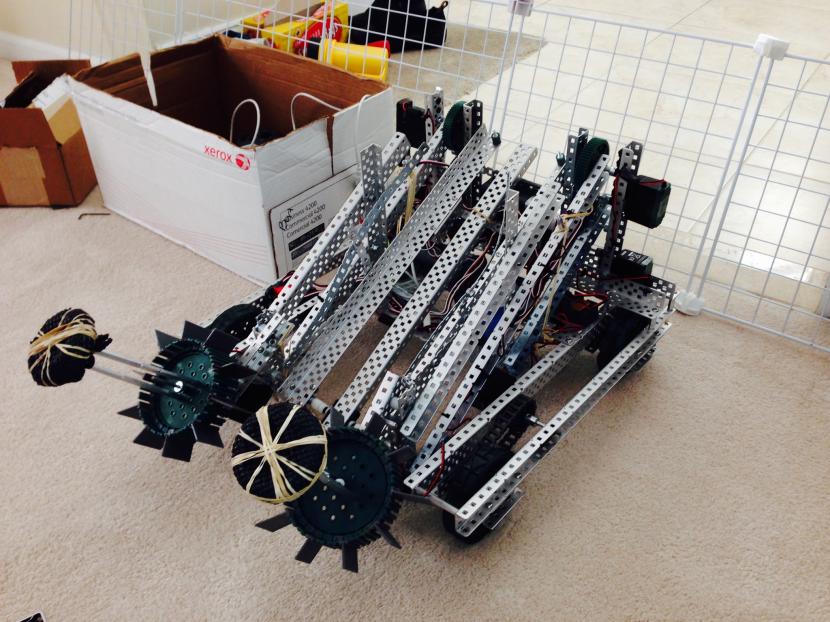 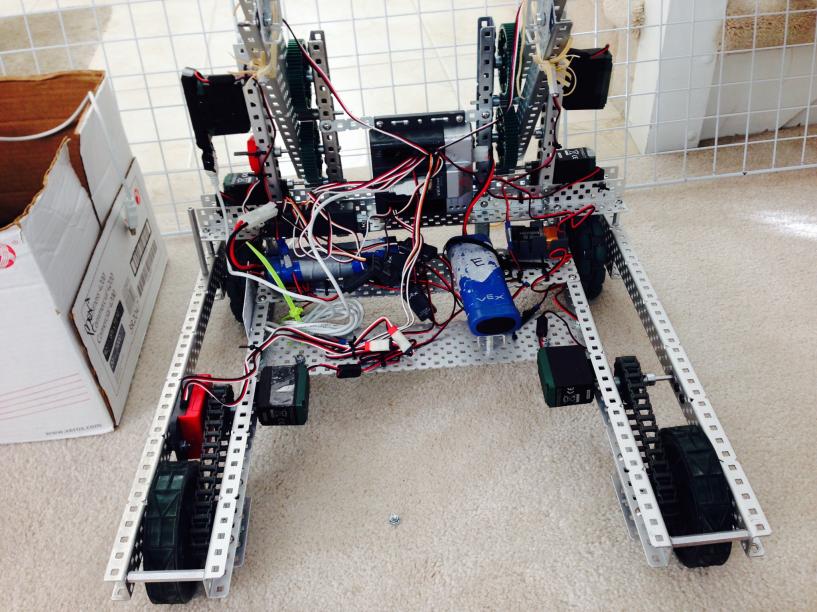 My first reaction is that the drive needs more support, I only see the one standoff between the two C channels near the front. When the robot turns the chassis probably flexes and causes more friction on the axles. With the high traction wheels on the front you would notice this far more on the field tiles than a smoother surface. If you have some 1x5x1 C channel I would use that to connect the 1x2x1 c channels together, alternatively add several more standoffs between them.

I think we’ll out on some more stand offs and regear the motors for torque. I didn’t want to do that because we’ll be very slow; but i guess its necessary.

I’m assuming the robot is tank drive (correct me if I’m wrong) and if so having the omni wheels in the front and the high traction in the back seems to help a little more with turning. The onmi wheels generate less friction then the high traction wheels which could possibly allow you to keep the speed ratio rather than turning it back down to torque