Hello everybody,
This past weekend, I figured out that one of our 2 intake motors was not running and has never ran. somehow the port it was plugged into wasn’t working. It always seemed a little week, but it seemed to work well. After realizing this, I quickly re-wired and increased the internal from high speed to turbo on both and it works wonderfully.
What stupid mistakes have you guys made recently or when starting vex?

Misaligned wheels, no while true in drive code, don’t even get me started with autonomous, the list goes on…

driving our robot off the table probably costing us a match in a tournament with the best teams in the world, forgetting to give back a backup battery i borrowed

Our “veteran” programmer forgot to define certain encoder values, you know, the ones where the robot is supposed to stop moving

Once, in our first year (only our second competition ever), We decided in the last minute before one of our qualification matches started that we were not going to run our autonomous, so I ran back to our pit and downloaded what I thought was our program that had the autonomous code removed. It was actually our program from a month previous to the event, from before we changed some of our wiring… It was not fun to watch our do random stuff every time our driver tried to drive forward.

Last year our senior programmer changed our autonomous right before a finals match, but he never gave back the key. The head ref offered to let us replay the match if the other alliance agreed to it. They did not, so we ended up losing the tournament.

Back from Toss Up worlds, we were about to go up for a match and I forgot to do a pre-match wire check… Turns out one of our 4 drive motors was unplugged and we weren’t able to drive… I think we knocked a large ball off the rail and got one bucky in the high goal. 10 points…yay haha.

Back from Toss Up worlds, we were about to go up for a match and I forgot to do a pre-match wire check… Turns out one of our 4 drive motors was unplugged and we weren’t able to drive… I think we knocked a large ball off the rail and got one bucky in the high goal. 10 points…yay haha.

I did something similar at the BC provincial championships last year, A wire had come unplugged from our scoring mechanism, so the only thing we could do was de-score some of our opponents cubes. It cost us the match, and the 2nd place position in alliance selection. So potentially costing us a spot at the worlds.

Also, at our last competition I forgot to switch to the regular autonomous from our skills one, all the balls overshot and we failed to go into the court during autonomous.

not at vex but in FRC, I was on the drive team, and we had a slow leak in our pneumatics, so before we went on for a match, we unplugged our compressor from the robot power supply, and used an external supply to run the compressor. of course I forgot to re - connect the pneumatics, and so none of our devices worked the whole match.

in VEX, lots of bad batteries, forgetting to plug stuff in

lol i somehow managed to forget to put a bearing on a spot where an axle was…carnage was the outcome. I have kindly attached an image for all to see, do enjoy a brain fart moment 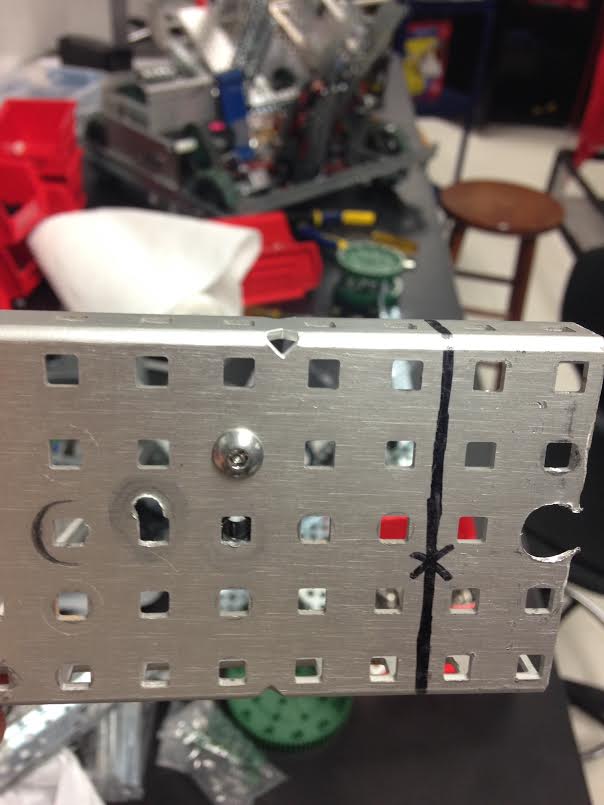 We usually have the robot off between elimination matches. Last competition, we turned our robot off as usual and waited for our match. When autonomous started, our robot wasn’t moving, so I looked at the Cortex lights and realized that I forgot to turn it on. I nonchalantly bent down and turned on the robot during autonomous. I got a warning for that, but at least we got it turned on for driver control

@Vex 9185 I’m pretty sure we were at the same competition when my teammate did the same thing…
We were in a match against your team (I think), and our robot did absolutely nothing during autonomous, so I had to turn it on right before the driver control period and no one noticed when we did it…

We also had a problem where our motors were plugged in backwards?! Our robot did a full 360 during autonomous because it couldn’t drive straight and the whole match consisted of us driving in half circles…

At our first NBN competition, we got paired with a robot with a broken flywheel, so we told them to try to push balls into the low goal and play defense. In the enemy alliance, there was a lifter and a robot that could be lifted by the lifter, so we told our alliance member to make sure that they could not lift by keeping the the lift-able robot out of the climbing zone. They mistaken our robot as an enemy robot, so they started ramming us until our wheel fell off lol. We laughed it off afterwards because we haven’t seen that happen before

We had our intake rollers going backwards and the ball shooter unplugged. XD

Well the only loss my team has had this year was the autonomous downloaded wrong causing the flywheels to run one the correct way the other the wrong way. Then a ball came out of the intake, jamming the flywheels and costing us the match. We lost by five points!! We could’ve overtaken that in a second if the flywheels weren’t stuck!

Well the only loss my team has had this year was the autonomous downloaded wrong causing the flywheels to run one the correct way the other the wrong way. Then a ball came out of the intake, jamming the flywheels and costing us the match. We lost by five points!! We could’ve overtaken that in a second if the flywheels weren’t stuck!

We took the battery off of our robot to let it charge during lunch. We were in the first match after lunch, so we rushed to the queuing tables. As soon as autonomous started, we found that we forgot to put the battery back on the robot. Cost us the match, and an embarrassing defeat by our sister team.

We uploaded new code and didn’t see that it had failed to upload. As a result, our robot did nothing.

At Worlds last year, our program started throwing really weird errors, so I started doing damage control. I took out the function that controlled the intake, since that was a PID loop and part of the error, but forgot to add another way of controlling the intake in driver control. We nearly lost a 2v1 (we were the 1) because of it. It was the Engineering Division Q74. About halfway through the match, I figured out what I did wrong, and I had a fix ready by the time the drive team made it back to the pit.