Supporting Ukraine and hoping for the peoples safety

Regardless of where you stand politically, I think it’s not very controversial to say war and mass killings are bad. The US govenrment says that Ukraine will be invaded by tonight. Just making this thread for people to express hopes and (if you’re a theist) prayers that if Russia takes over, they won’t kill everybody there. Same thing with the Russian soldiers, who most likely aren’t homicidal maniacs. I know it’s a little darker for these forums, and we cant do anything about it (unless Putin just so happens to be a Vex engineer), but sometimes it’s nice to just say it.

Your statement isn’t wrong, but the forums are just not the place this should be posted. This is a place mainly for discussion about robotics, and it may technically violate rules for posting on the forums. You have a good message, but this isn’t the place to post it.

I know, hence why I said I get why she did it. Idk, I don’t have discord or anything, so I just thought I’d say something somewhere, and I chose the forums. the post does violate terms though

I do think this topic is very important and needs to be brought up but let’s try to keep the forum to robotics topics only.

I agree with this. Although it is important and needs to be talked about the forums is an inappropriate place to talk about it. This forum is dedicated to robotics and not only is this off topic but this topic also violates the terms. Let’s try to keep the forums on topic.

I don’t have discord or anything, so I just thought I’d say something somewhere, and I chose the forums. the post does violate terms though

so… you decided to post it on an educational robotics forum used for discussing the engineering, competition, and projects related to it while willingly acknowledging that it violates the TOS? won’t question it but alright lol

Actually I don’t see anything wrong abt this topic - it is posted in the Chit-chat/Rumor Mill.

We have seen some other off topics, and nothing got to do with robotics threads posted in this channel.

Just need to keep it respectful.

Just need to keep it respectful.

Agree with that … there is so much around robotics outside of “robotics” that really impact our teams globally. This is one of them.

Agree with that … there is so much around robotics outside of “robotics” that really impact our teams globally. This is one of them.

Yup. Totally agree with this statement.

And for the rest of the young ppl out here - never underestimate the ties and links that you have forged in robotics. It might help to save some lives.

Yeah, above all else we gotta keep it apolitical and just express hope that they minimal amounts of people will die on both sides.

Sometimes events outside of robotics could become too important to ignore and could potentially affect everyone. Like the reports about an obscure new virus originating in China about two years ago.

The significance of current war is that Putin threatened “unimaginable consequences” for anyone who dares to help Ukraine defend herself against his invasion. Which anyone could guess is an allusion to nuclear weapons.

It is impossible to just watch how one mad man is bullying the world while killing thousands of Ukrainians as well as his own soldiers decieved by the years of intense brainwashing and propaganda.

So what can we do to help Ukraine?

At the very least you can sign this petition started by the Russians who are against the war: 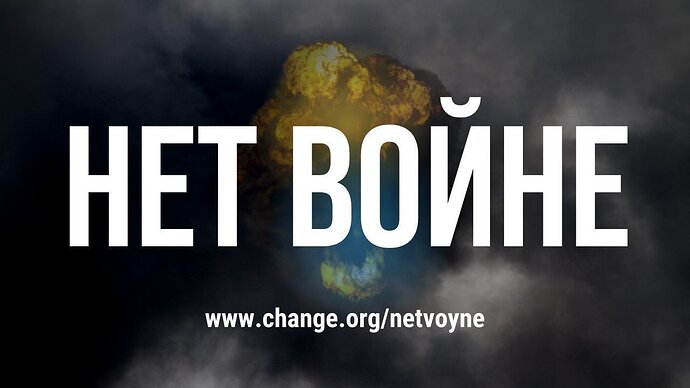 It will show them your support and they are the only ones who can stop the Putin’s war machine from within, while outnumbered and outgunned Ukrainian solders heroically defend the freedom of their country.

Remember, Putin choose to invade Ukraine because its young democracy stands in stark contrast to an authoritarian dictatorship that he has turned Russia into.

And also you can fly a little flag

on your robot at the next competition as a sign of your solidarity to stand up to the biggest bully out there.

I like that last idea a lot. I’ll get to coding it!

lllyana, i find this very moving. Thank you for the great post. im going to print out the ukrainian flag and put it on a licence plate to show our support.

I will do that

Ah yes, finally a Russian. Well, last time I checked, Ukraine isn’t trying to BE a Nazi on the imperialist spectrum. Quite literally Russias goal is reconstructing the Soviet Union. sounds pretty ultranationalist to me.

Also does every “anti Nazi democracy” like the one in Russia forcibly displace 45% of the population of a country because they believe them to be inferior to Russians?

Welcome to the forum! Ukraine wanting to join NATO to defend themselves against Russia does in fact not justify Russia invading them, rather I’d say it strongly justifies Ukraine’s need to join NATO.

From what frame of reference are you getting that Russia is trying to reconstruct the Soviet Union?

Genuine question though. Why do any of you feel like it’s a good use of your time talking about the Ukraine situation on the VEX ROBOTICS FORUM. I mean this in the nicest way possible, go touch grass. Your opinions on Ukraine are not nuanced or clever.