After being involved with VEX Robotics as a supportive parent and coach for the last several years, I thought it would be really fun to write a novel set in the world of VEX Robotics. My new book is called TAKEOVER and is now available on Amazon. The story is about a fictional robotics team and their adventures through the Tower Takeover season and into the start of the Change Up season.

Here is the promotional page and book trailer:
TAKEOVER information 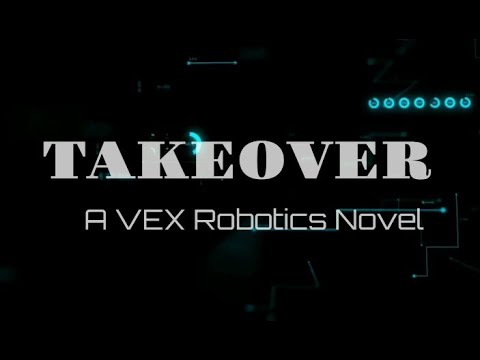 For any of you who end up picking up this book, I hope you enjoy!

Hmm, sounds interesting! I may have to read it.

Having personally tried writing novels, I applaud your endurance in managing to write an entire one.

as a nerd i love the idea of making a book on vex, hope it turns out well!

Wow! Vex truly made it into the pop culture!

In book two, you should include the game reveal video, but make it like propaganda. That would be interesting.

Disclaimer: I’m not trying to be mean just for the sake of it, I just have a strong opinion on this book.

This was posted in a chat room that I’m a part of about a week ago, and I got a chance to read the first 2 chapters (free trial thing).

After reading what appears to be a sizable chunk of this book, I think I can give it a fairly objective review.

I’m not saying that I could do any better. This is a million times better than anything I could ever hope to come up with - but then again I’m not a published author. Mr. Miles here is.

There were some specific moments in the preview that stood out to me as particularly bad. For example, let’s take the very end of chapter one. When I was reading over this section of the book, I quite ironically found the description of the team “The Best” severely irking. Miles mentions how this team always introduces themselves by saying: “‘Hey y’all, we’re The Best’”. For a number of reasons, no one in VEX talks like this. First of all, it’s unsportsmanlike to do so. Bragging and boasting about how great you are (and by the transitive property, how bad everyone else is) is a great way to find yourself disqualified from judged awards like Excellence and Design. Secondly, it’s a bad idea to be cocky, especially during a tournament such as this one where advantages can shift in an instant. I think you would have a hard time finding any real team who describes themselves like this fictional team does.

“The team named The Best was extremely annoying” (Miles). I’d like to point out here that if I submitted this sentence as part of a creative writing assignment in my English class I’d be laughed out of the room. Adjectives like “annoying” tend to sound bland when used in more complex narratives like these. Additionally, “annoying” is subjective. There is no objective way to define someone as annoying. A character could feel that someone was annoying: “Kenzie felt that “The Best” were annoying people to talk to”, but the way that Miles set up this sentence feels lazy, uninteresting, and is not conducive to the telling of a good story.

These two examples were just from a single paragraph of the book’s 4-chapter preview. I could go on listing other very fundamental faults in the storytelling, but I feel I have already made my point with just the two.

While I greatly applaud the time and effort Mr. Miles has put into this book, from both a literary and technical perspective I simply cannot recommend it. The writing feels… off… in many places, and Miles seems to be in a sort of uncanny valley between knowing enough and not knowing enough about VRC to write a book about it. It seems vastly too technical about such a niche hobby from an outsider’s perspective, and not nearly accurate enough from a competitor’s.

Once again, I appreciate the effort that has been put into this book, but I don’t feel that the level of writing here is worth spending $12 on.

I appreciate your honest thoughts on this book. Beyond this I appreciate the kind way in which you expressed them.

I also have never encountered a VEX team that acts as blatantly cocky as The Best does in this story. But, I have indeed seen a small handful of teams along the way that exhibited mild expressions of cockiness. As you pointed out, this attitude didn’t help them at competitions. But I do believe such attitudes exist at times. This is one of the reasons I am very thankful for the RECF Code of Conduct. I love the expectations it sets and how it authoritatively shapes VEX competitions. I believe the Code of Conduct is very much needed and I credit it for playing a large role in helping to keep everything in check and making VEX the wonderful community that it is.

When The Best is irritating and irking in this story, it is by design. I do, however, believe TAKEOVER treats the attitude of the The Best in a negative light, and this was also very intentional. The extreme antics of The Best are what the Robonauts must overcome and it is my hope that this battle is what others will find to be the makings of a good story.

Also, just to clarify, this book contains 43 chapters and is roughly 53,000 words (paperback is just under 200 pages). The story continues and much occurs after these first several chapters. But no spoilers!

Just an FYI @nathankmiles, the robonauts are a real team in my region.

Good to know, I think Robonauts is a great team name!

Of course, all teams, people, and competitions in the book are completely fictional.

I might point out here that they’re not just a real team. The Robonauts already one of the most successful and well-known, Vex (and FRC!!) teams of all time…

Anyway, I’m impressed that someone got a book about Vex Robotics published! After watching the trailer, it seems like the premise of the story is for this one better team, the “Robonauts” (who are not 118 for some reason) to overcome this other team, “The Best”, who are…“annoying”. Surely there is some more plot than this, because a. Teams in Vex generally don’t act like that and b. If they were “annoying” to the point of rule-breaking (not that hard to do), they’d just get sent home or receive a warning. Factoring in what Taran had to say about the preview, I can’t see this book being successful. Thanks for sharing though!

After doing a quick lookup, it looks like there are also a number of additional teams with this name, both in VRC and VEX IQ. The teams in TAKEOVER are completely fictional with no connection to any real life teams who happen to share the same name.

The first few chapters do set the stage for lots more to happen in the story. The “battle” mentioned in the trailer that the Robonauts fight does indeed play out in detail. But I decided not to present these details in the trailer because I would much rather readers discover and enjoy the story as they read it. Hopefully this will allow for a more suspenseful and exciting experience.

The attitudes and actions of The Best in this book are definitely exaggerated and not realistic when compared to how teams act in real life - but this provides the literary conflict I felt was needed for a good story. VEX and RECF certainly do a wonderful job of keeping competitions clean and friendly.

I will say, my team almost named our robot Columbia last year, but instead we went with Saturn(I’m team captain, and a huge space nerd.)