Here’s a 4-Bar Tray concept I made for this year. Just a concept, with a million more on the way as well. I plan on animating this in the next few days. 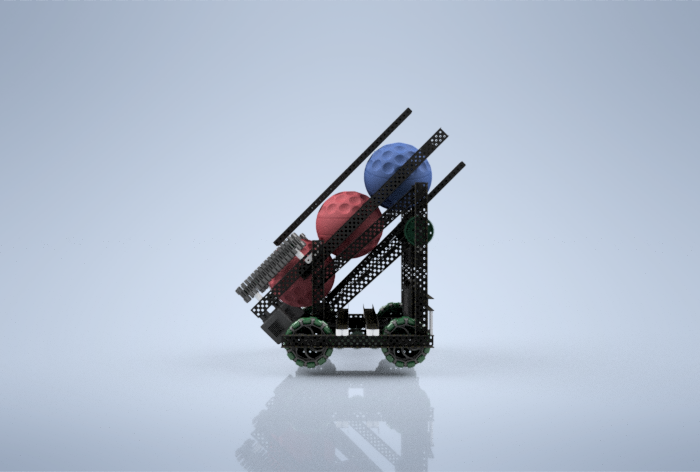 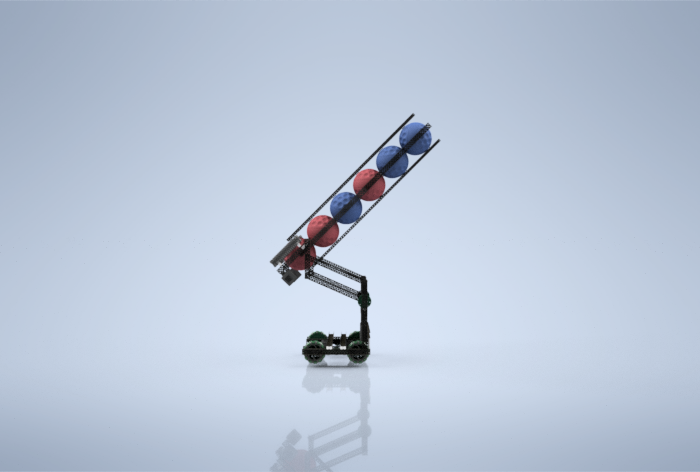 Nice! Do you really think one robot is going to hold 6 at once?

Though the balls are relatively large, they certainly don’t have much mass and as we’ve learned through tower takeover, the v5 motors can easily handle that amount of mass

Interesting. I was wondering more like strategically, do you think the strategy is going to be to hoard a bunch and dump them all in the end?

I don’t think this will be a hoarding game though it can be given the scarcity of balls. Cycling through the towers will likely be more important than preventing your opponent from cycling. In other words, out-cycle your opponent.

are the intakes able to descore? From the looks of it, the angle seems to be too large. I know it’s a really early design, but I’m just curious.

Yea I’m fairly sure they would be. It would be designed to be able to pull all of the balls out of the base of the goal.

I don’t think this will be a hoarding game

Well, it could be a conceivable strategy to hoard 3 of your opponents balls each. With 6 of them out of play, they’re tasks get a lot harder.

Nice job by the way. It looks pretty amazing.

Thanks. I’m trying to animate it today.

I learned Blender just for this!

Do you think a cycler robot that de-scores and scores at the same time could be meta?

Whats the dimensions on this? Would the first stage tray/tube fit in size?

Probably. I can’t size it for sure, but it can go down much further than it does in the animation. The tube thing is held up by nothing other than computer magic (it’s a concept, not a design), but the real one would probably be much more space-efficcient.

Yeah, cycle time is key, both to be more efficient, and to avoid defense, since the goals can easily be blocked off by even non wallbots

Uh, might have a shroudbot out in a few days

I believe it would be better to just have a row of sprockets perpendicular and above the balls to intake them, similiar to goliaths in turning point.