Okay, so I posted our last robot a little less than a month ago before the Omaha North tournament. In the simplest form of expression, we sucked. I’m sorry for all the people who asked for footage, we were so busy fixing that we didn’t really have the thought to record it all. The previous robot is shown in this thread: https://vexforum.com/t/team-4405b/20307/1 . We decided the six-bar with claw just wouldn’t be effective due to its low object capacity. One of my first ideas early in the season was the double tank tread system so we built the new bot off of that. I know many other bots have used this but I built our version without referencing other examples so it could be very different or very similar to designs of the same kind. I would appreciate constructive criticism and comments. Always trying to improve. Essentially, it is a 4 motor drive, all driven direct. Large omnis for wheels, haven’t really has problems getting pushed around and enjoy the smoother turning. A 1:1 ratio has been just fine for our team so far. It has a 2 high strength motor 2-bar system to which the tank tread conveyor system is attached. The tank treads are powered by 2 motors. This leaves 2 motor for which I have an idea that I don’t want to post before our tournament… can’t give it all away.

It has a 3 object of any type capacity. The arm allows for backwards scoring which may be able to reach the middle 30 from the isolation (haven’t been able to try it on a field yet). Finally, you will notice the chain links on the conveyors, I put those on to fit in the box, the treads would stick out. I thought that was clever on my part.

P.S.: Sorry for the length, you can just look at the pictures if you want. 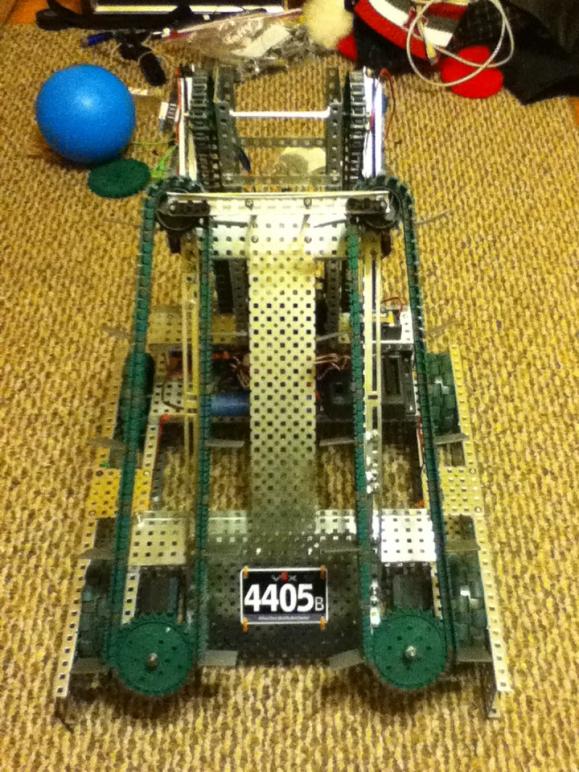 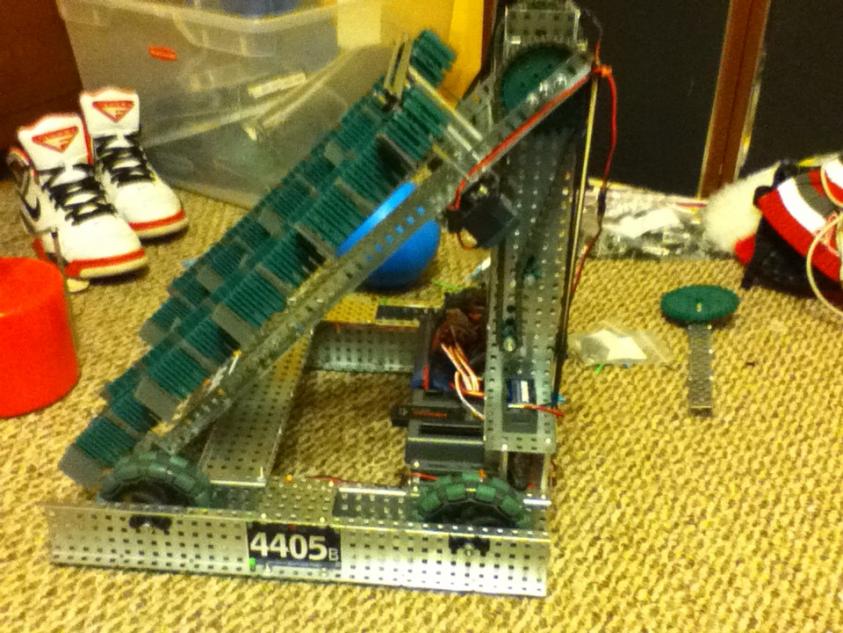 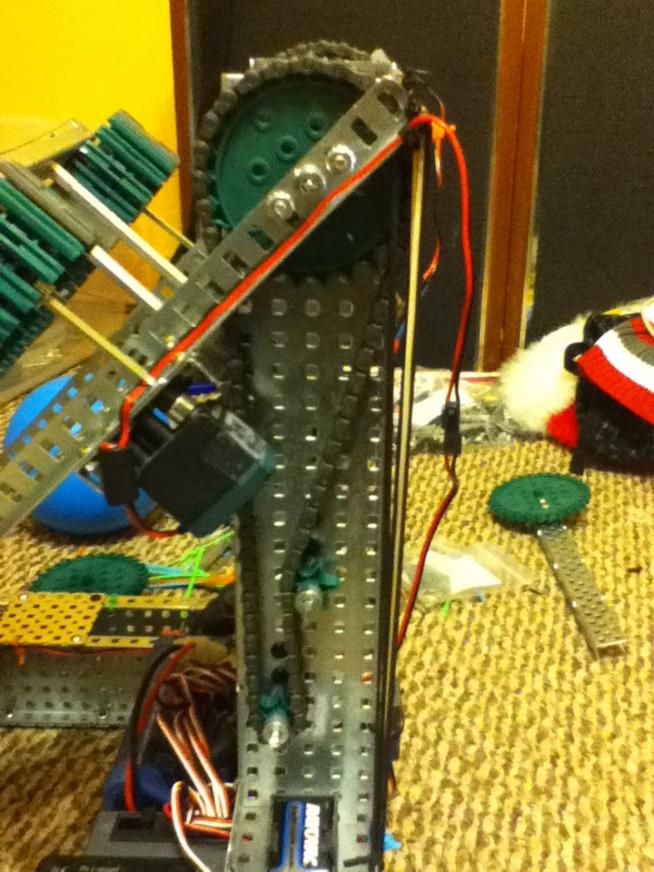 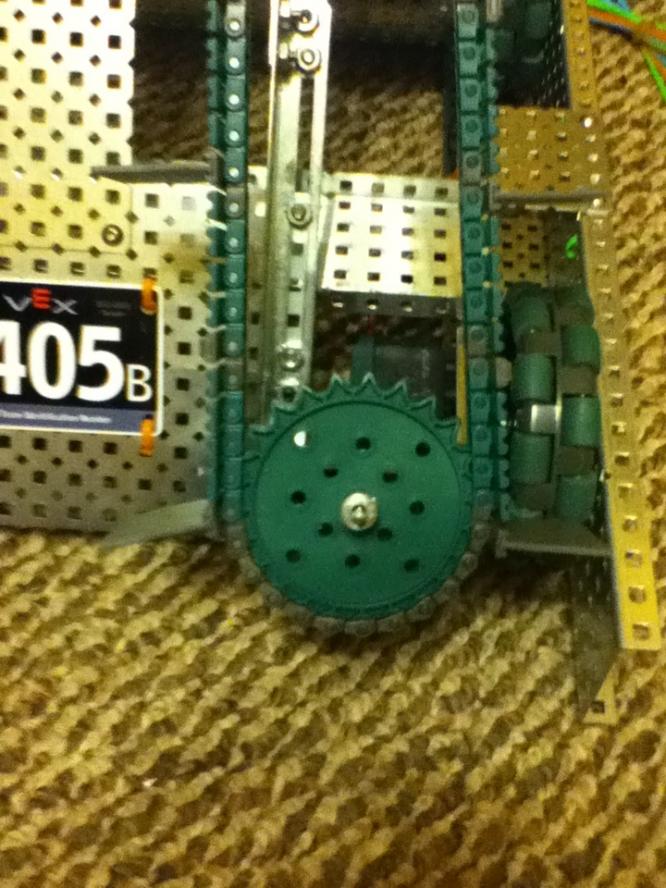 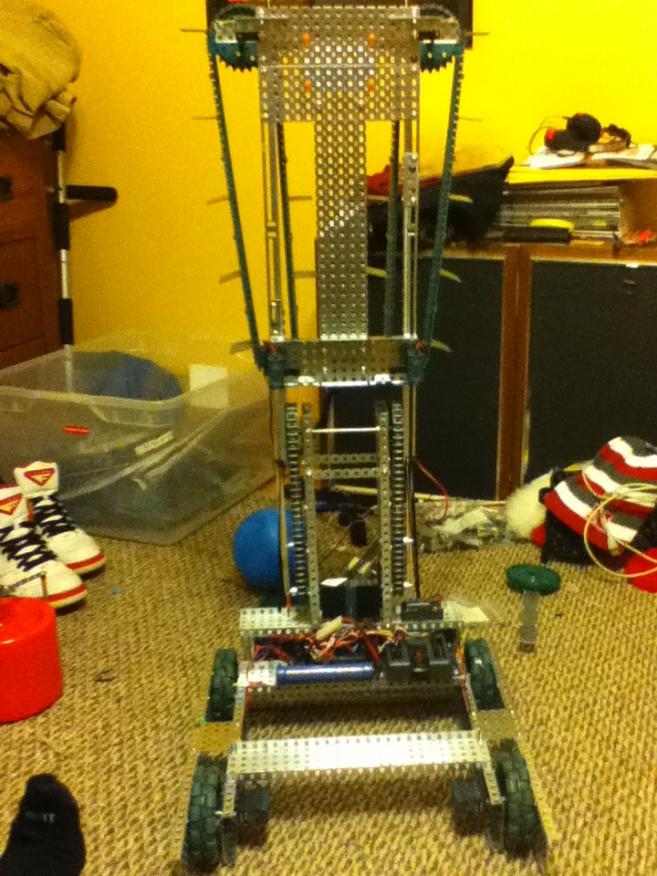 I am curious as you why you went with a dual tank tread design rather than a “New Zealand Design” AKA 6-bar or chain lift and an angled ramp with some sort of sucker(s)/intake rollers. I mean no offense, but to me it seems like in general they are more effective. What is your reasoning with going with this design, especially since you had to re-build your entire robot to do it?

I saw how fussy some of those designs tended to be and the pick up time on the objects was a little bit longer than the couple tank tread intakes I’ve seen. When executed perfectly, I do believe it would be better. I started off this design based off of the roller concept but I just couldn’t get it to pick up objects fast enough and get a significant amount of objects on the chute before it would fail in some way. This design gave immediate pick up to any object I drove up to so I’m satisfied with the results.

I really like your design. One of our teams has a similar design, and the lift for your intake is pretty similar to my teams lift.

A few questions regarding your robot.

Looks like a great bot! Good luck this year!

My only question is this: would there be any reason you would want to place an extra gear along the intake treads? Somewhere in the middle I mean. It seems like there’s a lot of unsupported chain there, but I guess if it is tight enough it wouldn’t be a problem, just wondering though.

It looks really simple, but if it works, I’m all for it.
Good job!

Length is no problem, but a bulletted list of features would be easier to read.
I like the Chain powered 1-bar arm with low motor placement.
Lots of cantilevered axles in the arm system though, adding even a 1x or 1x1 angle to the outside of the arm axles would be helpful.

Okay I’ll go in order of the comments

Bot-E: thank you for the compliments
1 The intake gets to full height in ~1 second
2 I would say all three objects score in 3-5 seconds
3 We have the Mount Michael tournament this weekend so I will most definitely try to get some film of the bot
4 We haven’t done one yet

Paper: I’ve considered placing a tank tread roller around the middle but I don;t know if I want to sacrifice the molding effect the treads have right now. I thought about maybe working out some elastic solution to that and I’ll post on here if I come up with anything.

jgraber: Thanks for the tip. I will watch to see how much the bending of the axle affects it. Only the axle that the arm gear is attached to has significant bending so I’ll watch for it.

Again, thank you for all the comments and criticisms.

Just an update, the tournament today went really despite some major connection issues that were prevalent in many teams. In the middle of a match the vex net would just drop out. I don’t know if any other people have encountered this but it screwed us in our one qualifying loss and through the whole elimination matches. But, alas we still finished 2nd in rankings and loss in the semis. Competition was very heated through the whole tournament and I applaud all participating teams. Our bot really proved itself and enforced the concept of simplicity can still be effective. I will post some footage when I get a chance.