Hello all, This is my first post so bear with me. I’m from Skutt Catholic Robotics, team 4405b (Men of Steel) in specific. We’re based out of Omaha, NE and went to nationals last year. We have the Omaha North tournament this Saturday so I wanted to put our robot up for some last minute criticisms and comments. I’ll just post some pics I just took inbetween class and some basic details.

Details:
-super fast 6-bar arm
-arm powered by 4 393 motors
-floor to top time is ~1 second
-arm height is ~33"
-drivetrain is 4 269 motors geared slightly for speed
-simple but reliable claw
-picks up all objects in all orientations
-very light, probably could gear it to go faster

Pardon the low image quality, had to take the pics on my cell. Any criticisms would get greatly appreciated. 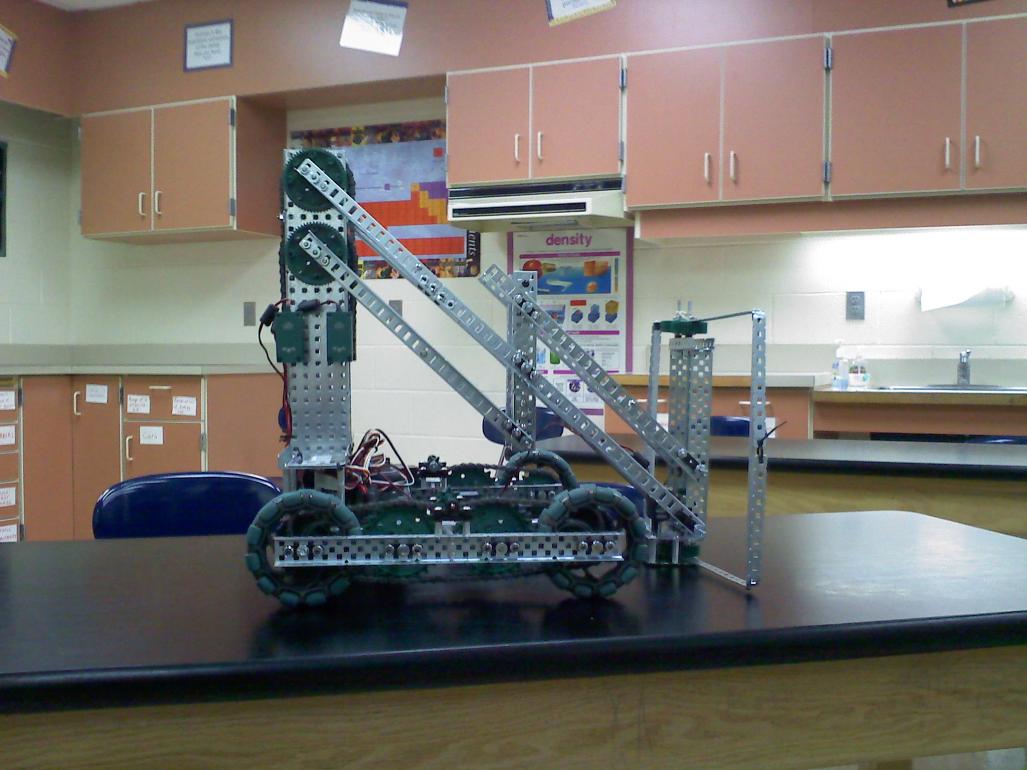 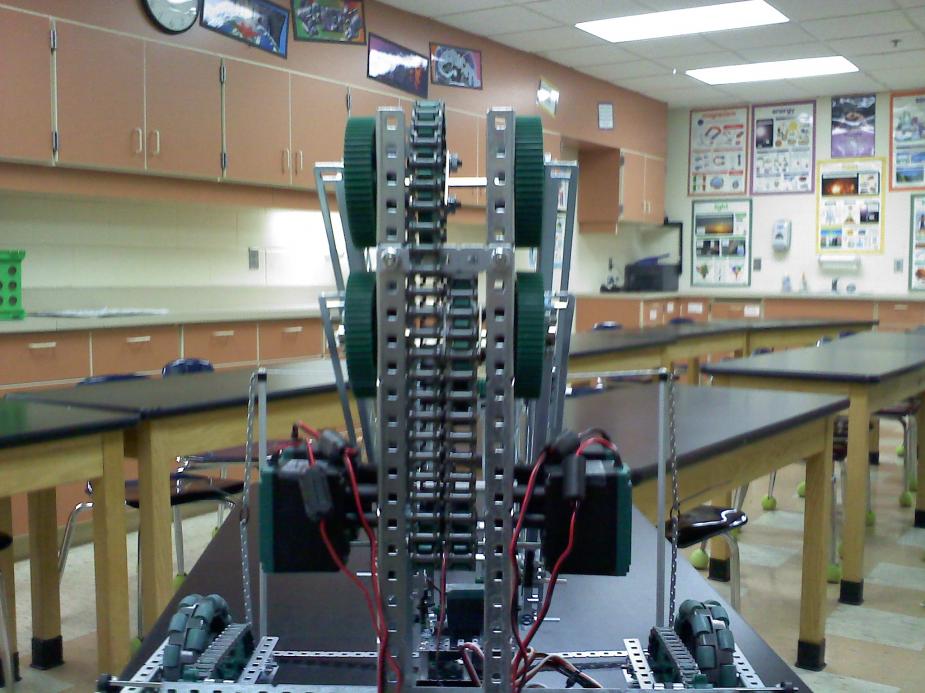 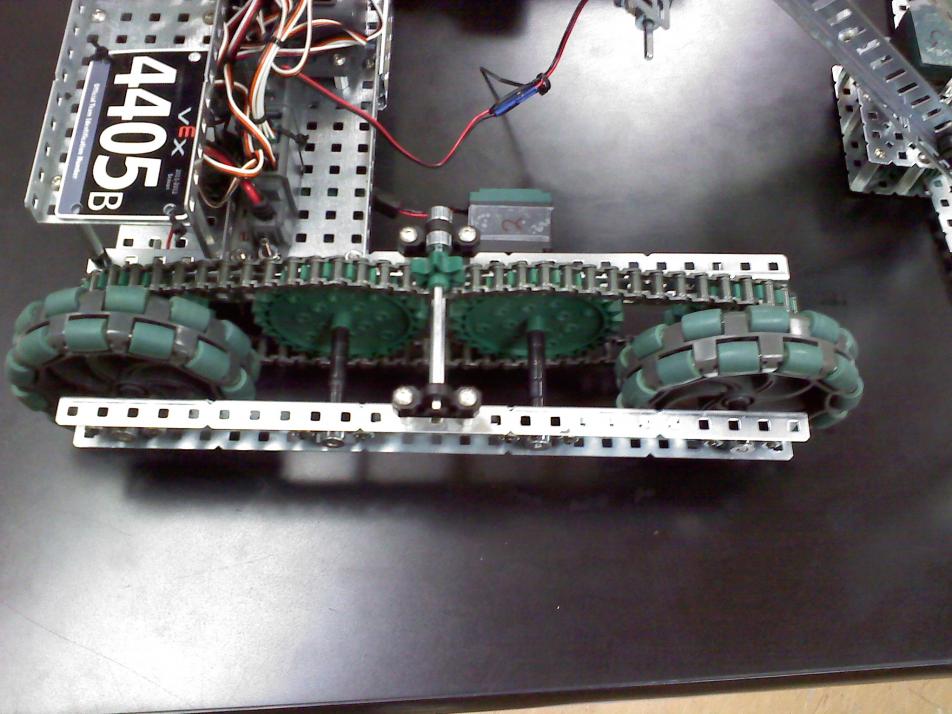 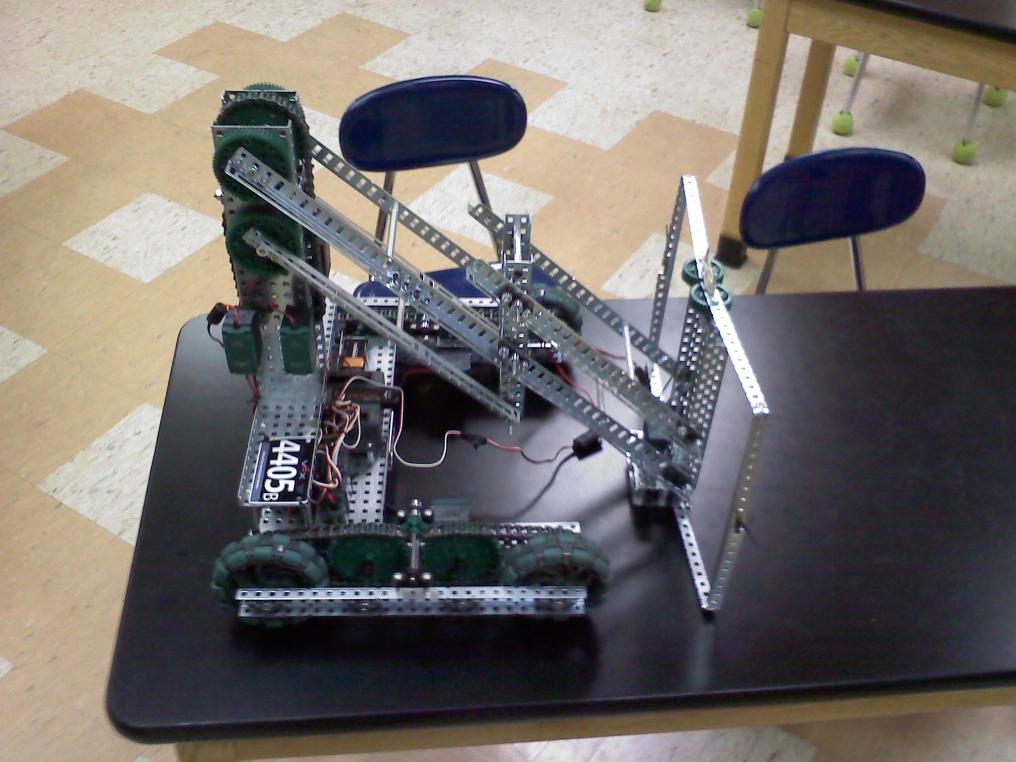 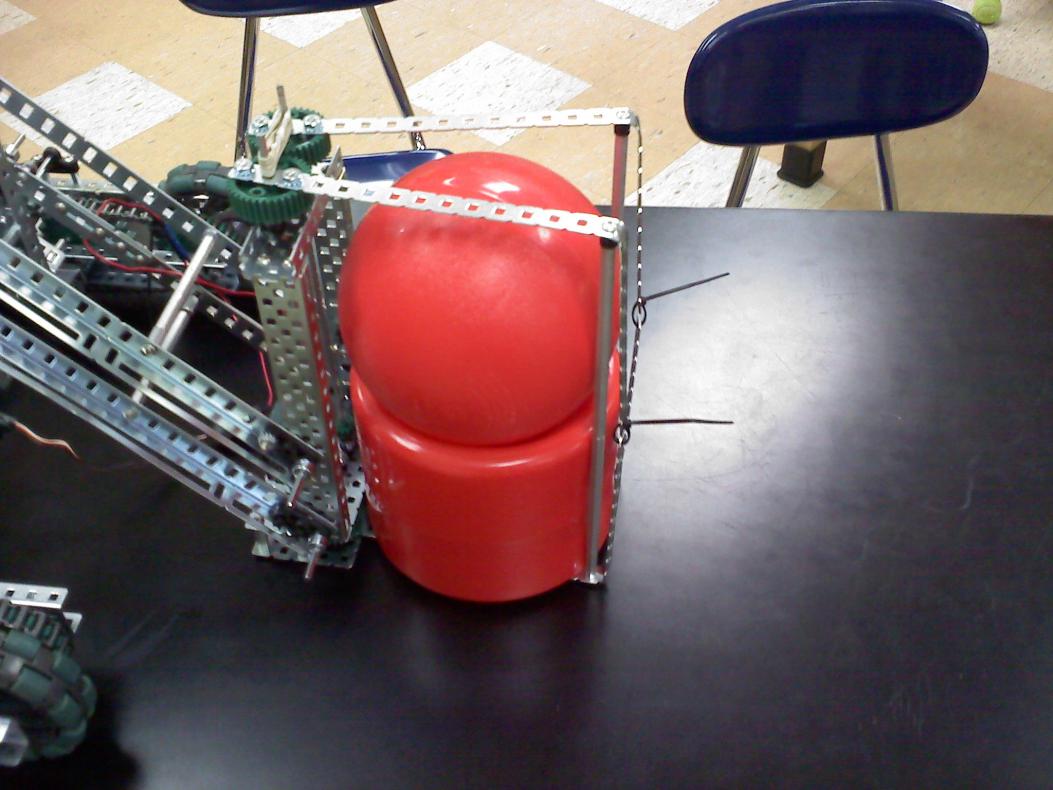 Low chain wrap makes the drive sprockets likely to slip;
I suggest more chain wrap, maybe move motors farther apart and push idler lower?
Arm gears servo no purpose, other than force expanding from axle, and arms are cantilevered.
All Arm torque goes through axles, rather than directly from gears/sprockets to arm (bad), but at least both arms are driven = 2 axles.
Nearly direct drive arm (4 393s for max 2 Gobjs!) may be too fast to control, needs significant practice, but can surprise your opponents.
No elastic to help long 6-bar arm: suggest adding some in usual 4 bar placement, particularly if you swap arm motors down.
Since you already have chain-drive arm, you could put those heavy 393s all the way down in the base for very low CG, particularly if you increase the drive ratio.
Since arm is very fast already, you might think about swapping half the 393 on the arm with half the 269 in the drive base, particularly if you increase the drive ratio.

Post some videos of after your competition if you can;
I like the idea of claws for this game,
and your robot looks significantly different than all the slant-ramp or stacker-bots.

Remember to play the game-plan you want to play, rather than what others are doing.
You possibly have the advantage in descore and end-game with this robot.
Good Luck.

I would recommend running your chain on the drive base between the two sprockets, as this will greatly decrease the chance that your chain will slip. To avoid the chain hitting itself on the bottom, either move one of the sprockets up by 1/2" or put your idler sprocket holding the chain below the sprockets.
You should have plenty of torque to lift your arm, but some elastics as jgraber suggested would definitely make it a lot faster. I second jgraber’s suggestion to move the 393s to the drive base.

Thanks for the input!
I’ll address several of the ideas you guys have suggested.
As for the chain wrap on the drive train, the angle of the photo wasn’t optimal but before we added that idler sprocket we skipping chain links all over the place but the idler sprocket has seemed to address that problem fully seeing as though we have yet to encounter any skipping problems after adding it. I will definitely being looking at that specifically this Saturday to see if the ideas you guys suggested need to be implemented.
Next the arms, I will for sure move the motors to a lower center of gravity after this Saturday. Will have had slight tipping problems with such a high center of gravity, I forgot how hefty those motors were. The HS gears on the arm are serving a few purposes, first they were from our original design and we did not want to resort out all the spacing adjustments. They are giving us better holes to attach the arm bar itself to, more surface area on the axle, and a smoother arm movement with all the surface area touching between the tower and gear.
I actually added the elastics the day before but it didn’t retake picture of our bot after that meeting so it isn’t in the pictures. We also added a half-oval alignment bar inbetween the u in our drive train.
The axles on the sprockets of the arm actually haven’t giving up any problems with the torque being too much for them. They may be iffy after much use but we have no problem changing them out inbetween competitions if it’s necessary.
I will definitely consider rearranging the motors if after this tournament I see that we will have plenty of torque.
Finally with the driving. Luckily our design last year was a four bar with a claw so our driver has plenty of time behind this config and he has quickly learned to drive around the tipping problem. We definitely believe it’s speed will surprise our competition. While it takes them ~10 seconds to pick up and reach the correct elevation we will have scored in a couple goals, I think this design could work t our advantage in some cases.
Thank you for you input, I greatly appreciate the criticism with out the fluff, it’s exactly what I was looking for.

what is your thinking behind choosing a claw instaed of something like a vertcal outside intake? You might be able to use only two 393 motors on the lift, possibly moving the other two 393s to the intake, then put six 269s on the drive train, which will make your robot much faster.

Nice response in return, without defensiveness.
Declining major changes in the day before competition is often prudent,
but it also points out that if you actually wanted feedback that prompts changes before a competition, you’d need to provide more lead time.

One way to make an interesting “look” to your robot, while reducing tipping,
is to mount the tower in the center, and angle it back.

I wish Vex would provide a common 10’ central overhead standard video mount point that shows the whole field. It would be much easier to review game-films to check strategy. TV-style close up views are exciting (because they focus on that) but don’t show the overall ebb and flow of the game.

I remind again, post future pointers to videos of your competition, since fast claws are infrequently represented here on the forum.

You might consider using two tracition wheels on the front or back depending on driver preference. With a claw, front traction wheels are desirable to help keep the center of turn toward the calw. Also if someone bumps you while picking up objects your claw position should be more stable relative to the object.

If turn performance is sluggish with two traction wheels and 4 269 motors, then swap two 393 motors from your lift with the drive train.

I’ll see if anyone on my teams recorded video of the competition.

My team has actually made a pretty crude copy of your robot. It is able to reach just about the 30 inch goal. So it can’t reach as high as your robot.