This is a reveal for the first competing iteration of our robot. This robot, named “HAL,” was designed to quickly score the troughs, and was modified slightly before the second tournament to descore them as well. “HAL” could also play good defense by blocking, but had difficulty covering troughs with its intake.

Drive and Chassis:
We wanted to have a holonomic drive, but we didn’t want to deal with the funny chassis shape necessary for X-drive, nor did we want to use extra motors for an H-drive. So, we decided to use a Mecanum drive with 4 393s, directly connected to the wheels. We found on the forum that mecanums got caught on sacks, so we built a low-hanging chassis to prevent sacks from ever getting to the wheels. 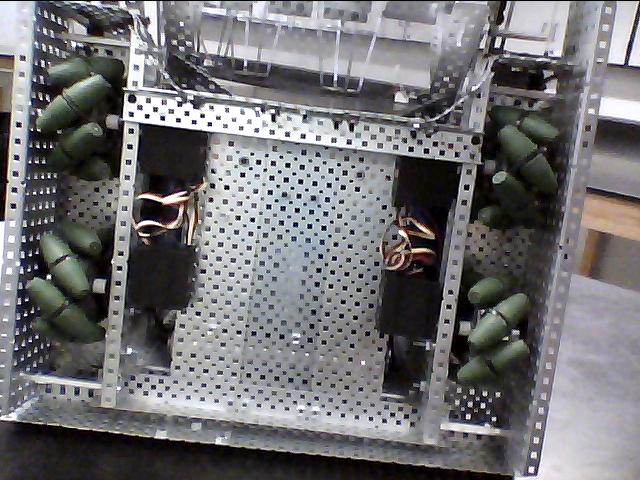 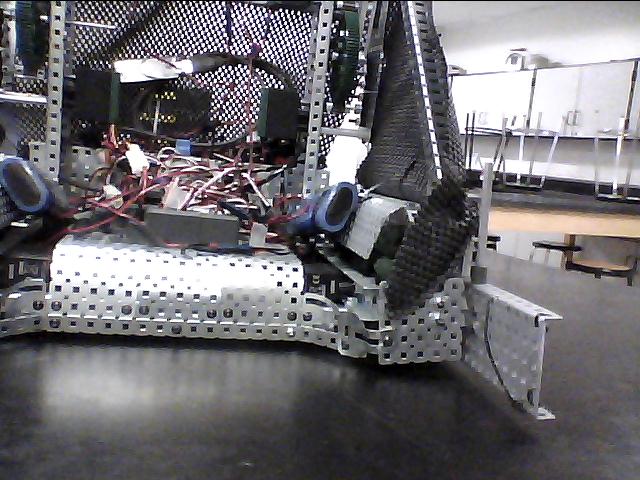 The low skirt worked pretty well, however the weight of all the extra metal made the robot sluggish and less efficient than the lighter, fast-scoring robots that we encountered.

Lift:
We started out with a simple, 15"-long four-bar, with 2 393s (high-torque), and 2 269s powering it (one of each motor per side). The motors were geared 7:1, and although this is a smaller ratio than many teams use, with 3 rubber bands per side, it is able to lift 15 sacks without significant strain. 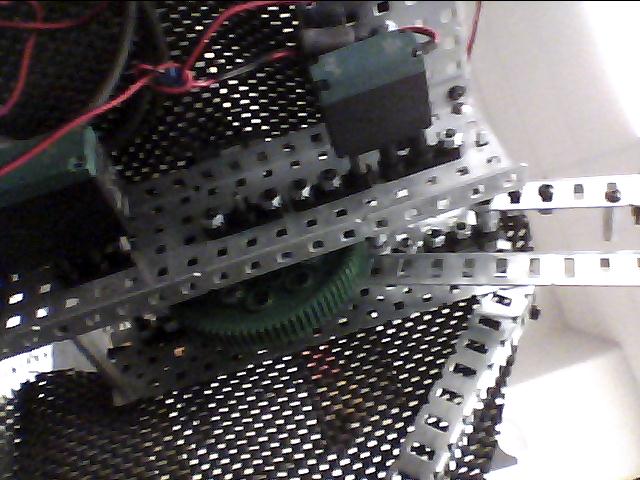 For the second tournament, we converted to a 6-bar to prevent the arm from hitting the edge of the trough while we were trying to descore. This allowed the intake to get into the trough and take sacks out more effectively. The length and max scoring height did not change.
I don’t have any good pictures of the 6-bar, so I’ll try to get some and post them later this week.

Intake:
For the first tournament, we used a “chainsaw” intake, similar to those used by 323Z’s and 24C’s original robots, but made wider to collect more sacks at once. The roller is on a pivot, held down with elastic. The intake’s max holding capacity was 10-15 sacks, but for unknown reasons, the motors would quit spinning if we tried to intake more than 5 or 6. 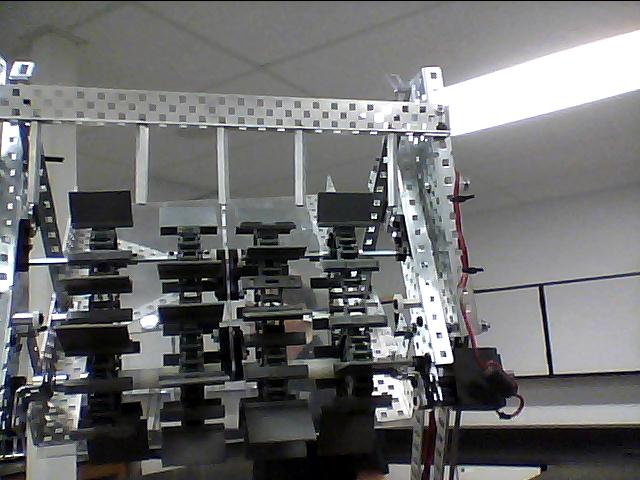 For the second tournament, we switched to a simple chain-wrapped roller, with standoffs going between the sprockets to prevent sacks from coming back out the top of the intake. This was done to reduce friction, and although the intake worked more reliably, the motors still quit at 5 or 6 sacks. We considered that they might be overheating, and we attached standoffs to the motors, with rubber bands, as aluminum heat-sinks. The motors did cool off faster because of this, but the modification was not enough to increase our capacity.

Here’s a picture of the robot at the first tournament: 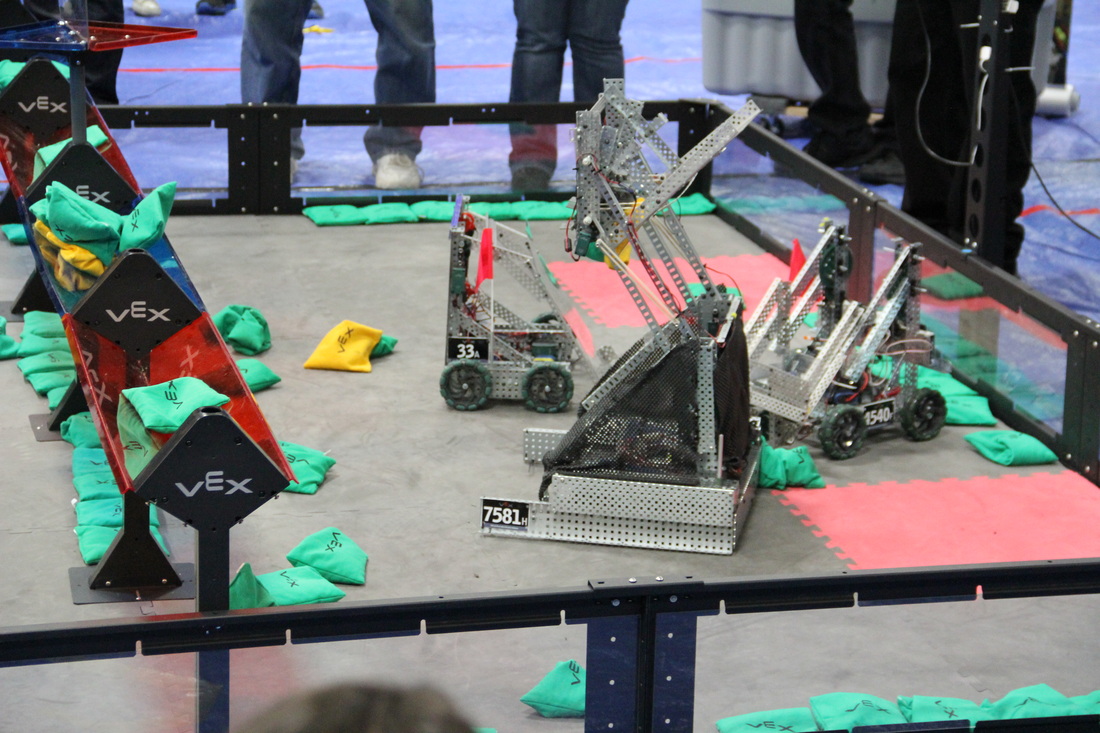 We ranked 3rd at the first tournament, and were the 3rd-seed alliance captain. After winning the Quarterfinals and Semifinals 2-0 each, we won the first match of the finals 105-14. Unfortunately, our brain died before the second match, and our alliance lost the round.

We ranked 5th at the second tournament, and were picked by the 2nd seed team. We made it into the semifinals, but we were eliminated by the 3rd alliance’s brutal defensive tactics.

Does your Drive train bow at all between the mecanums? it looks like it’s only supported by standoffs. 2425 has support on the bottom but screws drag, giving us more traction but also making us slower. Also from the videos, it doesnt look like you use your holonomic ability often. Why not?

Does your Drive train bow at all between the mecanums? it looks like it’s only supported by standoffs. 2425 has support on the bottom but screws drag, giving us more traction but also making us slower. Also from the videos, it doesnt look like you use your holonomic ability often. Why not?

In addition to the standoffs, there’s a 17.5" bar along the back that helps prevent bowing, in addition to holding the rear skirting on.

We made the robot holonomic so we could slide between troughs while descoring/rescoring, but we didn’t do a whole lot of that at the first tournament. It was occasionally useful for maneuvering around obstacles, but we noticed that strafing is slower, for some reason, than moving forward. As a result, we decided to strafe only when necessary.