I had posted a thread on this a few years ago, but it must have been lost when the site upgraded. I thought I’d share it again for any tech inspectors looking for a quicker and more precise way to measure 18" starting configurations than the typical wooden box or VEX tool.

The lasers have a lens that diffracts the beam to present a line rather than a point. Sometimes it takes a few minutes to adjust the lenses during setup… the cheap $7 lasers I’ve used can have their lenses bounce around inside the housing during transport. Once set up, they’re stable for the rest of the weekend.

We’re now on to version 3 of the sizing box, using folded sheet aluminum and 3D printed laser mounts. These are lighter and easier to tape to the wall. In addition to speeding inspection this also makes it easy to pack four sizing boxes into the tech inspection tool case, but are based on the same principle shown here. Just to balance the high tech lasers, we use a thin 18" dowel as a “go/no go” gauge for measuring height.

I’m sure some B.C. students, seeing this thread might post regarding their love/hate relationship with the lasers! 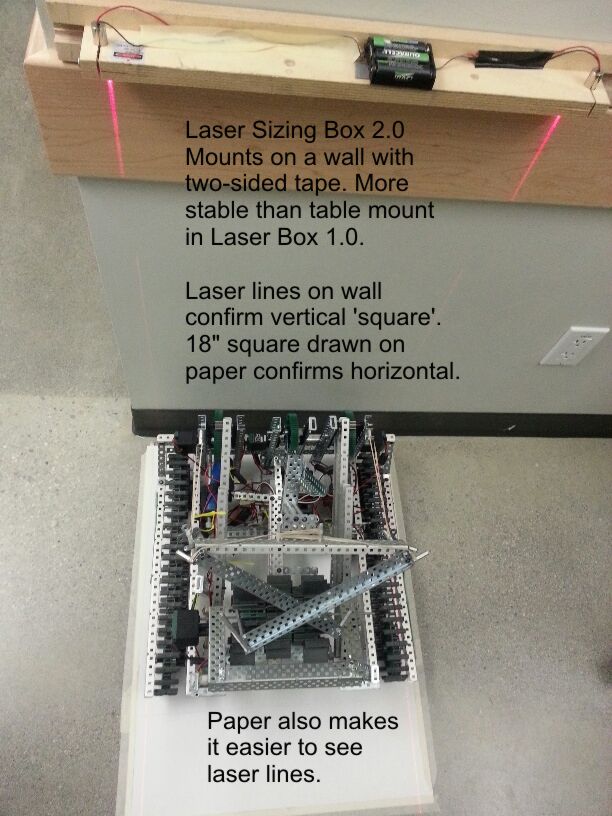 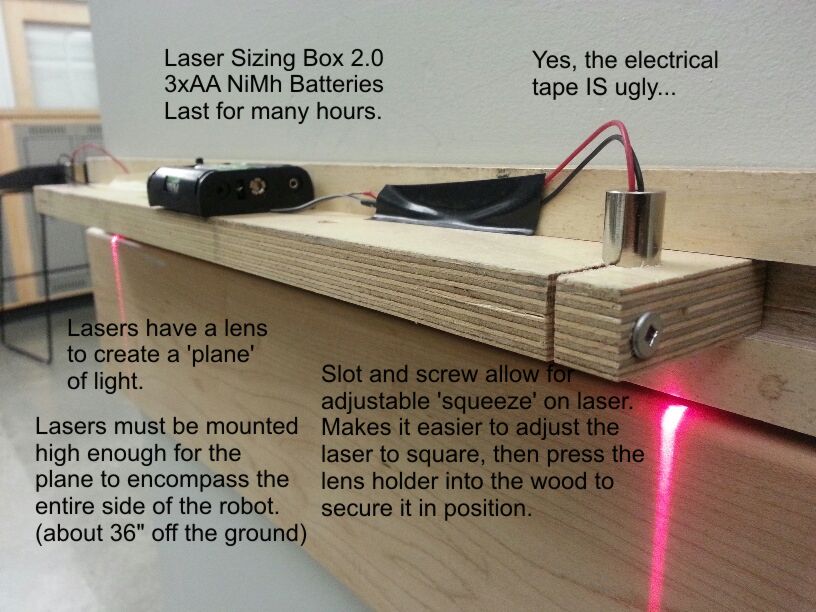 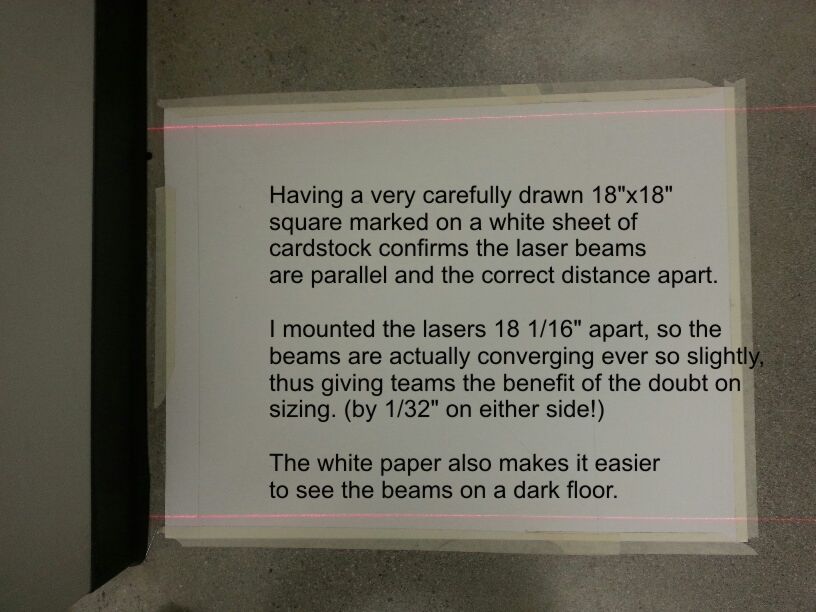 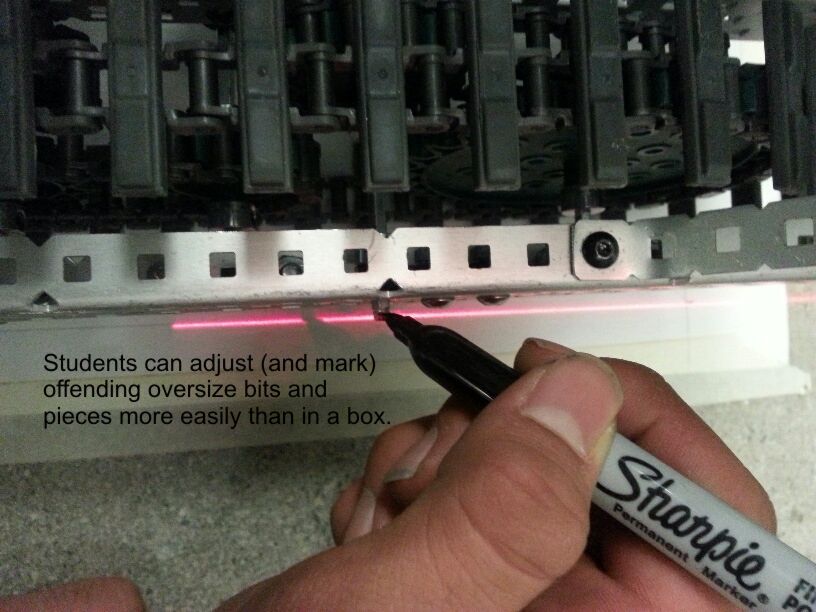 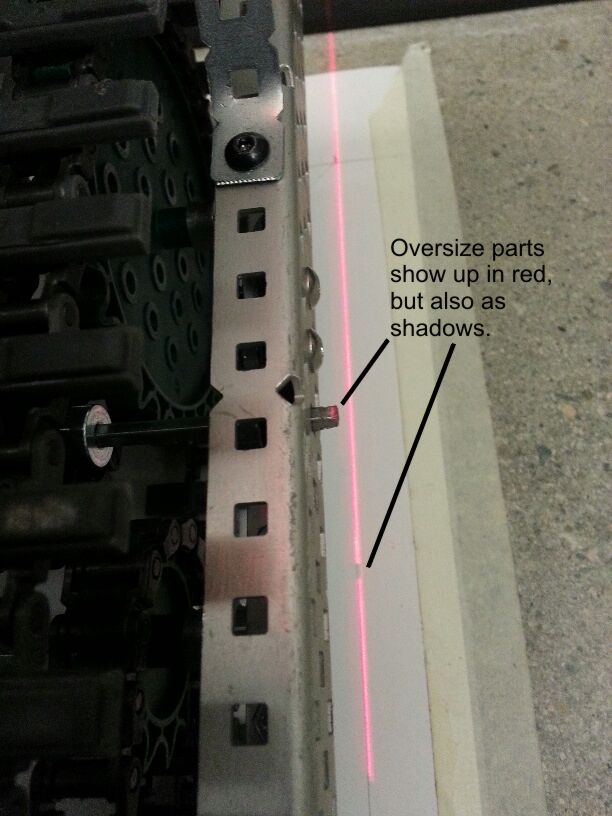 Honestly I had no idea that this method was only used here.
I personally far prefer the laser system to the sizing tool because it gives a more accurate sizing box that shows exactly what parts are outside of 18" and how you can fix it, using lasers

Also I’ve found that the metal tool easily bends in or out and won’t catch some over-sized robots if they’re under 18" along any given slice of the robot.

Just one word for this:

Version 4 will have high powered lasers that will automatically cut the robot down to size. This should save a great deal of time, albeit at some risk of damage to gymnasium floors.

Thanks for the kind words!

Version 4 will have high powered lasers that will automatically cut the robot down to size. This should save a great deal of time, albeit at some risk of damage to gymnasium floors.

Thanks for the kind words!

One question though: where did you get the lenses that diffract the light into a line?

I got my lasers at my local electronics shop. https://leeselectronic.com/en/product/56021.html?search_query=laser&results=25

If you don’t have a place quite so awesome as Lee’s Electronics in your immediate vicinity, I’ve seen similar lasers on Amazon. (EBay, AliExpress and others will likely work, too.)

This is awesome, we had a metal shop near us make a perfectly 18" cube out of metal, meaning its both a carrying case, and a perfect sizing tool

I wish every team had one of those! I highly recommend them for team use. They aren’t so great for performing tech inspections, though.

The advantage of the lasers is that they do not allow the robot to rest against the edge of the box… we used to use very carefully sized boxes for tech inspection, but there was always difficulty in determining whether wires or arms were being supported by the sides of the box, and if so, then by how much. It was also very difficult for students to reach inside the box to make adjustments to their robot, or to mark exactly how “oversize” it was. Lowering the robot into the box was also not an accurate simulation of how the students would place their robot onto the playing field… some mechanisms would be adjusted by having to lower the robot into the box and holding onto an upper member or arm, rather than having two hands on the chassis.

It was also difficult to arrive at a tournament and have three or four “perfect” sizing boxes… tech inspectors don’t want to carry boxes from event to event, and when borrowing boxes from teams there is always a question of how exact the boxes are, both in size and squareness. Believe me… everyone wants to double check a physical box that says they are 1/16" oversize, but the lasers just make it plainly visible.

But good on ya for getting a good box… I’ll bet you’ll never break a laser beam!