Tell me about your first, second and third grade teams

Our youngest kids are 3rd grade. They need a parent/coach pretty much the whole time. I can’t even imagine doing IQ any younger, unless the kid is really mature.

The first year we did VEX IQ, I had a third grader and a fifth grader. We started the team with just them. As the year went on, it became apparent that we would do better with another team. I had a son in first grade. I was able to pair him with some local kids, and they were able to build a robot to play bank shot. It wasn’t great, but it worked. They qualified for state, and won the STEM award at state. The next year, he was on a team with only second grade boys. They were a fun team. They didn’t progress much from the original vex build for the game, but, they were able to program in Modkit enough to turn, drive forward ,and knock the crossover balls off the fence, then reset, drive forward, run, and park on the ramp. This was enough, with their driver skills score, to again qualify them for State. That same year, I had a kindergartner. She wanted to play. We paired her with some other siblings of roboteers, and called them the baby bots. They were adorable! They build a simple drivebase, from instructions, and never finished their tower. They put a plate with standoffs to push the balls off of the fence. They also had a one-bar ‘stinger’ that could put the ramp down if it was up. They actually made finals at State. The next year, my now first-grader competed with my now third-grader. They build a bot based off of a more experienced teams robot that could pick the rings off the wall and score them. They actually competed at Worlds. This year, I had another kindergartner. We tried to put her on a team, but she didn’t have the attention to stick with anything, so we decided that she couldn’t compete after Summer camp. So, it’s not right for every child, but it is right for some. Now, we did have to support these students more than our more experienced teams. But, they did design , build, and program their robots. Their engineering notebook definitely didn’t win any awards, but they did write in their best handwriting, and drew lots of pictures. My first-grader, that competed in Bankshot is going into fifth grade next year. I consider him an EXCELLENT roboteer. I attribute this success to his training and experience starting when he was in first grade. 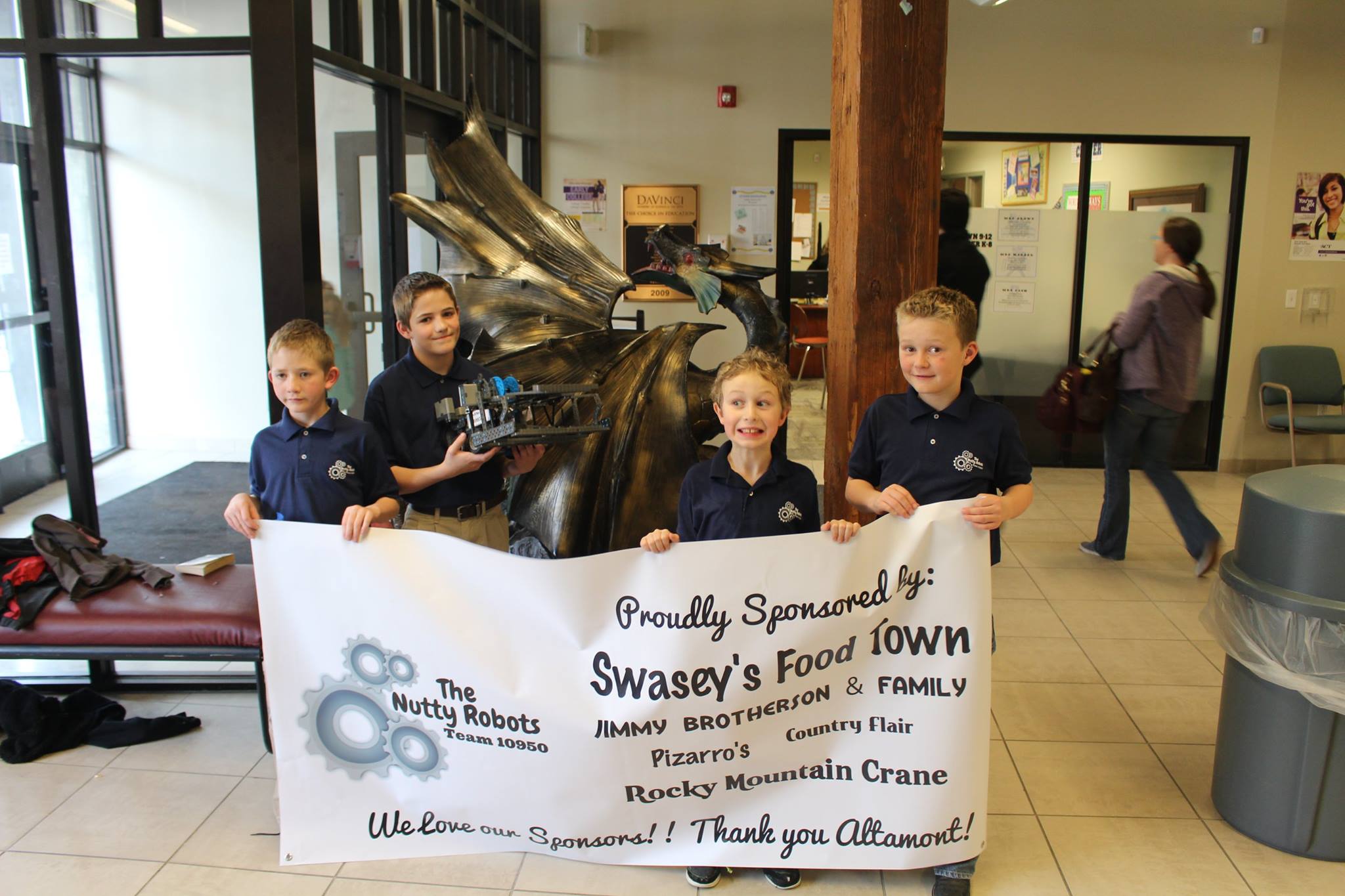 This is our first year, the boy cheesing it is in first grade, they just qualified for State in this picture. 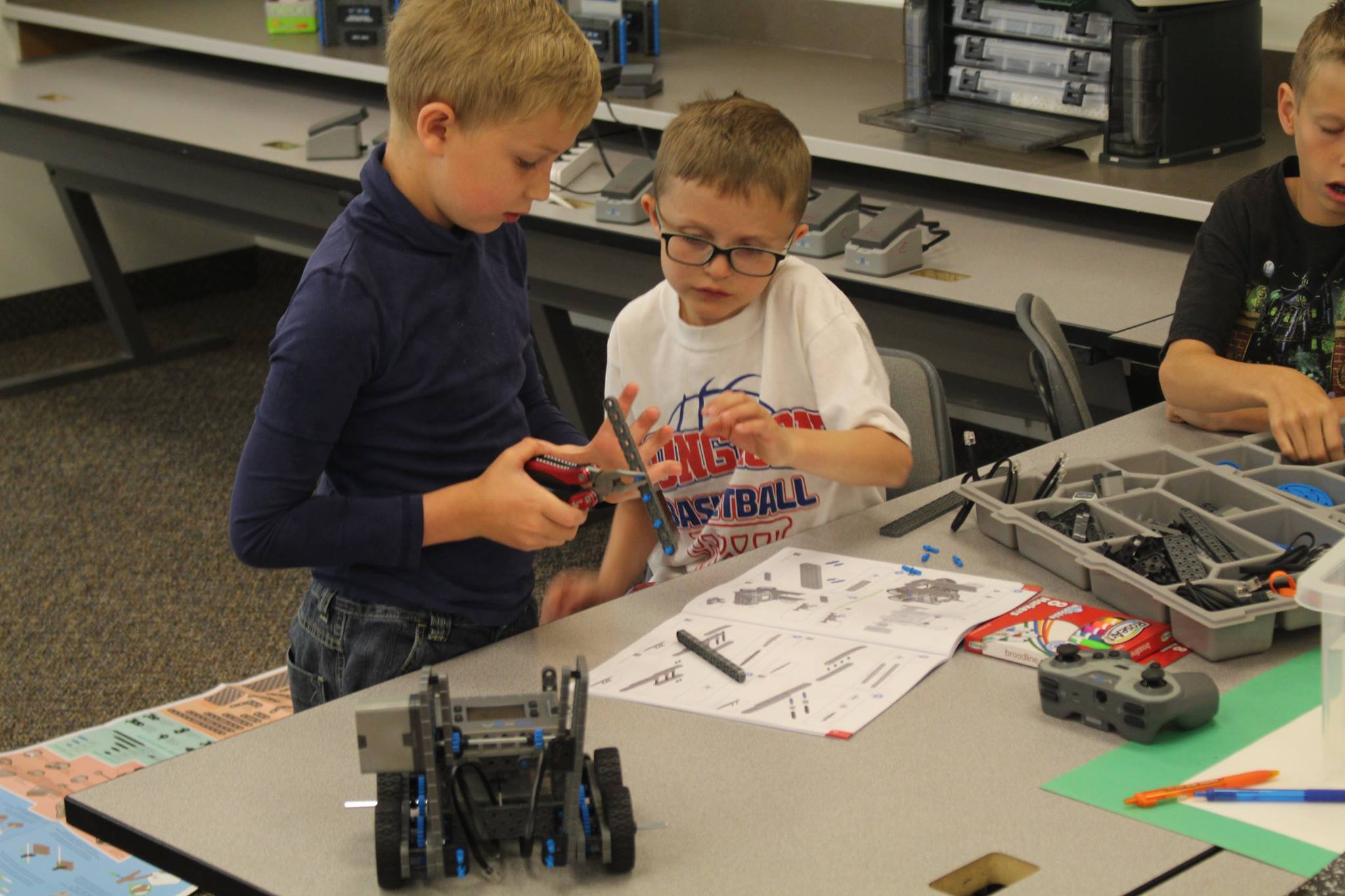 Here they are in second grade, working on their robot. 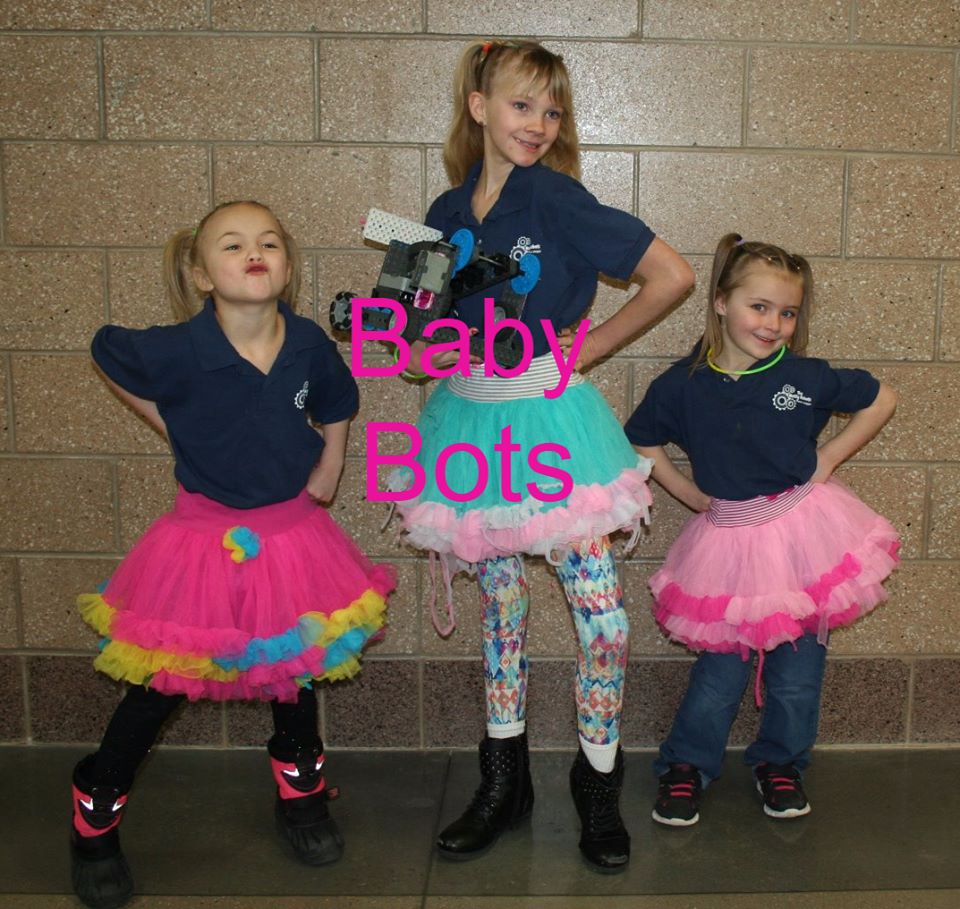 Here’s the picture we took for the Baby Bots Engineering notebook. 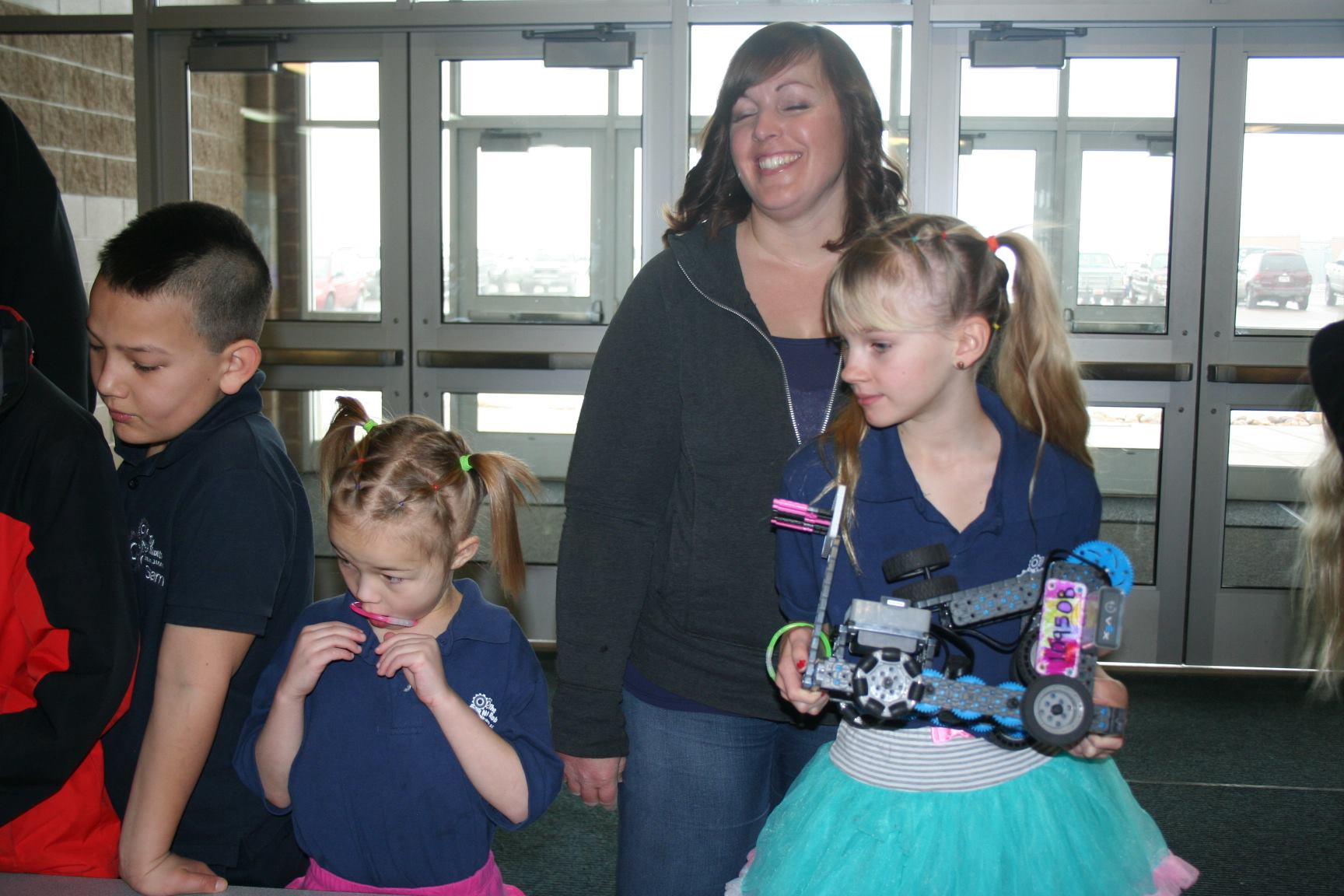 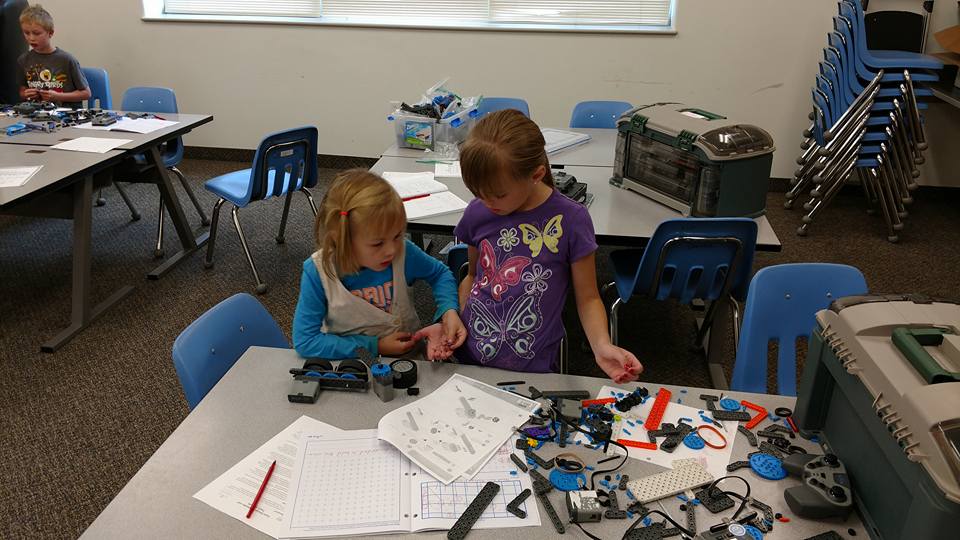 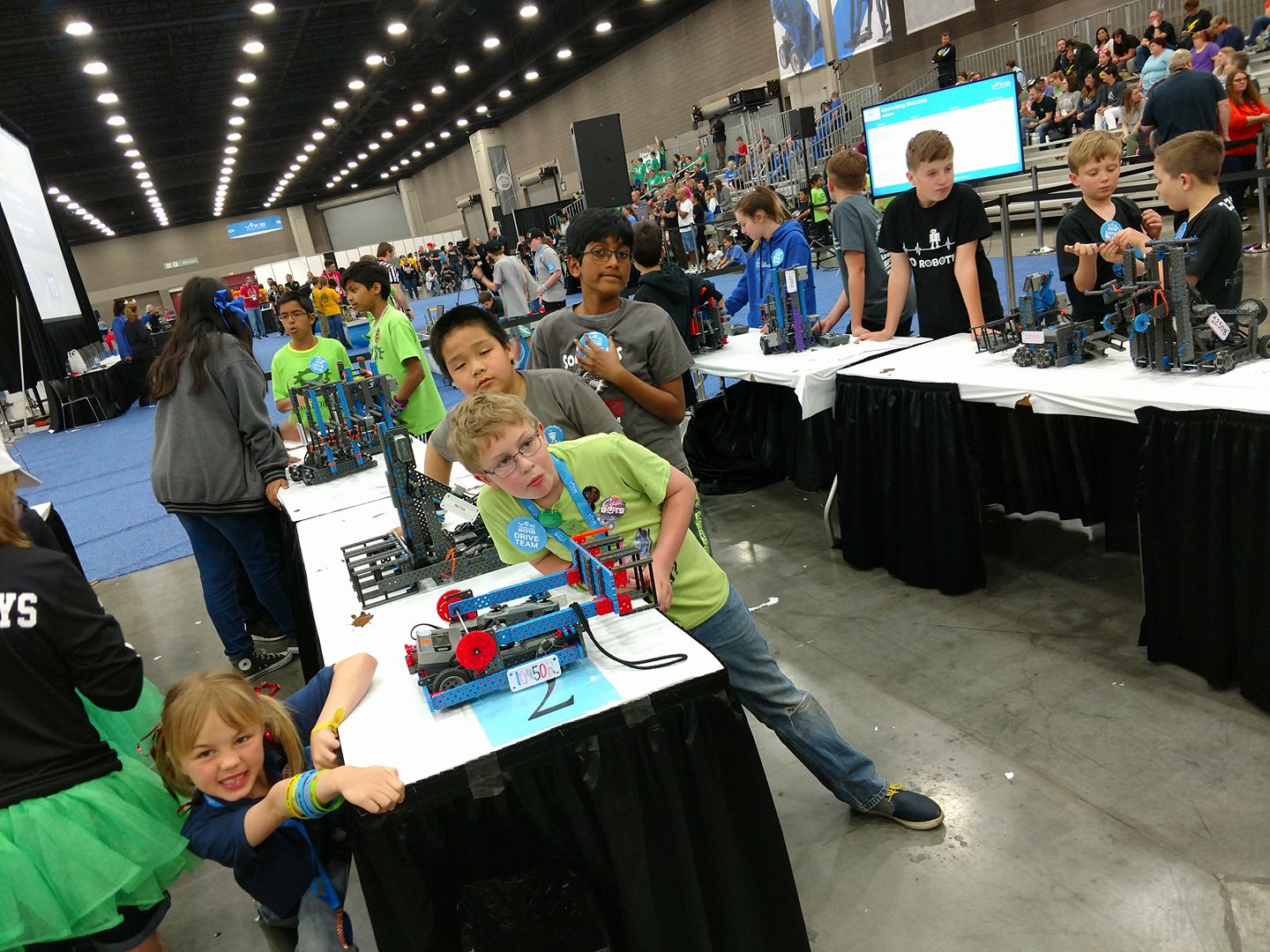 Here’s my then first-grader and third-grader competing at Worlds.

Sorry for the picture overload. I love my little teams!

Typically we let them start at 4th grade but recently gave a few 3rd graders a shot. We put the 3rd graders together on the same team. The team did OK with the basic robot builds using the instructions and were able to make improvements to the robot and managed to be competitive. They struggled with programming and probably leveraged the built-in driver control for much of the season. Also even a bigger challenge for them was some sort of an engineering notebook, it was more of a journal. They did return the following year and were way ahead of the first year 4th and 5th graders, so the experience did make a difference. Not sure I would try to encourage younger than 3rd grade and I would be selective on the younger grades. The maturity levels really vary a great deal and even some of the “older” kids can meltdown when things are going well. I did think it also worked out to have the kids that were about the same level on the same team in that instance but we also have had good success with mixing experience levels. All that said, If you have a kid that is ready to do robotics it really doesn’t matter what their age is, let them build and build.

For kindergarten through 2nd grade we have an after school program. These are not competitive teams and they do not build their own robot. Just kids having fun building stuff together in small groups. They get a chance to drive a pre-assembled robot too. The book choice for story time will have something to do with the design process. In these age groups the kids are not able to stay focused long enough to complete a long term task. The goal is to introduce them, make them feel comfortable and build confidence.

Beginning in 3rd grade kids can join a team. A lot of adult supervision is needed to keep a team of 3rd graders on task. In doing so you run the risk of being less student centered. At this age it can be counterproductive to have a long robotics season where they advance to States or Worlds and there is more pressure to succeed. To be successful teams need to practice, and then practice becomes a chore. This past year we started by telling 3rd grade teams that their season would end in December. Ideally, I would like to have a league for just 3rd grade teams where no teams advance past the league finals. The kids love competitions, but you don’t want something that drags on forever.

I’m assuming these teams weren’t part of a school team. When we have a group of children from school I think the dynamics are significantly different.

In my summer camp I will take 3rd graders but with 20 kids in the room with 10 different robots it’s a bit of overload. For a camp it’s actually cool, but for competitive teams I’m not sure they would get much done.

I could not imagine any younger than that in a larger group environment.

These are not a school team, but that doesn’t have anything to do with it. The school wouldn’t fund robotics, because it was too expensive and didn’t affect enough students. So, we did it ourselves. But, we still ran off of a typical school team schedule. You will notice that the pictures of them building the robot are in a school classroom. That’s where we typically met. The younger teams typically met once a week for for an hour and a half, while my upper grade teams met up to four times a week. So, they were in a classroom with 20 kids, and the older kids were expected to help the youngers when necessary. But, only with assistance like pulling a part apart or troubleshooting a program. Most of the time there was only one adult, maybe two, in the room, so helping each other was a crucial part of the program.

Got it. In your above post you only seemed like you were talking about your personal kids, but I do that with my students as well.

The younger teams typically met once a week for for an hour and a half, while my upper grade teams met up to four times a week.

What do you mean by younger and upper grade? It seems like the vibe of the team would dictate this pretty well. Glad that the volunteers are flexible enough.

How do you select the younger kids? There are all sorts of applications floating around Facebook these days. Or is it just who wants to come?

The kids I talked about in my post are all my own children. But, their teammates were from the school. Our community is Really small, about 200 people. If anyone wanted to do robotics, they did it. We never turned anyone away. We are also two-three hours away from any urban areas. So, traveling to compete was difficult, and it was totally on the parents.

This year, my youngest team (all second grade girls) met once a week. My next youngest team ( all fourth grade boys) met twice a week. The next team (fifth and sixth grade) also met twice a week, but one of their practices was a double practice(it’s what worked for their schedule). My last team (all eighth-graders) met three-four times a week, depending on schedules. I also ran a high school VRC team. They were invited everyday, and they came as their schedules permitted. Normally, I would see at least one of them everyday.

Thanks for all the great responses.

I’ve done a team of all third graders and without the cadre of parents I would have never made it. Last season was a mix of third and fourth graders and I could really see how much they matured over the summer months. This coming season will be third, fourth and fifth.

We meet once a week for an hour. It’s a long season from October to March, but if the team had 4 weeks between events we skipped two weeks. In the first year with all third graders it was a slog getting stuff built. Last year the returning roboteers helped out with the new ones.

We also used pliers to help the tiny fingers get parts apart.

We give returning roboteers first crack and then it’s received permission slip order.

Love the idea of letting K-2 just build stuff. I have a grand child and we build the kits together. They point to the parts and decide if they can do the assembly. If not I do it. The space series has been a favorite. @jrp62 you said for story time you had design books. Can you share some titles?

Thanks again for all the great posts and I love the pictures!

My wife created the whole program for the younger kids, I’m just there helping out. She put a lot of thought and effort into it. Here are some of the story books that I know are on her list:

We just started a team with 2nd & 3rd graders. They’re doing well but they’ve been watching their brothers for 3 years. I expect we will need to take the summer break off but they’re really excited and building some interesting stuff!