Presenting the latest broken strategy that seems to be completely legal. Tether Wheel strategy, as the name implies, uses wheels on tethers to block goals. This goal is the optimal strategy for red… 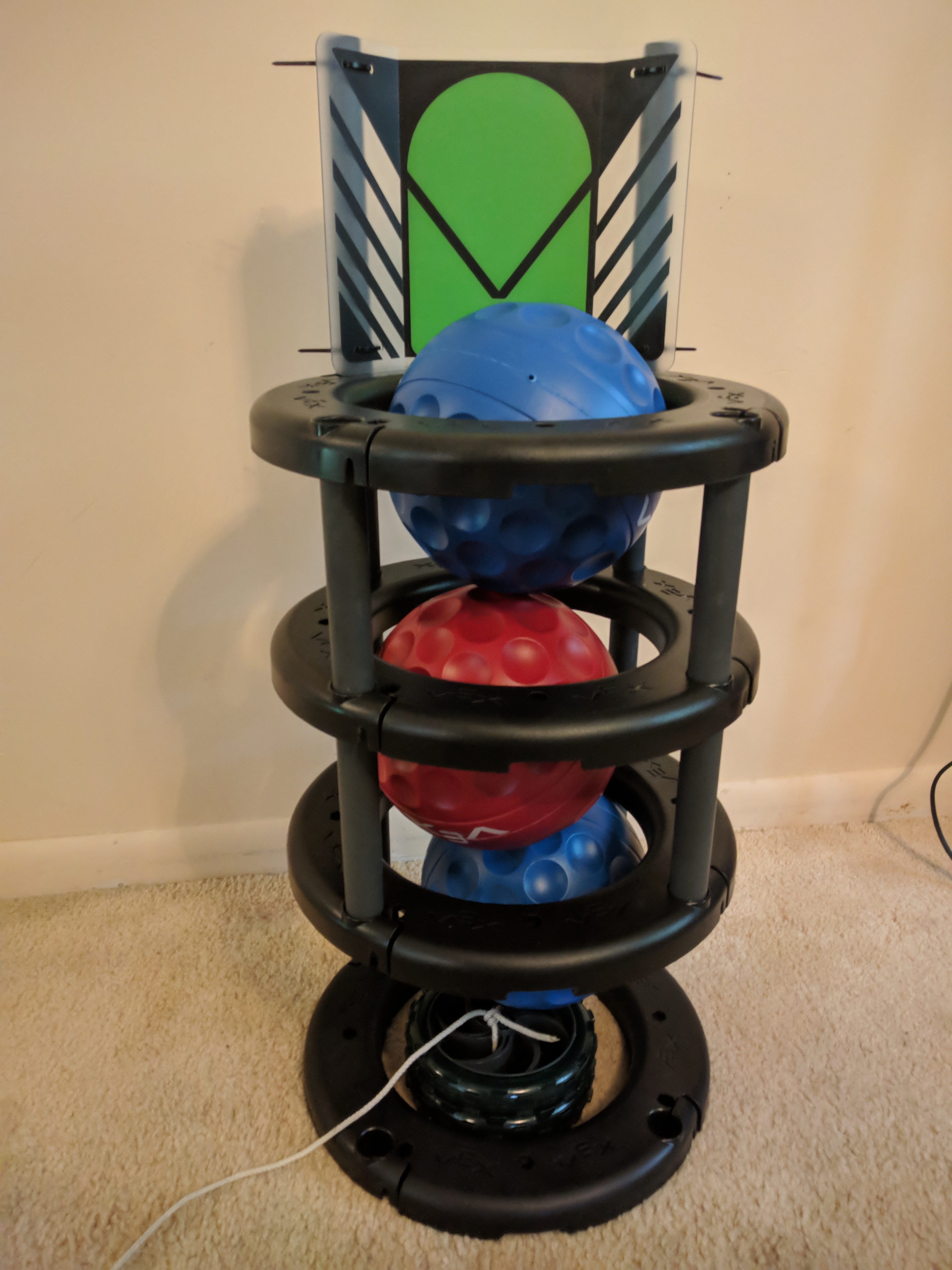 Here red has placed a tether wheel on the bottom, then scored a blue ball, a red ball, and another blue ball. Due to the wheels it is impossible to descore anything. Then since the top blue ball is definitely above the top ring the goal is owned by the red alliance. The bottom ball is blue because if it was red, since it is a touching a red robot, it wouldn’t count, instead we use that spot to store another blue ball, and not let the blue alliance use it.

So, red owns the goal, it is impossible to descore, and it is hoarding two blue balls with out going to red’s total of 3 per robot. And the rules seem to have nothing against this.

What are everyone’s thoughts on this? Viable strategy? Will be addressed in a manual update?

Also here’s a poll, because I know everyone likes that…

But that would open up more risks for you like getting tangled.

People have been making tether bots/wall for a long time, there are plenty of ways to minimize tangling (mostly keeping the string low to the ground), and isn’t really a major problem.

But if there was a robot that could easy push it in the back corner then this would be useless.

But if there was a robot that could easy push it in the back corner then this would be useless.

Those wheels aren’t easy to push. Also what do you mean back corner? If you mean to the back of the goal (still on the floor), that wouldn’t help, you still wouldn’t be able to remove balls.

I think I much prefer this idea to the ball locking thing recently discovered. For this strategy you actually have to design your robot to carry and deploy tether wheels. This is much better than just ramming a ball into the corner potentially damaging the field. Also this should work on every goal, which is an advantage. Well done

Not the wheel but instead of doing this you would exploit the corner problem I am sorry if you misunderstood.

We already know that the corner locking strategy will get fixed in the manual update, so we can’t use that anymore.

PS: Could it be possible to descore tether wheels with normal intakes? Can you design them to be harder to intake or remove? 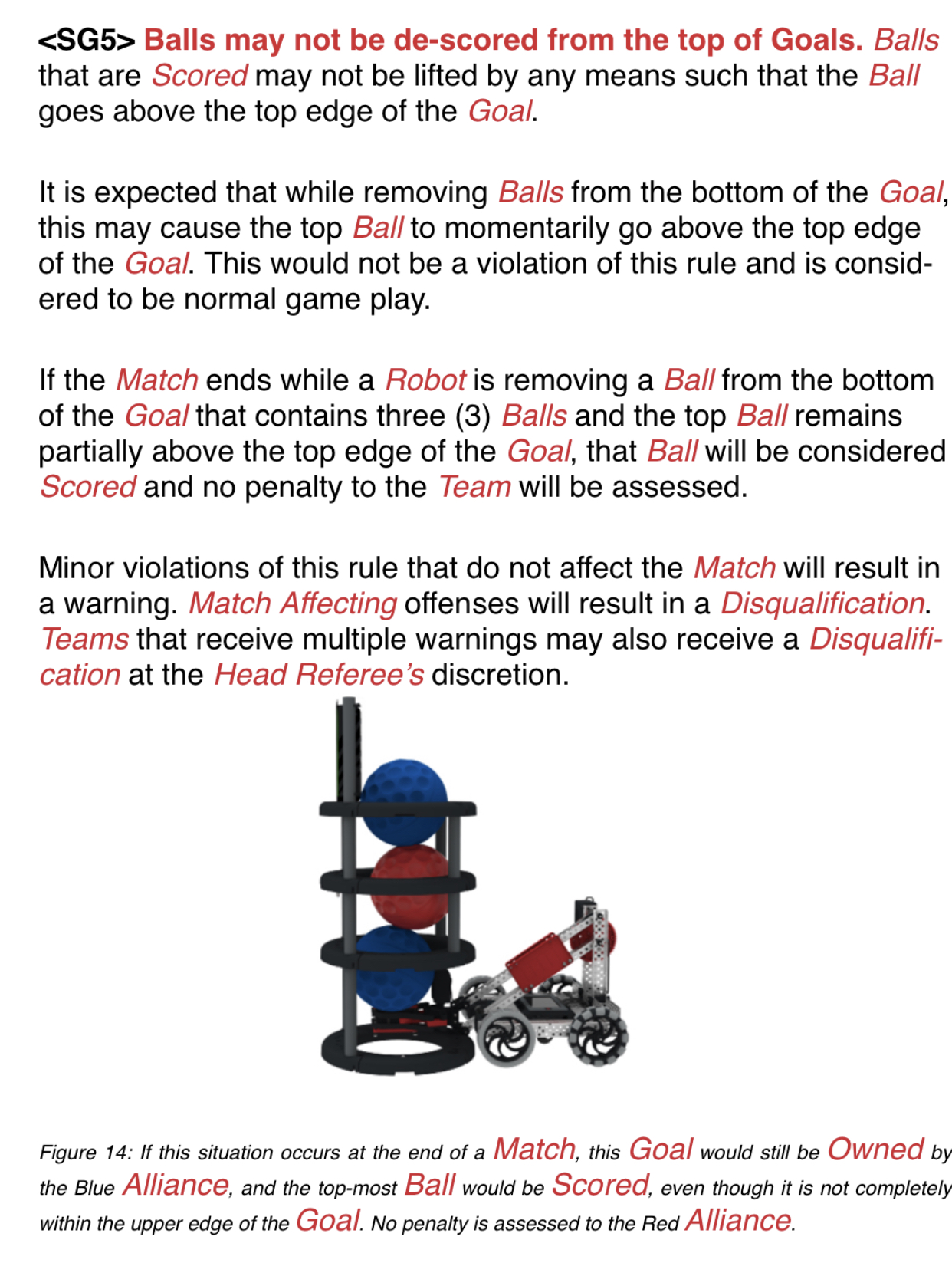 No way the GDC lets this fly. This is way to broken and the GDC will definetly outlaw.

Your not descoring anything with this. You put a ball on top, but it never counts as scored.

I mean, I think you would first place in the tether wheel, then the first two “scored” balls, and then hide one more ball on top. I guess you’re right that it might not be legal if you try to shove the wheel underneath three already scored balls.

This strategy seems somewhat sketchy to me. I like it, but it seems fairly easy to counter. If you have 1st year teams using your standard V5 clawbot, with the height of the two wheels, I feel like it would be too easy to remove them. Also, how do you intend to deploy them? In my mind, tangling is also a major issue.

I didn’t think about that. I guess this is a question for the Q&A.

No way the GDC lets this fly. This is way to broken and the GDC will definetly outlaw.

The real question is how would they make this illegal without distributing other things, like actual descoring. You need to put mechanism into the goal to intake balls, which might be hard to rigorously differentiate against something like this.

They may say you are possessing those blue balls.

Another interpretation of this makes me curious. At the bottom of the image in @MixieQueue ‘s post, it clarifies an interesting rule. It specifically states, in a situation like this, (the picture shows a claw bot claw doing the exact same thing as the OP’s idea; essentially the same situation) no penalty is assessed to the red alliance. So it’s still legal, BUT, in a case like this, it also says that the blue alliance would own the goal. Hear me out, that rule is clarifying this as if the red robot was trying to descore the bottom blue ball at the very end of the match, and clearly the tether wheel isn’t actively trying to descore anything. this is why it is a very questionable rule in this situation.

Also, for @9MotorGang ‘s comment, if this rule I stated applies, then you cannot be possessing either ball since they are both scored. 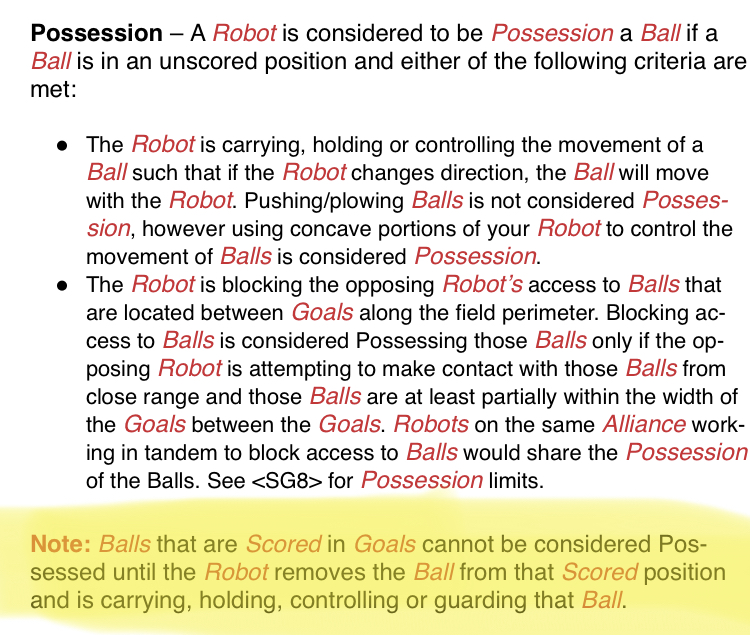 Edit: this is still a good idea; you just won’t be able to hoard the very top blue ball without it owning the goal.

So I think the Note would imply that red is possessing the top blue ball because the other 2 are scored. Theoretically, a robot could still clog 3 goals if 1 is considered in possession.

If you don’t put a blue ball on top, and just have 2 balls in the goal, then you could theoretically clog all the goals.
Edit: I just realized, if the blue ball was on top, would it even be counted as possessed by the red alliance?

Guarding would be the key word here.