You can have a release mechanism that pull the wheels out final second, it might be easier to just put in 2 balls though

Your not guarding the ball though. It is just sitting on top of a goal and any robot that has a mechanism to remove a ball from the top could do so easily (problem is no one will have such a mechanism).

That’s the thing, I wonder if there will have to be a clarification on guarding. (I think you are right)

I think you are possessing the top ball because it is not scored and if you remove the wheel, it would be scored. From that I feel like the red robot is possessing it.

The blue ball would still be accessible, because teams could push it up from under. Because the ball was never scored, you would also not be descoring it from the top, so you would be allowed to push it out legally.

Here’s the thing though, according to this rule, 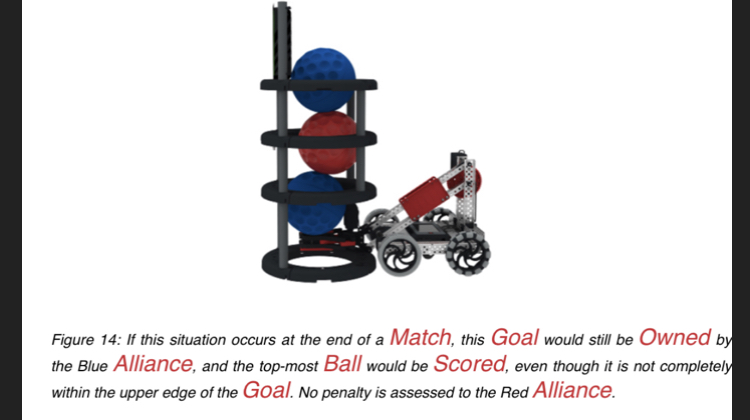 It appears as if the blue ball (if it was on top just like the OP’s photo and the figure above) might be considered scored. And therefore would own the goal. Then you would definitely not want to try to hoard the top blue ball.

…Are we reading the same SG5? Although nothing is being “descored”, as the simplified red text says, the rule says

This technically means the scenario presented in the first post must lift a ball that is Scored, and that becomes a violation of that SG5, and if this happens at a beginning of a match, that is probably going to be a Match Affecting instance to try to horde two balls.

EDIT: I’m keeping the part above, since it should still be kept in mind if one undergoes this strategy, but that isn’t necessarily implied, unless the rules change so the third ball counting as “Scored” while a robot is touching the bottom is applied immediately, instead of after the Match ends.

I’ll concede that if you find some way around entanglement, you could use it to horde one of your opponent’s balls, by having your ball in the middle and an opponent’s ball on the bottom, which is probably game-breaking enough to just put a wheel in the center tower, and just have both robots of the same alliance protect one pair of corners to get that fabled diagonal row “opponents can’t score any rows” win.

I mean, there was nothing stopping “cap-bots” that protected the top of several of the towers in TT, so I’d assume this should be treated the same way.

You can always just have a blue ball and two red balls, the important thing is that you are locking the goal.

Why are we arguing over something that they are most likely going to ban?

Why are we arguing over something that they are most likely going to ban?

But what if they don’t ban it. For example things such as wall bot are considered legal.

But this is different

Ngl I could see this being legal

I don’t really think the GDC will try to remove this. The corner ball locking did a very similar thing, but it abused field tolerances and a whole bunch of other janky stuff. This strategy seems like a much more intended way to play the game. The GDC knows about wall bots and other weird defensive robots, I don’t think they failed to predict something like this or 81k’s cage. I feel like it does mildly break the game, but we’ll have to see.

First of all, we’re not really arguing, just investigating the legality of this idea, and second, the GDC will likely not ban something just because some people do not like the idea. If it is not within the rules, there might be a further clarification that makes this strategy illegal, but if it is legal they will not just add a rule to make this specific instance illegal.

The difference between this and ball locking is that this isn’t reliant on inconsistencies in the field. You could do this at any event. My hopes aren’t high for this being legal but all I’m saying is that it could potentially be legal

What rule does blocking a goal from being descored violate? Anyone? I think this is currently perfectly legal; there are just some specific flaws that need to be accounted for, such as trying to hoard a top blue ball.