The replacement of Round Robin at 2020 Vex Worlds

This is why teams consider round robin “making the dome” as well as an enormous achievement.

Or making Center Stage. It’s the best of the best!

The pressure must be immense with the crowd noise and the lights and everything else!

The division level matches are all played in a large, open area in the Kentucky Convention Center while all the matches in the round robin and higher are played in an enormous auditorium (That holds 3k people). This is why teams consider round robin “making the dome” as well as an enormous achievement.

Freedom hall has a capacity close to 19000, although in the configuration used for worlds it’s probably 1/2 to 2/3s of that. So more like 10000 people watch finals.

on my; thats really cool, but complicated at the same time.

That’s a mind boggling number. I can’t believe how much vex has grown in such a short time

Speaking as a competitor and spectator the round robin has been a drag and not fun to watch at all to me since it’s been introduced. Most years my teams have skipped it and come back to Freedom Hall once the actual finals start:

Heck last year, a number of them took the bus back to the hotel.

A round-robin with 8 teams would take too long. A double-elimination BO1 bracket, however, would be 14-15 matches (15 assuming the loser forces a reset), which would be the perfect amount of time for Freedom Hall. Here is an mspaint sketch of what a double-elimination match would look like (assuming the higher seed always wins). 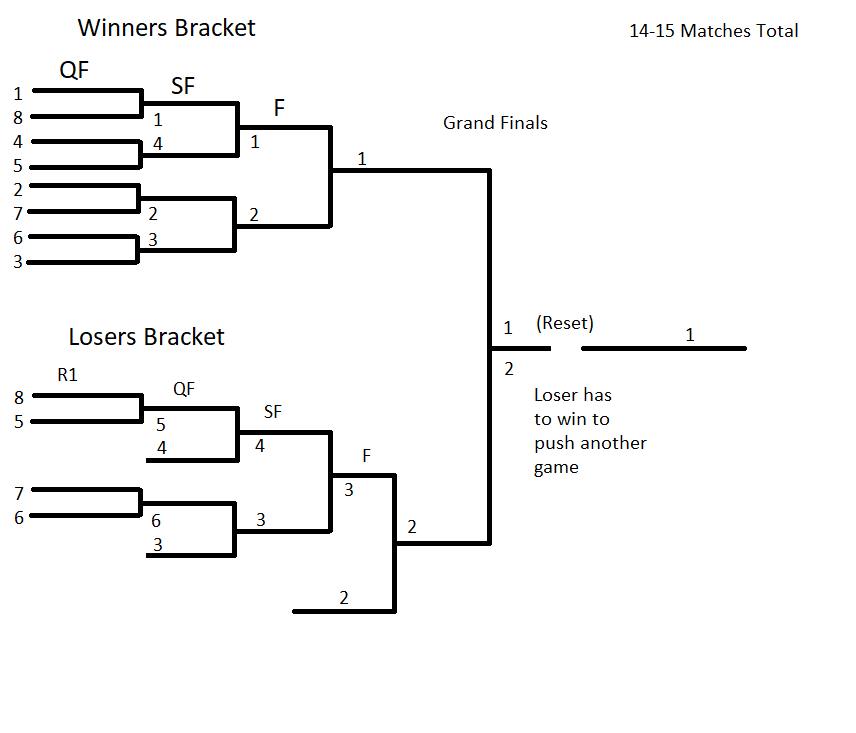 That concept would work well, I think. BO1 single elimination is not a good fit for VEX worlds finals.

Just sayin encase some people haven’t realized, vex often does ms, hs, and u all at the same time so takes a bit longer

I liked the round robin, since each alliance plays each other alliance. You can trim the time down by adding an extra field and play a little faster.

All things are possible, given time, money and effort.

They do the Finals at the same time, but in the past, they did the Round Robin before the MS and VEX U matches.

If you really are concerned, they could just do Losers Finals of Vex MS, Vex U Match 1 (I don’t think they get two more divisions this year, so it’s just going to be BO3 from there), Losers Finals of Vex HS, Grand Finals of MS, VEX U Match 2, and Grand Finals of HS, then any necessary third matches or Grander Finals from there. Then, there are only 12 matches for HS and 4 matches for MS beforehand, which means 16 matches, which is only one more than the RR last year.

An 8 alliance round robin is 8 choose 2 = 28 combinations (28 matches).
A 6 alliance round robin is 6 choose 2 = 15 combinations. That’s double the matches. “An extra field” and a “little faster” play won’t be 2x the speed. And if it was, that’s way too many matches to make the entire audience sit through. A lot of us even fell asleep with the base 15 when coupled with VEX’s ceremonies and skills.

Another idea (thanks to Nolan from 1970K) is that instead of finals being a BO3 when winner leads 1-0, it could be a BO5 with the winner leading 1-0. This prevents the scenario that world finals is only 1 match. If it is BO5, then the alliance from the winners bracket needs 2 games to win while the alliance from losers bracket needs 3 games to win. This allows a minimum of 2 matches and a maximum of 4 instead of a minimum of 1 and a maximum of 2.

The pressure must be immense with the crowd noise and the lights and everything else!

Actually I want my teams to experience and go through this… pressure (and limelight that come with it of course).
it requires another level of composure and focus when playing in front of a 10k crowd.

Speaking as a competitor and spectator the round robin has been a drag and not fun to watch at all to me since it’s been introduced.

I agree… especially when it was during the Bo3 era.
But I must say that Bo1 does improve spectators’ experience.

wait why does loser bracket have to push 1 win. Couldn’t we just have it be a normal bo3?

That’s not how Double Elimination works. The top bracket team in finals still has 2 losses to go before they’re out. If they lose GF-1, then the next match will kick someone out of the bracket.

I would prefer the division champions to be given the honour and experience the walking down from the stage to the playing fields in Freedom Hall.
I think they deserve it.

But to have 8 teams round robin is gonna be just too draggy.

check the solution i posted from owen. It’s a really good suggestion, and could be done in freedom hall

You are all forgetting that there’s more than just VRC High School at Worlds.