The robot doesn't work during the official competition

We have a robot with 10 motors 393 and 2 batterries (using power expander). We use one battery for 6 motors, and the other one for the other 4. The 4 wheel’s motors are connected at the first battery (connected at the cortex), and when we use our robot in the official competition they stop working (all the other motors work correctly). During the first matches they work around 1 minute, but then they only work around 10 seconds.
We always try our robot first at our school and it works perfectly. Another important aspect is that after connecting the controller to the Competition Switch, when we disconnect it, the robot starts to work badly. We have changed all the motors and batteries, and we tried to change the controller too, but it didn’t work anything because it seems that it didn’t sincronizate correctlty.

I don’t know if this is your problem, but after a match try taking your vex net key out of your cortex, shut your power off on the cortex, and then plug your vex net key back in. We have had technical issues where our robot doesn’t perform very well after a match, but we solved it by taking the above action.

Without adding more detail, I find it hard to help you troubleshoot. I would suggest looking over this flowchart, as it may shine some light on your problem.

It seems that in depends on the day. Yesterday we tried and after 10 minutes they stop working. Today we have tried more time, and they haven’t stopped.
All the batteries and motors are new. 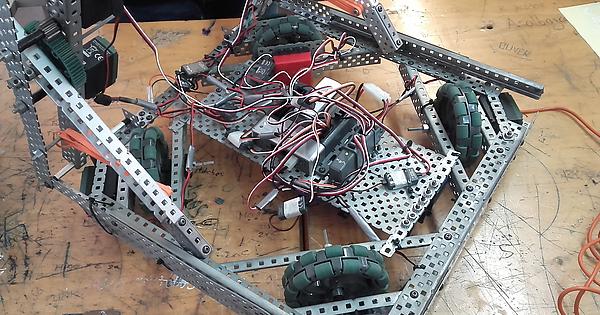 Maybe you’re stalling out? Try splitting the load of the motors, ie have 2 base motors and 3 other motors on the cortex and 2 base motors and 3 other motors on the power expander. I would also recommend testing with the 9V both plugged in and not. Also, what do you notice when the motors stop working? Do they make a whiny sound, or do they do absolutely nothing? Your robot looks to be made primarily of steel from the photo you included, so the weight might be an issue as well.

Does this happen when you are using the competition controller on the playing field? It could be a short in the controller. We are having the same issue with one of our bots. Plug it in for game play and it goes haywire. On wireless no issues at all…

Again it is hard to know, without more detail.