“Dave_Flowerday: As a side note, I really don’t understand how any IT department in 2018 can operate on a “deny all by default” policy. How does that even work? So many things need network access these days it seems like it wouldn’t be possible to keep up with all the exceptions they’d need to add.”

Fast forward to now. Will attempt to run an event in a school gym. Asked for network access and/or guest WiFi answer was no. Will bring an old 5GHz WiFi router and create a closed network for TM, as it is customary. Have a work laptop with a sim card that can connect to the internet via LTE. Reception in the gym is abysmal (one bar or so, in and out). Is bridging the cellular network with the wired an acceptable solution to upload scores to RobotEvents or there are other tech issues I’m not considering? Worse case, can we create a hotspot on a phone, place it in a corner with somewhat acceptable reception and connect the laptop’s WiFi to it then bridge so TM sees internet and upload scores? Is that something that can work? Is there a way to test connectivity to RobotEvents from TM without actually running a live tournament?

I do a similar thing with routers

Everything on my internal TM network (10.x.y.z) is managed by the first router. If it’s not a 10 network, then it gateways to the second router that connects to the hotspot.

Your plan should work. My schools also lock everything down, and tell me no when I ask for guest access. I’ve also asked for a school laptop with wireless access, but then getting TM installed on it is way too many hoops.

I don’t know of a test TM event, @Dave_Flowerday should see this and be able to comment.

If the laptop that runs TM has a direct connection to the internet via a SIM card or hotspot, then it all should work OK, though you might want to make sure on your private TM network to leave the setting for a default gateway blank.

Basically, only the computer running the TM server needs to have internet access. Below is a quick picture of what should work. Use a wireless router to create a private network (10.x.y.z in the diagram). Configure the wireless router to NOT have a default route, and don’t plug anything into the “internet” port on it. Use ethernet from the TM Server laptop to the router and to any wired displays or field controls. You can also optionally use wifi for referee tablets.

Then, set up a wifi hotspot (using a different SSID than the TM network) and have your laptop join it. That should provide internet access to the TM Server to upload things, and the rest of the network stays isolated and doesn’t need internet. 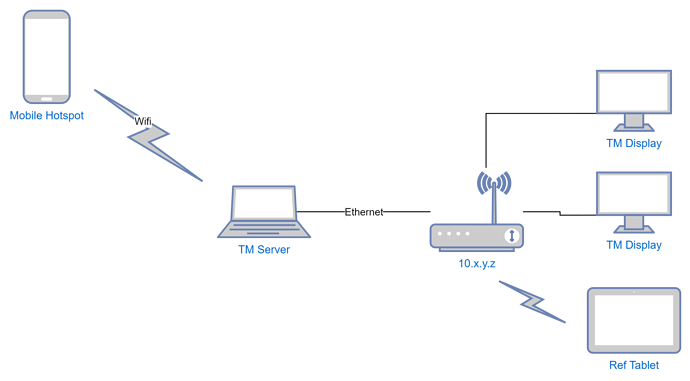 There aren’t any test events, however if you go through the TM wizard and type in the SKU and TM code and if TM can automatically download the event details and team list, then everything should be fine. That uses the same network connections as uploading results would.

if you go through the TM wizard and type in the SKU and TM code and if TM can automatically download the event details and team list, then everything should be fine. That uses the same network connections as uploading results would.

I normally use the exact layout in Dave’s photo for my events.

One thing to note is that there are scoring templates (?) that need to be downloaded to the tablets (at least on Android). So the tablets need to network with TM and be on the internet at least one time to be properly configured.

Fortunately our school IT provides us with a Robotics SSID and we can use our tablets on that network to connect to the TM server. Otherwise, you may need to connect everything to a network that has WIFI for the initial configuration.

Thank you. Got it to work! Appreciate everyone’s help and suggestions.

I had a me issue where Windows 10 would cut internet the moment I would wire the laptop into the TM private network. Fiddled with it a bit (tried to swap network adapter priorities etc…) then gave up an changed the “Minimize Number of Simultaneous Connections to Internet” setting to allow combined connections in the Local Group Policy (I understand it’s a security risk and I might accidentally expose a private network to the world at large but I promise to use it responsibly).

While playing with the different features/options of TM, stumbled upon the webserver. It is mentioned briefly (why?) in the 2020 documentation for a 2018 version of the software (is there a newer one I’m not seeing?) but I find it to be such an awesome resource.

I have 2 silly questions about it:

Re windows cutting the internet when connecting to ethernet - this is an issue I have experienced often.
The better solution I’ve found is to alter the interface metrics - this is what windows uses to prioritize connections. All interfaces are set to auto be default, which means windows will always choose ethernet over wireless - normally a smart policy, but doesn’t work so well for vex.
For me, I permanently have wi-fi set as higher priority over ethernet on my laptop, since the only time I have both is when running vex events.

There is a “scorekeeper login”.

I’m not sure why that’s still hanging around; we probably had grand plans to allow scoring from the web page that never materialized. The only ways to score a match are with the TM GUI and TM Mobile.

There is an “inspector login” that I find awesome.

I agree, it’s much better than collecting an intermediate paper record. We’ve been using the web interface at Worlds for many years without any issues. I don’t remember if they still collect on paper and transfer to TM or if it’s all in TM now.