Currently, we have the STEAM (Science, Technology, Engineering, Arts, Math) divisions,
and then we have:

And I request that the RECF consider renaming the following:

Then, we will have STEAM and (the last 5) Mars vehicles.
(there is no reason other than cool factor for this request)

It sounds cooler, but I would think they prefer to keep the words that align better with VEX robotics then they would mars rovers. Every team is required to research, design, and innovate as a part of the design process, but Mars rovers are not quite as closely tied to the program

Mars rovers are not quite as closely tied to the program

however mars rovers are at least 3300% cooler than anything vex

research, design, and innovate as a part of the design process

Yes, but also, teams need Ingenuity to innovate, Curiosity to research things, and Perseverance to fine tune the design.

Hey @Foster, if you could ask one of your secret sauce contacts at the RECF to see this, it would be great. IDK if they check the forum, and I don’t want to ping Dan or GDC unnecessarily.

kids these days don’t remember the struggle asking for HAMSTERS…

From a practical standpoint, renaming the divisions would mean throwing away a lot of expensive banners and signs (like the giant ones they hang on the pillars and from the ceiling and on the back of the bleachers). Would that be worth it, from both a cost and waste perspective? I personally don’t think so. 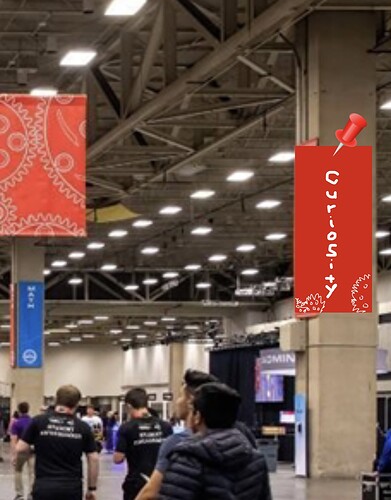 Good point. Didn’t know that they were reused, but it makes sense when I think about it. Probably not going to happen then.

A very high percentage of the signage in Dallas this year was used in Louisville previously. I’ve heard they will be remaking a lot of for this year based on the layout of things in Dallas. There’s even the rumored possibility of having 12 divisions this year. So, you never know.

During each of the events, the other half of the venue had pits that weren’t being used or staged for another competition. So when MS/VEX U/JROTC was competing, there was an unused set of pits. In theory with a moving day you can use all the available pit space.