Hello VEX community,
With the VEX pitching in challenge there are two designs with their cons, and pros, that are effective for different things. Flywheel launchers, and catapults. Catapults for efficiency, and flywheels for accuracy. The basic concept (As far as I understand) is that the when the catapult mechanism (Choo choo mechanism) is turned inwards, it will fold out. While this is happening the rubber band on the back is storing up energy, and tension. This rubber band is what makes it work because it wants it to pull back, but then it pulls around, causing the catapult reaction that we want to see. My description is just confusing, so I attached an image. Based on this concept, we need lots of rubber bands to make it powerful enough to fling back. (Launch two balls at a time in our case) This has led to teams (That are launching one at a time!) on our school wide robotics program using a plethora of rubber bands on their catapults. Our coach had to order more because of the demand of them across the board anyway (This challenge relies on them quite heavily) We ended up switching to flywheel, but I am interested, if you were to amp up the torque of your gear ratios, would the rubber bands store the torque in them, or would it just leave it unaffected. Would this also limit the length the catapult would have to swing its catapult arm to get them in the goa (Since it could be more powerful with less rubber bands? I am curious as I would still like to make one.
Thanks for the help
10XtotheC
P.S.
Here’s what I was describing above. 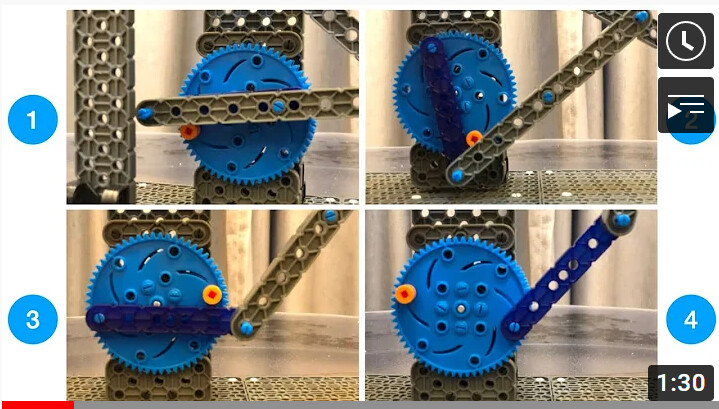 Catapults for efficiency, and flywheels for accuracy.

I wouldn’t necessarily say this. From what I’ve seen, catapults are better in pretty much every way: they can shot more balls faster and they don’t need to spin up after each shot. Flywheels I’ve seen are actually less accurate because they need the speed of the flywheels to be exactly the same every time, which it’s often not so it’ll sometimes miss shots. Catapults, when tuned correctly can make the same shot again and again because it is easy to store the same amount of energy each time with a choo-choo mechanism. However, this is not to say that flywheels are bad, and I’d still encourage people to try them.

using a plethora of rubber bands

A catapult should not need this many rubber bands. Currently I am running mine with 3 rubber bands, and it seems to work just fine. If you could send pictures of your robot, we might be able to help you increase it’s efficiency and make it use less rubber bands. Additionally, rubber bands aren’t usually that expensive ($8 for 700), so I wouldn’t worry too much about it.

if you were to amp up the torque of your gear ratios, would the rubber bands store the torque in them, or would it just leave it unaffected.

I don’t have my old design together anymore (switched to flywheel), but I was curious how they worked, and could be more effective. Perhaps the rubber bands aren’t stretched out enough, for an adequate amount of energy to be stored. I don’t use catapult because we had rubber band issues, and slow speed issues, although I do think the catapult is the better design choice (for this year’s challenge). I think that we aren’t stretching them far enough to store a good amount of energy (From what you said) When you say geometry what do you mean. Does the shape of it (relative to the rubber band placement) impact the way it moves? If you had geometry problems what was your first catapult like, an how did it’s geometry change, for the better of the catapult? Does the length of it effect the way it works too? Since it’s a lever wouldn’t be impacted in some of the same ways? (For example if it’s shorter is it better, or if it’s longer is it better?)

Currently I am running mine with 3 rubber bands

Did you split up the rubber bands into sections of the catapult. Like on the left side there is one, in the center, and on the right side? I think that could be another issue too. I’m not using the catapult, but most people are using a modified Fling. I’m thinking that based on what you said their rubber band length does not extend to a good size to store up the proper energy, the single catapult arm extends and then connects to a doubled up hook, I think that maybe that weight, and the geometry of the arm itself, doesn’t distribute well. A more geometrically rectangular design with rubber bands sectioning of 3 parts of it, and the weight, and power distributed more equally. Please correct me if I’m wrong on anything. I don’t have any photos, but from my description, does that sound right?

Your post was really descriptive, straight to the point, and helpful, so thank you