There seems to be some inconsistencies and unaddressed edge cases with the TT rules regarding the autonomous period, autonomous bonus, and bonus match load cubes. Not that anyone here has an official answer, but until the official Q&A opens, I thought I’d throw this out here and see what people think.

There are a bunch of definitions and rules that deal with autonomous. Without quoting them all, these are things that seem to still be unclear to me:

So it really doesn’t make any scene.

In the case of a team from both alliances committing a violation during autonomous, the rules say that no autonomous bonus is awarded. Is this truly no bonus, or is it 3 points each? What about the match loads?

In the glossary, the autonomous bonus is defined as both the cube bonus and the point bonus, so I think it’s safe to say that neither are awarded

I copied it from this season’s game manual

The autonomous bonus in 6 points for the winning alliance. This only factors into match play. The winning alliance also gets two purple cubes. I assume that each alliance gets one cube and 3 points apiece in the case of a tie because the cubes have to be put into play, and a net gain of 0 does not give either alliance an advantage, but also accounts for SP.

On the other hand, AP (Autonomous Points) refer to the amount of times a given team has won autonomous mode throughout thier qualifying rounds for the purpose of accuarate rankings going into eliminations.

These are two completely seperate metrics, and it’s best to not get them confused.

The especially confusing thing is the where they diverge. The edge case of autonomous ties is like this. As far as I can tell, while the bonus and cubes are split in the case of a tie, teams should still get 0 AP.

Yes, it appears that any tie would consist of 0 AP’s being awarded, as evidenced by the wording that the “winning alliance” would get AP. And only the winning alliance.

As long as AP is consistent, it doesn’t matter how many points it is. The autonomous bonus is what will change year to year, as scoring metrics change.

These are two completely seperate metrics, and it’s best to not get them confused.

That is a possible explanation, and may end up being correct. There is no precedent to have the number of Autonomous Points awarded for ranking purposes differing from the number of points earned during a match from the Autonomous Bonus. The rules even use the terms interchangeably in the Tournament section.

NBN was the last competition that didn’t have 4 points awarded for an autonomous win (it was 10), and SS the following year is when the Autonomous Points for ranking were started.

I just looked back at the rules for TP, ITZ and SS. Each of them defines Autonomous Points as being in the amount of Autonomous Bonus points earned by an alliance in qualifying match. The TT rules specifically change the ruling to state 4 points. That leads me to believe it was an intentional change and not an unintentional carry-over.

It still doesn’t make any sense to me to award 3 points to each team in a tie, especially if there is no movement by any teams in autonomous. That means you could have a match where there are four robots on the field and none of them move the entire match and it ends in a 3-3 tie. I know that similar things could have happened with TP because of the scored state of objects at the beginning of a match, but it seems strange for it in TT when you need to move every object to score. I would much prefer to see the tie only awarded if there have been scoring actions performed in autonomous yet it still is a tie. Also, as far as scoring mechanics go, the scoring tablets and TM will somehow need to allow for no autonomous bonus (when both alliances commit a violation), tied autonomous, and winning autonomous.

Looking at the new version of VRC Hub, I don’t see how it supports the concept of a tie in auton and awarding the 3 points.

And the winner also gets 4 points not six.

Sorry for the confusion. I ment to reply to @sabarrent328 who indicated that the app is wrong. I was pointing out another area where it is wrong.

The app also does not score cubes unless there is a same colored cube in a tower.

I’m running the ios version and it gives 6 points and cubes are scored without any in the tower. Must be a different codebase between the two OS-s.

Its early. Bugs are bound to exist. As long as it get cleared up, it will be fine. 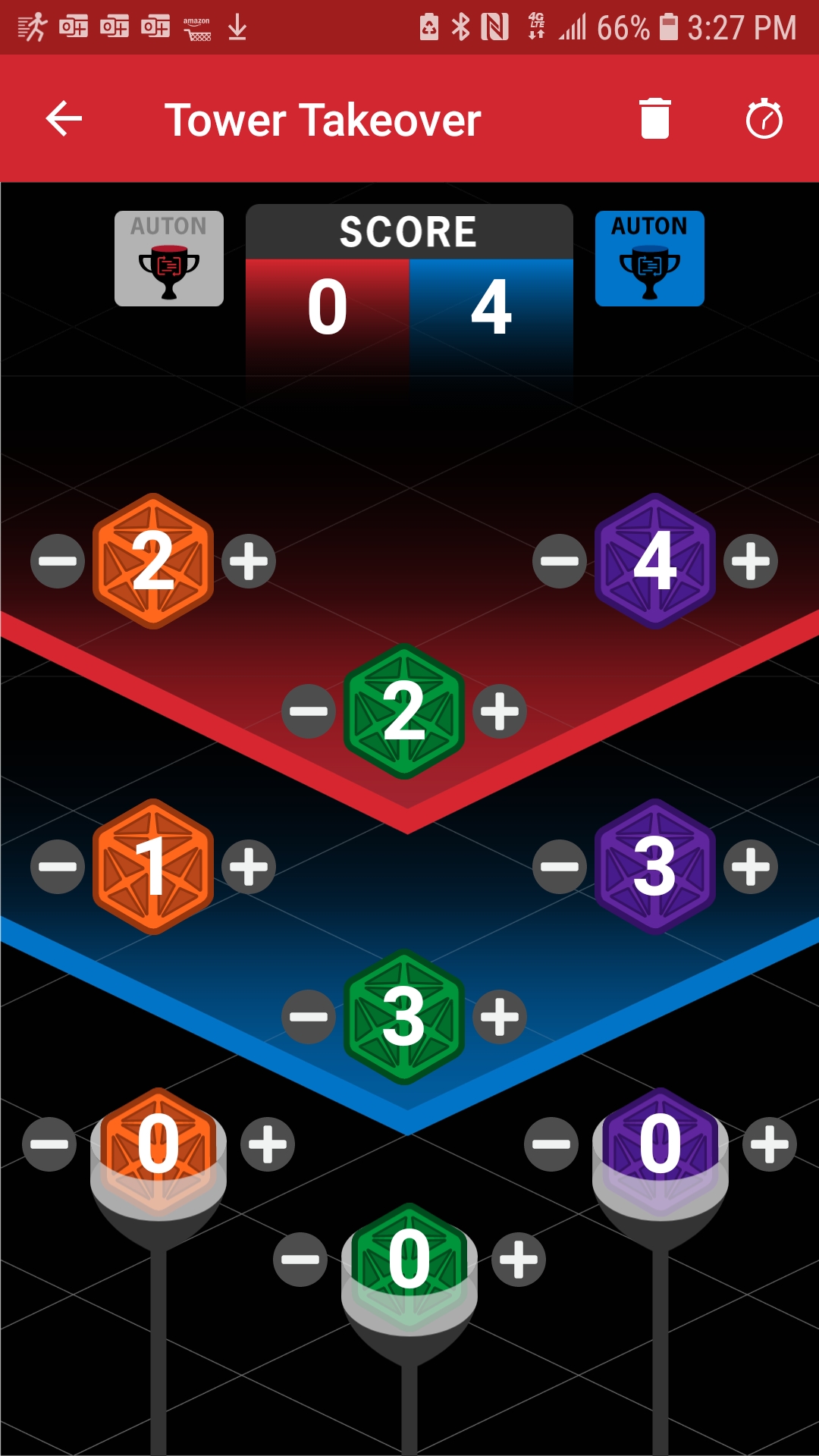 This is what I see on the Android app.

My Android app works fine. Try seeing if the app shows it needs an update in app manager.

yep, that was it. Funny, i didn’t have TT in VRC Hub Saturday at worlds, but when I opened the app today TT showed up. The last update said it for was Apr 27. Wonder why it didn’t auto update?

still can’t tie in auton though.