I have been looking at the Tower Takeover Field from different games in Detail and I have realized that their doesn’t seem to be much of a pattern or rules of placement of the cubes at the beginning of the game. The only reoccurring trait would be that the outer tiles tend to have no cubes and that the cubes are already stacked closer to the center towers. I was wondering if anyone has found any info on the placement of these cubes or have noticed anything about them. It may seem simple but it could help a lot to know the most likely location of certain cubes and their colours.

The cubes have a very specific starting position - it’s found on just about every page of the document above but this is the best one with the specific rules laid out: 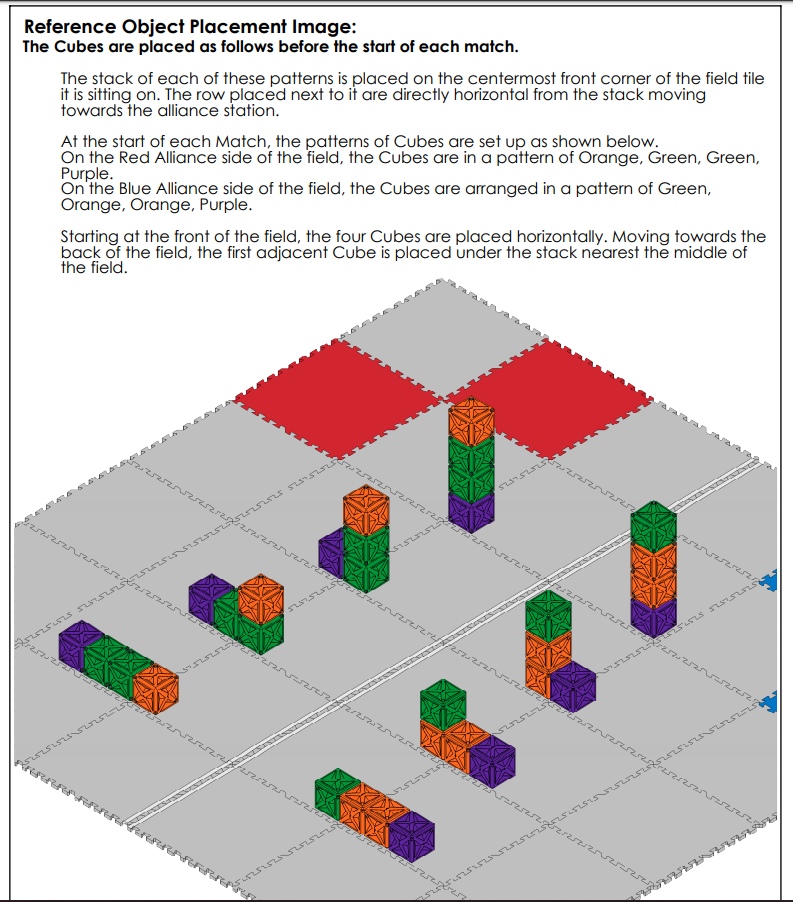 Thanks, I was overthinking it, I initially thought it would be random and looking the games from video clips made them look random, probably just my mind telling me what I wanted to see. Now that I look at it, and looking at the document, I can see the cube starting positions.

You may see that on a skills field that they don’t always set up with the colors correctly as the color don’t matter. I’m too particular to let that fly, but I’ve seen it from time to time… Like when I kids reset for skills.

Interesting, could be put to use though, if you win the autonomous stage, you’ll probably want more of the same color of the two cubes you get to place down

I actually didn’t think of that, that’s a much easier + time efficient way to set up for skills

I just read that over, what do mean by “skills field”?, am new to all this, I haven’t learnt all the terminology yet.

At the VEX event, you play matches with three other bots. But what if those other bots catch on fire?

Skills is a separate part of the competition, where you go just your one bot and try to score as many points as you can. At an event, the skills field is usually off to the side and you just line up as you have time.

The separate rules are linked above. The global skills list is here:

That is a much better way of explaining it
Thank you

Thanks, that makes sense, now I’ll have to go some readings of these documents for skills