HI, I hope that I have this posted in the right place and sorry if it is not.
My question is about the tray for a tray bot.
Here is my situation, I build a robot with my friends and we made it 18 in back to front, now we are thinking about shrinking it either 5 holes and putting a tray that uses angle bars ( takes much less space) or shrinking it 10 holes and using a C channel tray (much less compact). So what do you think? Also what are the pros and cons of each type of tray?

First, do you have to shrink the drivetrain? If you can fit the tray, you shouldn’t have to worry. Angle trays, while more compact, generally have less support on the sides of the cubes and are likelier to drop them, which is why you see many traybots with plastic walls on the sides of their trays. C-channel trays avoid this problem, and are slightly less compact.

Isn’t C-channel trays are heavier than L-channels? Do you have a picture of cchan tray that is better at holding cubes. Just curious, no spying for your secrets.

Yes, the drive train. We wanted the trey to be in front of the wheels to make it easier to put the stacks.

I will try to get a pic today

Not by much if at all

If you want to fit two stacks of cubes in the large goal zone, the smaller you can make the width of the drivetrain (side to side), the better. Length doesn’t really get in the way this year, and a longer base provides more space to build plus better support against tipping so I don’t see any reason to shrink that aspect of the robot.

U could use a 1 by angle tho

wouldn’t c-channels be harder to fold down into 18"? (bc they dont stack on each other)

You have the top stage extended up with standoffs, but for the bottom stage, use plates or polycarb to make the walls higher, just inside (or out) of the extended c-channels on the top stage. If you want a third stage, make it a cascade.

I was trying to post a pic but I don’t know how to but It basically has 2 c channels side ways facing out. Then they are attached in a very similar way to the robot goofy. You could look up “vex tower take over goofy” it l’s the documentary one. 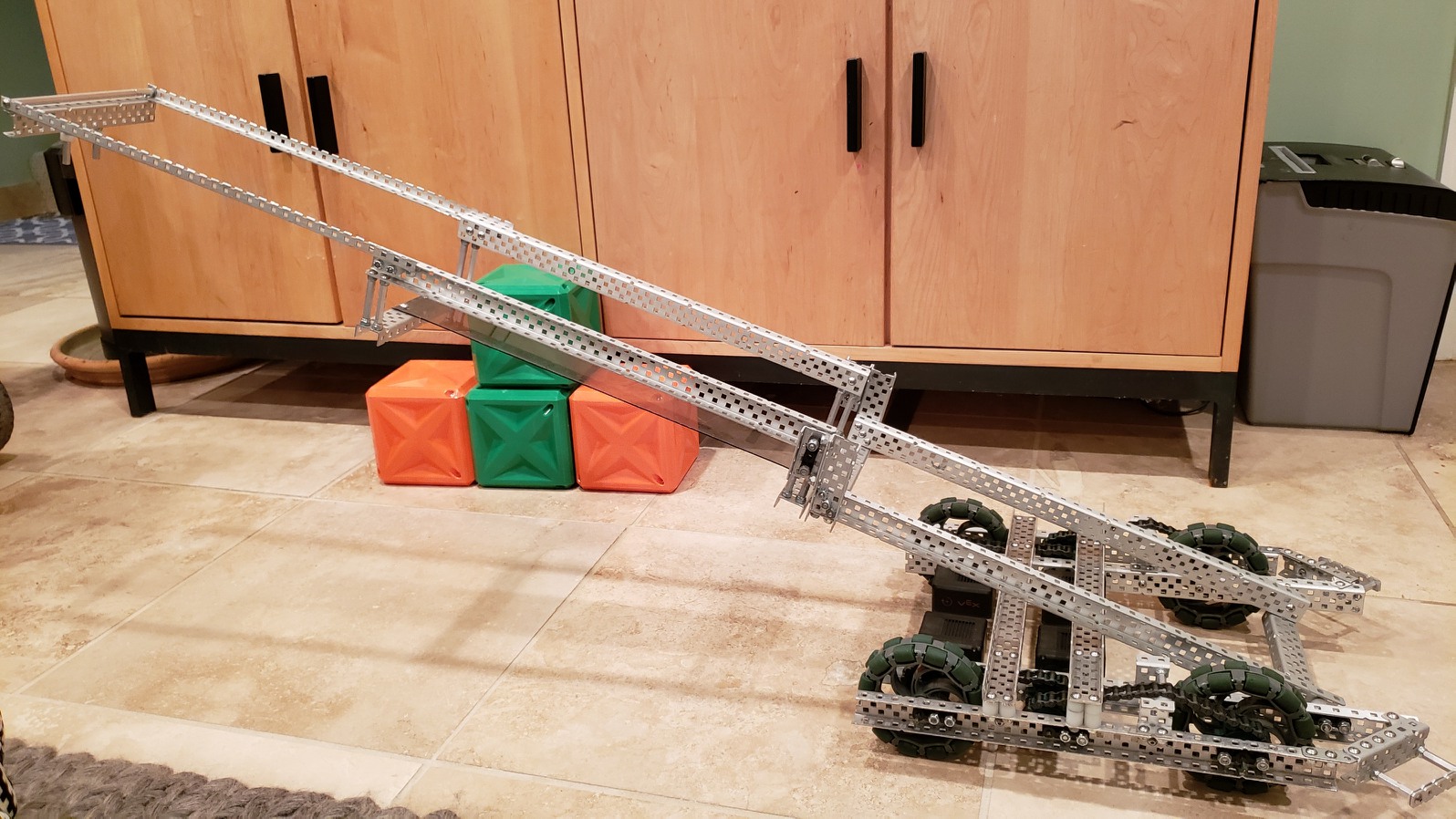 This is the early stage of our tray. The bottom for the cascade isn’t attached yet, nor are the walls I referenced on the bottom stage. The walls look like this: 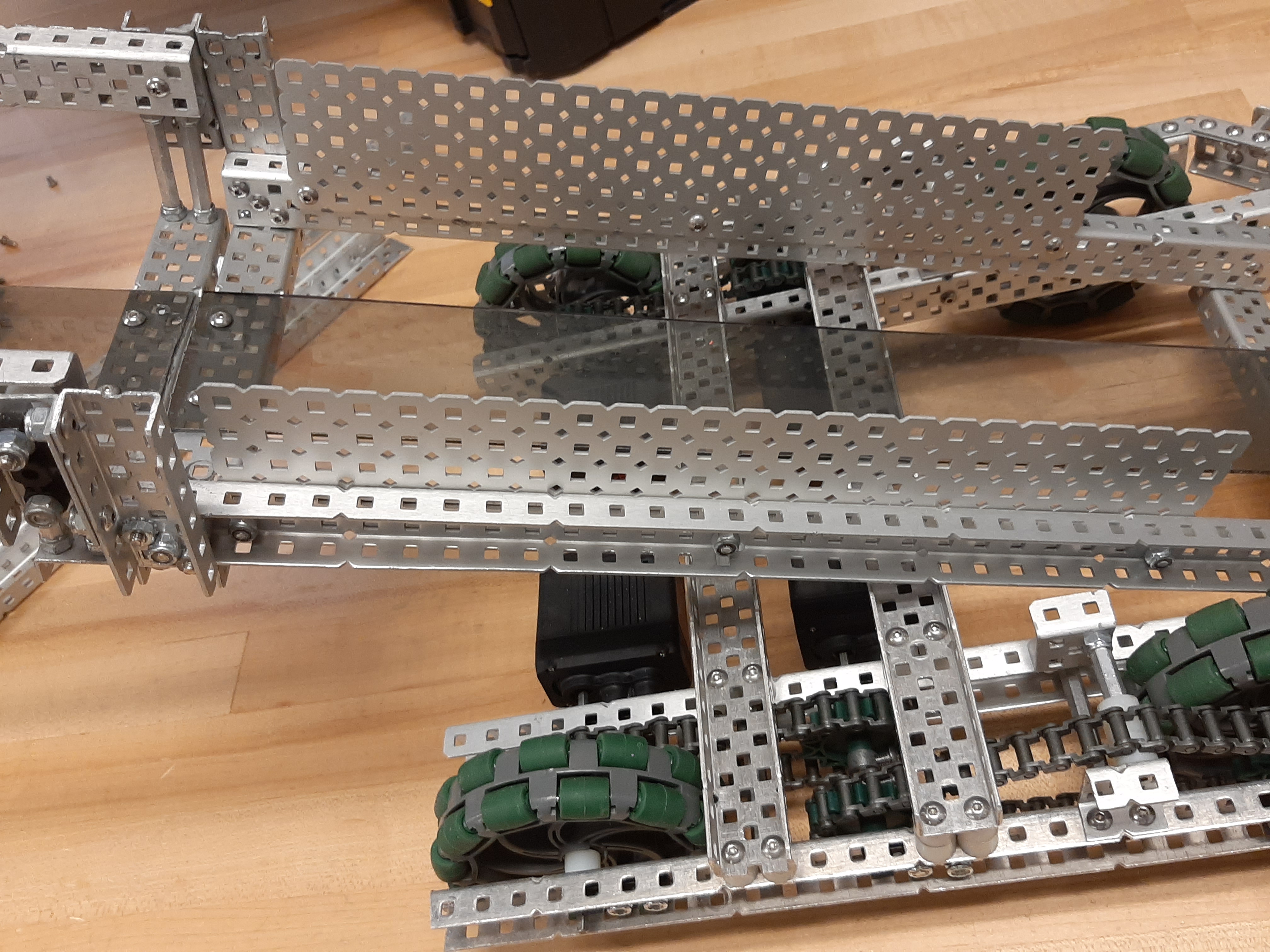 They slide just inside the top stage.

i think that the c channel may not be heavier if thats all you’re using, but because of the extra addons with the standoffs and a bulkier mechanism to connect each stage, it becomes heavier

I was able to use the same mechanism for both methods. An advantage to C-channel tho is that screw heads can be hidden when mounting lexan, which makes a more flush tray. A disadvantage with C-channel is the tray must be 2 holes wider.

we use L channels and have most of the screw heads hidden with the lexan. tbh after a lot of testing, we realized as long as the screw heads are closer to the outside, the cube doesn’t really get affected by them.

Yea the cubes have nicely tapered edges so they can make it over screws, zip ties, etc no problem. That being said, the smoother the tray, the more efficient intaking becomes.

yeah but small things like screw heads on the exterior or zipties dont hinder the intaking enough to matter.