Back in May I hinted that I may resurrect my triangular drive chassis that was designed during the 2013-2014 Toss-up season. This past weekend I finally finished the work I started back then, it’s not designed to compete (obviously) so this pretty much ends development of this iteration for now.

Here’s a quick recap of how I ended up with this design.

The original prototype from 2013. 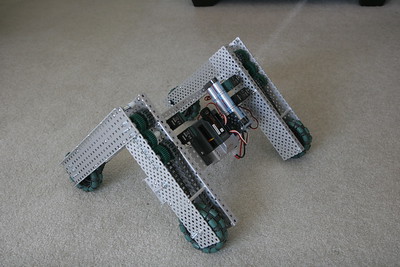 This drive was created in 2014 and incorporated some my favorite ideas from that time, it’s the basis for this years drive, I use exactly the same construction with internal motors and allowance for either mecanum or omni wheels. 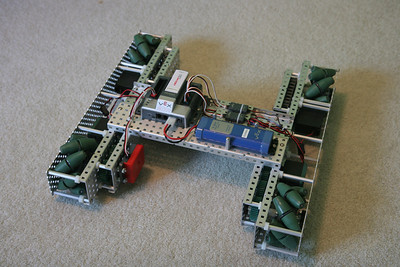 There’s a whole thread about that drive here.

There’s not been much discussion this year about the best style of drive for a Skyrise robot, not really surprising as we don’t have the obstacles (bump, sacks) to deal with that we have for the last couple. I’ve been thinking about building a new drive to be able to look into programming the accelerometer and gyro as there seems to be renewed interest in these sensors. The last robot I built had a small chassis (open source robot) and this time I wanted to build something with the full 18x18 …

In 2015 I was playing with the triple lift and used that 2014 chassis as the drive system. 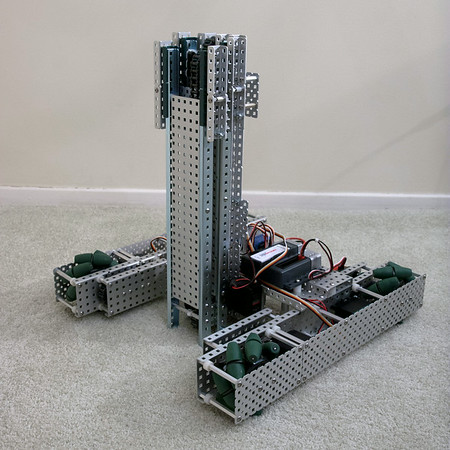 About three years ago I posted an animation of a conceptual triple lift to try and explain what team 1103 had done for roundup. https://vexforum.com/showpost.php?p=189388&postcount=171 I never had a chance to build the lift, team 8888 did build another variation for gateway but it was slow and heavy. So here is a preview of a new lift design I’m working on, not many details, there’s no CAD and I probably won’t have time to develop this much more. It’s only three stages at present and uses tw…

and 2015 was all Flywheel control, I never did actually build a complete robot.

So here’s the 2016 final version.
4 Motor drive, speed gearing, two IMEs for keeping the motor current under control using the smart motor library.
4 Motor two bar (??) arm, torque gearing, single IME with PID for arm angle.
1 Motor intake, quad encoder that slaves the intake angle to the arm.
Weight, 13lb.
It only picks up single stars, no attempt at all on the cubes, it would need a better intake to compete but as I said development is over. Once it high hangs all power can be removed and it will not drop, the CG is such that there’s no need for a latch or anything.
Programming is all ROBOTC and is mostly borrowed from the “open source robot”. 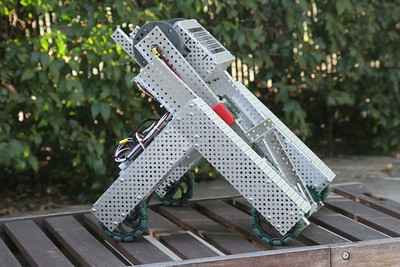 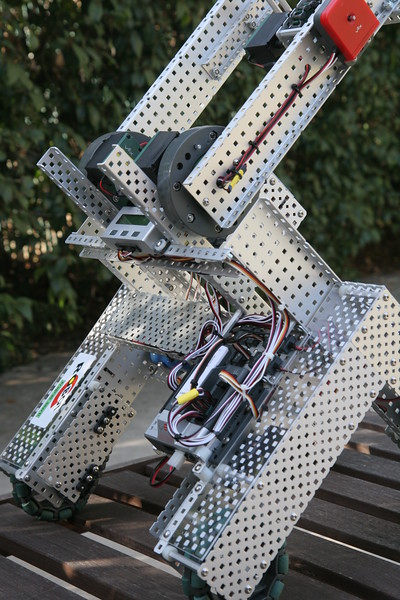 The CAD showing how it high (almost) hangs. 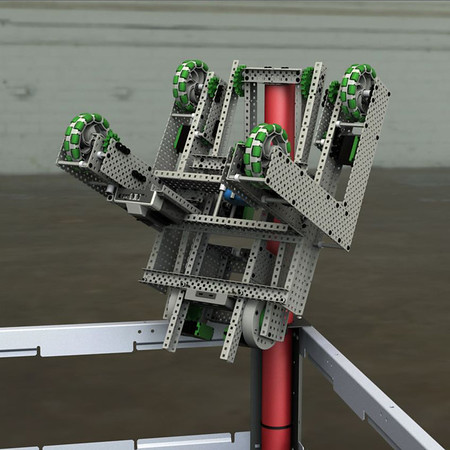 and a short video showing off how bad I am at driving.

Thanks for the inspiration, designs like this teach you to think about your robot design in other, more, err, exciting ways. Might have a go at building something a little more complex and awesome when I next have the opportunity as part of the programmers hiatus I am currently attending (my team wont let me anywhere near the robot :3).

I just have to say, this thing is amazing.

Every time James posts a picture of a robot I am always blown away. Partially it is the wiring being done so well but I have to assume part of it is also the fact that the metal all looks pretty much brand new. It just looks so good.

This is really cool! This is the first time we have heard of this, Its very creative and efficient. :3