Hello,
My team has been working on a 3-stage reverse 4 bar lift this year. When we raise it under it’s own power, it goes up without much strain on the motors or any skipping, but has a major tilt to the left every time. We have tried tightening down all of the connections, but it barely helped. We don’t have potentiometers to fix it with software. I will try to post pictures as soon as I can. Any help would be greatly appreciated.
Thanks!

In general, lifts this tall have a lot of sway, and if one side gets just a little behind the other it can quickly become magnified. You should connect the two sides of your lift on all of the stages at as many points as possible.

As has already been said, check that your connections are fine and any elastics are identical on both sides. Also check your motors: are they all plugged in and working, are they all the same high/low speed, are none of them broken, same power in programming, and also that none are plugged into ports 1 or 10(they give a bit less power than 2-9).

Also, do you have both sides linked together physically? This should help a ton in making it more stable.

A triple reverse four bar lift is inherently prone to tipping to one side and swaying. However, you can minimize this by physically connecting the sides of your lift where possible. I recommend diagonal bracing using narrow bars, as seen in this sketch: 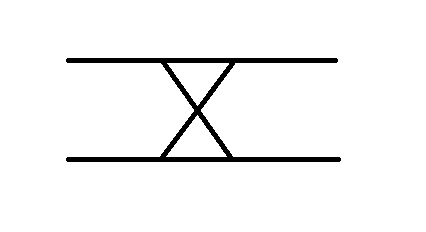 A triple reverse four bar lift is inherently prone to tipping to one side and swaying. However, you can minimize this by physically connecting the sides of your lift where possible. I recommend diagonal bracing using narrow bars, as seen in this sketch:

You should be able to reach the height you need with a double 4 bar, a triple one seems unnecessary. Leaning and twisting is allowed to occur by almost inevitable slop in the joints of the arms, so if you can reduce the number of stages and joints, you can reduce the amount of slop in the mechanism. This can reduce leaning and twisting of the lift, similar to a 1-stage 4-bar being much sturdier than a 2-stage version.

I use 2-hole-wide c-channels for the main lift bars and 1*25 bars for the bracing.

I use 2-hole-wide c-channels for the main lift bars and 1*25 bars for the bracing.

Hmm, OK thanks. Might have to try that later on. We have 5-wide c-channels going straight across, perpendicular to the lift bars right now.

Thanks to everyone who responded so far!
We are doing three stages because of the odd design of the lift, it was simplified by removing the offset in typical double reverse 4-bars (when down, the bars hit directly on top of each other) so it only is about waist-height as it is. We will double-check the motors and elastics, but I am fairly certain those are fine. We only have two cross-braces at the top, so we can try adding more soon.

The answer is 2 parts. Part 1 is that things like this are when easyC makes everything more difficult.
Part 2 is the actual easyC answer
and this is the Pseudocode
arm_left= what you would send normally+ (angle_left -angle_right)constant)

^This is the the most simple way to do it from a coding perspective.

Would love to see some photos of Thai triple reverse 4 bar.

I know what I’ll be researching tonight

Have you tried using Integrated Motor Encoders on the lift motors? It keeps them equal.

my team had a similar problem to yours. it was with our toss up robot we had a four bar with two motors and one side would always raise faster then the other. we found out that one motor was geared internally for speed and the other was torque. I would check that first, if you have not already fixed it. I hope this helps

Use a PI or PID controller. Here is an explanation of them.

I finally have some pictures to show!
https://drive.google.com/folderview?id=0B6WP2v5N6ApzekJMMmcxcXBvcUU&usp=sharing
The elastics holding up the claw are temporary, we don’t have enough 1X25 to attach it right now.
Thanks!

I finally have some pictures to show!
https://drive.google.com/folderview?id=0B6WP2v5N6ApzekJMMmcxcXBvcUU&usp=sharing

The elastics holding up the claw are temporary, we don’t have enough 1X25 to attach it right now.
Thanks!

I would say connect the left and right sides in more places. And, try to connect the vertical rails (the ones with all the bearings) with more than just axles and collars. And, you need to put bearings on the rails that make up your 4 bars.

Also on a side note, (I assume you just built this out of what you had) in the future I would buy more c-channels and less chassis rails.

I finally have some pictures to show!
https://drive.google.com/folderview?id=0B6WP2v5N6ApzekJMMmcxcXBvcUU&usp=sharing
The elastics holding up the claw are temporary, we don’t have enough 1X25 to attach it right now.
Thanks!

The 2 motors on the lift at 1:3 does not look like enough power to make your lift work. Most times teams use 4 motors at 1:7 to make RD4B and you have an extra 4 bar on top of that.
In terms of lifting strength 1:3 on a triple 4 bar is the equivalent to 1:1 on a single 4 bar.

It also looks like your lift is all made out of steel which isn’t the end of the world but needs to be built around. The lifts I referred to that have 4 motors 1:7 are designed to be extremely light and use all aluminum.

Also the axles and bearings used for all the joints can cause extra friction which even more factors into how much power is needed to lift. As well as friction they will have a lot more slop than a screw joint.

The design of the 4 bars actually means you lose about half the height on each one because it can’t go below the horizontal. A 6 bar could probably reach higher than the current lift and would use substantially less metal.

The 1X25 metal bars along the top appear to pull the 4 bar away from its natural location which in turn would create even more friction as all the joints are torqued inwards.

It also doesn’t look like you are using full 17.5 inch long pieces of metal for the lift. This would help lift higher without the addition of more towers/ more friction.

Hope all this helps. :D:D

We are doing three stages because of the odd design of the lift, it was simplified by removing the offset in typical double reverse 4-bars (when down, the bars hit directly on top of each other) so it only is about waist-height as it is. .

As Griffin mentioned, you are losing about half your potential height since the four bars can’t collapse past horizontal. When you are designing and you see a potential problem, e.g. the bars are offset on a rd4b, you need to make sure it is actually a problem before you build something to fix it.

Analyzing problems is a crucial step in the design process, so ask yourself “is this actually a problem and what are the consequences?” Otherwise, you may end up creating more problems than you are solving by adding weight, loss of height, friction, complexity and instability.

I would strongly suggest scaling back your design. Simple can often be better; it’s all about execution. Start by coming up with some realistic working criteria for your design. How many cubes does it need to carry? How high does it really need to reach? etc… Start off with goals that you know you can accomplish, and with every iteration you will find that you can accomplish more.

If you haven’t seen wingus and dingus’ robots yet, they are a testament to what simple robots can accomplish. Link here:https://www.youtube.com/watch?v=ClGWg43TtCI

I don’t usually make such long posts but I feel like less experienced teams have it rough this year. I hope this helps in some way

Echo what arronlucas says about scaling back. Best advice here is keep it simple and get some experience with playing the game. 7682 teams thus far have been doing the bare minimum to stay competitive (perhaps being a bit lazy upon reflection) and in the case of 7682E can’t even reach the high post level. Both robots are actually from the Toss Up season with their lifts quite literally jacked up by 6" and I believe that design decision may even have been driven by a lack of long 1x2x1 channel at the time.

Granted something like that isn’t going to win worlds nor perhaps even qualify but take into consideration where you and other teams in your area are at right now. How many teams have world beating fully worked machines? Do you really need to lift as high as 7 skyrise sections in order to be successful at your next event? Good rankings are achieved through consistency more than outright performance. Engineering is an iterative process so don’t worry about scrapping something and starting again because along the way knowledge and experience were gained.

Learn to maximise the potential of something less capable then when you build something more capable you’ll know how to make the most of it. As of today 7682E with the addition of 1 motor and a few rubber paddles is now capable of building 4 skyrise sections - this with a simple pivot lift.