I have more students wanting to be on our high school team than I have room for, so I need to have some kind of try-out process to weed out some of them, unfortunately. I plan to ask for teacher recommendations and look at grades, but what kind of performance task could I do to help determine weaknesses to help me decide who to cut? They all have enough experience that they should be able to recognize all the parts and be able to build, but having them build a bot would be time-consuming, and we won’t know what the new game will be until after try-outs. Any thoughts? Thanks!

Any way you could make more room?

How many “extra students” will you need to get rid of?

I’d try to design a test of sorts that could show abilities in all the areas a competition team needs. For instance:

Build - Following directions! A very simple robot build (could even be just a base or mechanism) with specific directions. As a sub-test on this, could have them build it twice (or do 2 builds) - first is specific directions (including things like screw size), second is loose directions (attach piece a to piece b; see what choices they make in terms of hardware). If you do 1 then 2, you can see if they carry their experience from 1 over to their build for 2, if they try to take quicker shortcuts (like use an excessively long screw just because it is readily available), or if they try to make it a bit better / cleaner.

Program - Then programming some limited functionality to that build; again, maybe part 1 would be with some programming directions and part 2 would be more on their own.

Design - Then maybe a list of potential design changes that they would undertake to achieve some specific goal.

Eng NB - As part of the above, they should document those design changes. You can get a feel for what sort of documentation they think is adequate.

Even more points for then modifying the structure to achieve one of their self-stated design changes (or, if they are leaning towards being a solid builder but limited design expertise, a modification for someone else’s change).

The point of these tests wouldn’t be to “fail” anyone but rather to find out areas of potential greatness and potential pitfalls. For instance, what if 8 people are adequate builders but 1 is a phenomenal builder and 1 can’t build at all but can program well or has an intuitive knowledge of what to document and how to do so? At least that gives you a sense of what they can do, which you can then fit with your current needs.

Had we done such testing at various points, we could have avoided many issues such as:

Adapt this idea for prioritizing spots:

If it is good for DRow, it should be good for you:)

Here is my experience from having coached for a few years:

Keeping these facts in mind, here is the “try out” process that has worked well for us in the past. Tryouts are a full week after school. Some may find that excessive, but the fact of the matter is that good teams need commitment from their members. If a kid doesn’t care enough to come every day for a week, they probably wouldn’t have the level of commitment that we are looking for from our team members. This process does a lot of the “cutting” kids for me. Many kids will decide that it’s not for them and stop coming mid-week. Perfect. Better to have them quit mid week of tryouts than mid-season when their team needs them. For those that do make it through the whole week, this is the schedule:

We do this program, it works well in weeding people out and educating the ones the persevere and stay. 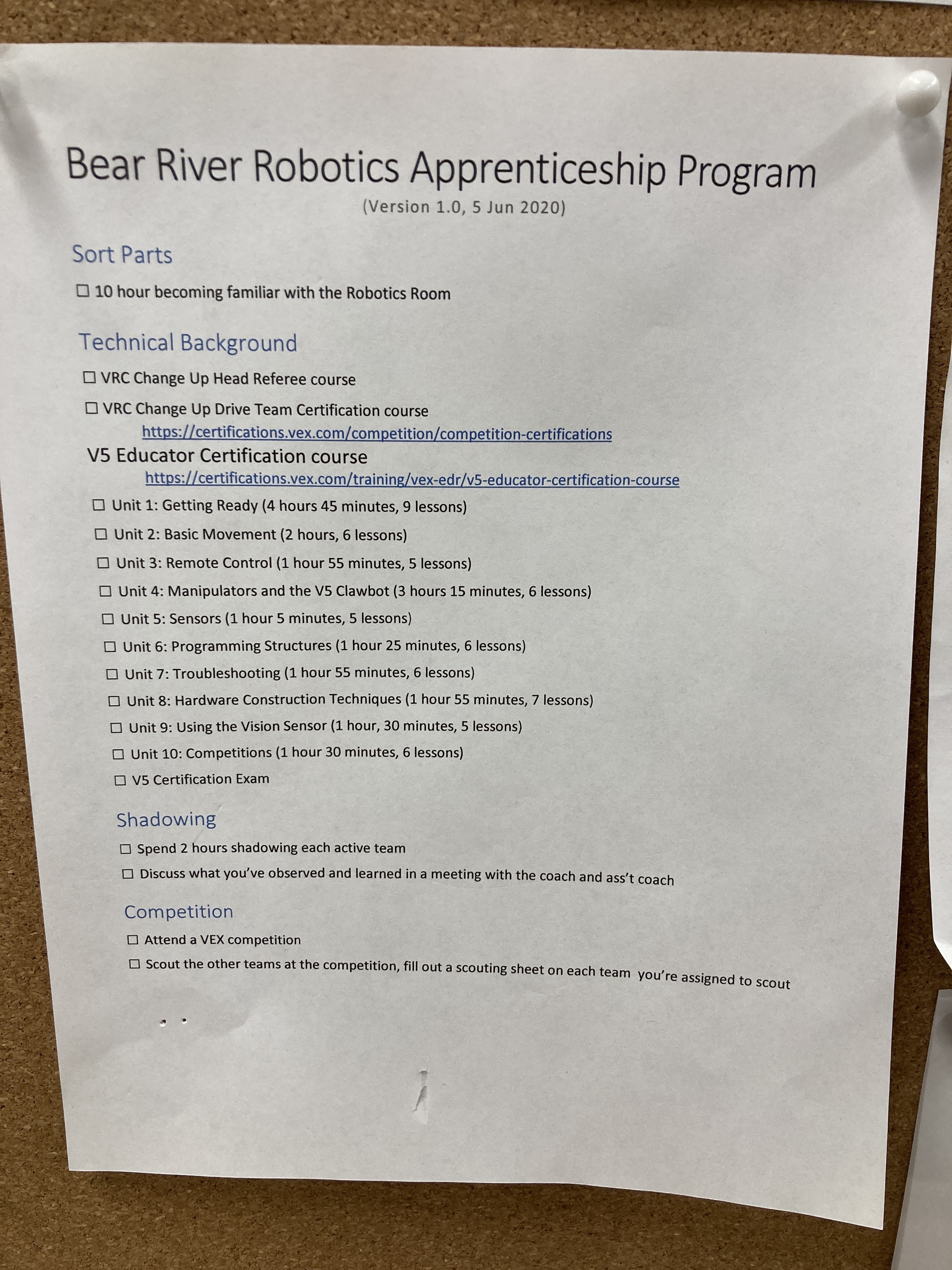 I don’t think taking grades from kids is the most sensible thing to do, I have friends on my team who don’t do very well at school, but when it comes to doing the robot they help a lot, I can’t think of another idea that isn’t make them compete, so you can see how each child is performing in all areas

For programmers, I know Google uses programming challenges as a sort of interview, so maybe try something similar for programmers? You could also try logic based puzzles for those who are new to programming.

I wish we had had this on my team. This would be helpful With weeding kids out and also assigning people to jobs that there good at as supposed to what they want to do once they see the game.(most people in my group wanted to drive so it was hard to find programmers.)

My school would have the kids build robots for a mini challenge, and choose which students made the cut based on how well they worked together and the quality of their design and their execution of it, and if they could drive or program well that was a plus. We’d give tutorials on how to build beforehand, as well as examples of drivebases, lifts, and other mechanisms. The main issue with this was that it could easily take three weeks, so we ran tryouts at the end of the year. This of course meant that students would only be able to compete for three years of high school, but we only really had enough to support 2 teams so this was usually okay.

These are all great ideas, but one thing to note is robotics (and more generally STEM) is about learning. The only pre-requisite a student needs is an unrelenting curiosity. Limiting the scope of your team to only those that have had experience with these kinds of challenges is a disservice to those that haven’t yet had the opportunity to learn but want to learn.

If my team had a tryout based on how well I can assemble a robot, I would never have made the cut. Because they allowed people to participate regardless of their initial level of competence (in the long run) I ended being one of the most involved and successful members on the team (and I say that humbly).

TL;DR In the vast majority of cases, it turns out that the willingness to learn is a much better gauge of competence than a student’s initial level of understanding.

Here is an exercise that I would recommend. This method would be cheap and very fun for kids! All you need is one piece of paper per 2 people, two largersized textbooks or blocks of wood, and a bunch of pennies!

The objective is to fold and create the strongest bridge between the two object with the single piece of paper. You test this using pennies. Just remember the textbooks need to be around an inch or two apart.

As another exercise,
you could supply each group with 4 pieces of paper scissors and 10 pieces of tape all same length. The objective is to make the tallest free-standing tower that doesnt fall over.

LMK what you think

I think that’d be a simplistic oversight into what it takes to be a good member of a robotics team. I think an essay, and possibly an interview is a much more holistic ways of viewing a candidate. An essay question could be as simple as “why do you want to do robotics?” or “how would you approach this problem?”.

That could be useful for more programming type people in my opinion. People who are good with hands-on activities usually are good at building. You could always have someone right a short paragraph on why they want to participate but this way the instructor can see peoples collaboration abilities

You make an excellent point, and although I didn’t mention it in my post, students are not selected based off of their ability to complete the “challenges” we give them correctly, but rather their attitude towards doing something that is likely rather hard for them, and how they treat one another as they do it. We give them a “taste” of what robotics will be like not really so we can judge how good they are at it, or their previous experience, but rather so that they have an opportunity to make an educated decision as to whether or not this is something they want to be a part of, which is important.
We are looking for teamwork, willingness to learn and try, and how they deal with frustration. How to build a quality robot can be taught easily to a kid who wants to learn. If they come in thinking they already know everything and treat others poorly, well, that is VERY hard to un-teach.

Ah, I missed the point of that exercise. Yes, in that case, a group challenge would be a really good way to see how well a student works in a team environment.

teamwork, willingness to learn and try, and how they deal with frustration

These are good criteria, I agree. I think these challenges in tandem with a written piece and an interview would be a good way to choose between candidates in a sufficiently large pool of applicants.

, if they try to take quicker shortcuts (like use an excessively long screw just because it is readily available), or if they try to make it a bit better / cleaner.

I feel like using a shorter screw would be a shortcut

I feel like using a shorter screw would be a shortcut

. Could be, in some circumstances! It was just the quickest example I could think of (I’m remembering a team member who once chose to use a very long screw - since it was right next to him - where a fairly short one was ideal and then being very confused as to why it seemed to keep catching on everything and messing up other areas of the build).