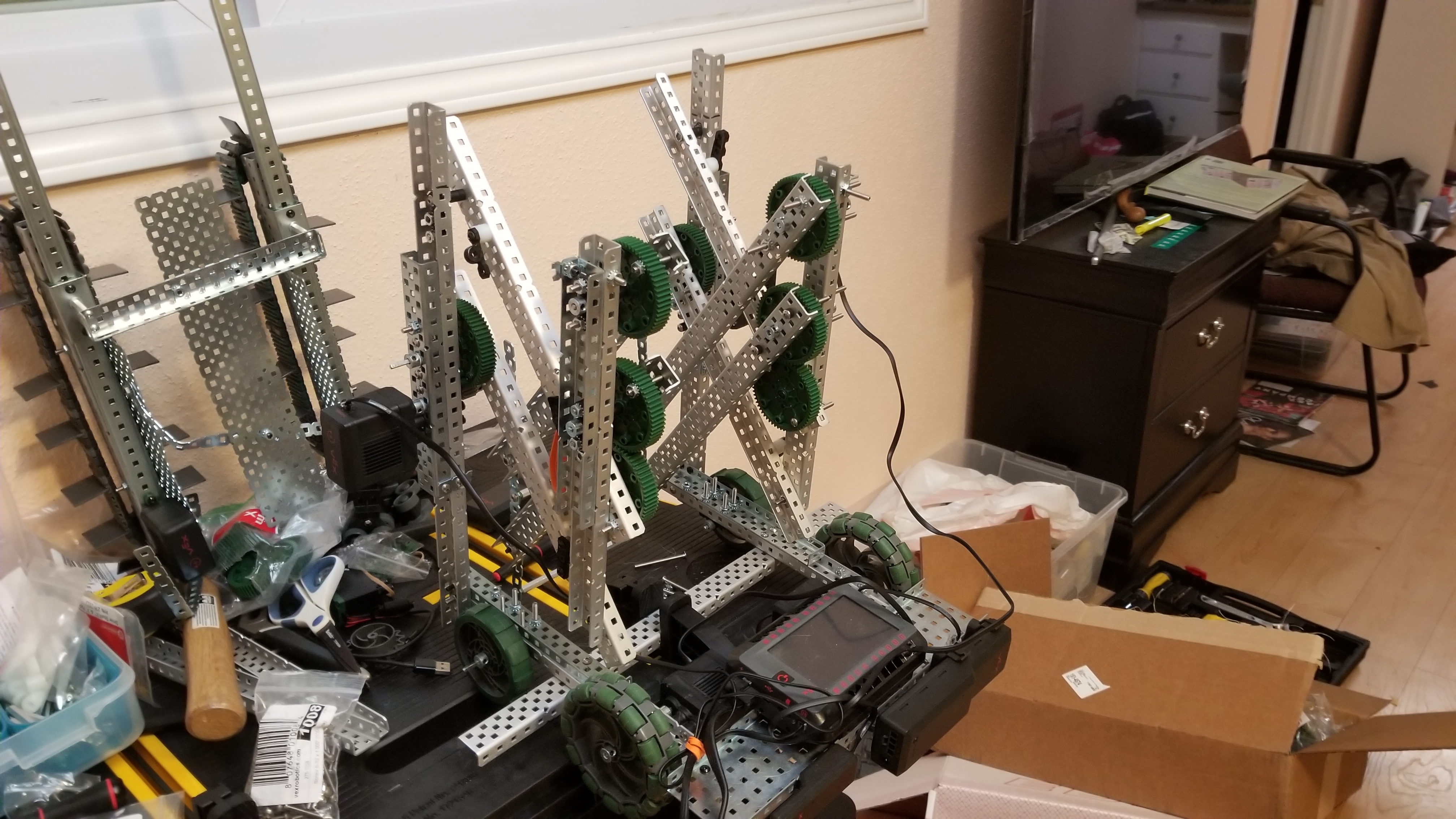 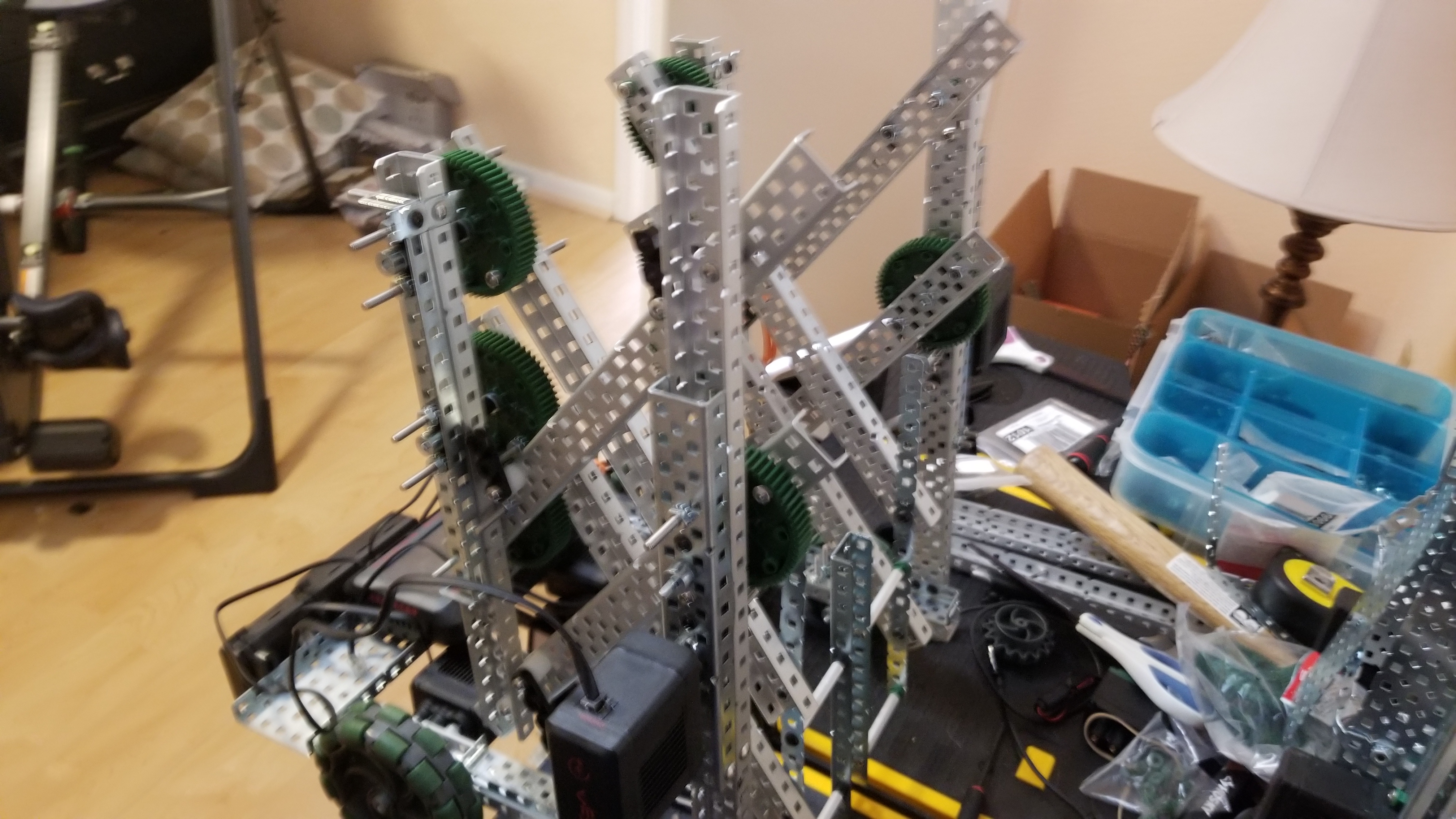 The intake isn’t even on yet, but I just had to share it.
Also, one of the sides looks to be further back than the other, but both sides are the same. Any ideas why?

some recommendations I have:

but still, this is a decent looking start to a robot, could be competitive once you finish it.

Don’t cantilever your drive base, especially on 1/8 shafts. Any radial or axial load on it may result in the failure of your drive train

Your COM and COG are pretty high, would recommend to lower than to prevent tipping issues.

I would also trying to extend and widen your wheel base as much as possible. just one less way to tip.

your bot seems very similar to my early design that was later dissembled.
this is a picture of my small dr4b. It too has its flaws but you can probably use it to improve your design. 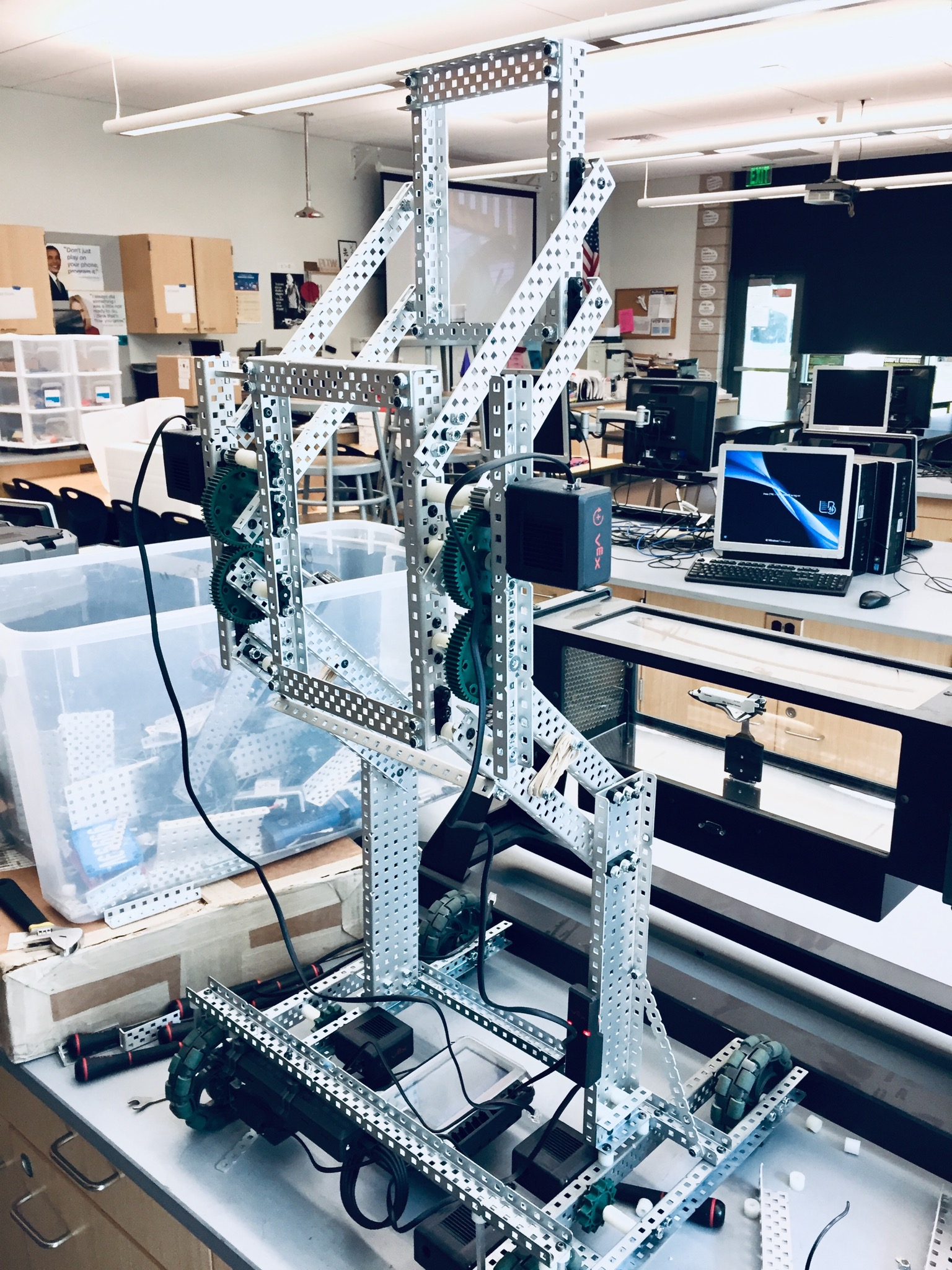 I would cantilever it like suggested, but
I dont have 4 inch axles because I. Cant. Flippen. Cut.
RIP

Something I forgot to put in: the brain and battery mountings are temporary, so ignore those

you dont want to cantilever your axles. put c channel on both sides of the wheels.

Whup wrong terminology.
I meant I have to cantilever them because I dont have axles long enough for bracing on both sides. However, I will keep your suggestion in mind as I most likely will gain cutting capabilities later this season.

Is it that you don’t have the equipment, skill or permission to cut axles. The former two are easily fixable but if it is a matter of permission then that would be harder to overcome.

Equipment and skill is the issue. That and the fact that my house is small so it is full of flammable stuff.
Do u know any good places that I can go to to cut things?

Other than a friend who has some tools, I’m not sure where you could go, but you can pick up a clamp and a hack saw and in a pinch that can get you a long way.

Got any brand recommendations? The ones I have dont work so well

I personally use a dewalt hack saw although there are a lot of brands that you can find at a home depot that will suit your needs.

Will it cut steel axles as well?
Edit: how long does it take?

Should be less than a minute, pretty much any hacksaw will get through a steel axle if you cut long enough.

Like @Ryan_26982E said it will cut just about anything if you take your time and are strong enough. I would recommend that you avoid cutting an axel far away from an anchor point, like a clamp, to avoid bending and ruining the axel.

We use a dremel and it’s fast and easy.

Looks nice. I guess the base is thin and the wheels are close together to be able to more easily place stacks in the goal zones, but the wheels look really close together. I would recommend placing the back wheels all the way back.

Adding to what people have said - support from both sides is recommended. But I understand this may not be possible right now - but don’t worry. Teams have been successful without support on the outside so its not impossible.


The best way for this to work is for the shaft to pass through 2 bearings on the inside of the robot - should improve the drive base’s stability.
1 Like
next page →