Could you please make it so that students can enlarge or full screen the video tutorials in the VEXcode app? They are very small and we are unable to adjust the size.

@RoboAmy
Try using the zooming in feature on your device or screen record the tutorials and use a video editing software like iMovie to zoom in to the tutorials.

There’s a small fullscreen control on the Mac version on the right hand side of the playback controls, I would need to see if that’s available on other platforms. 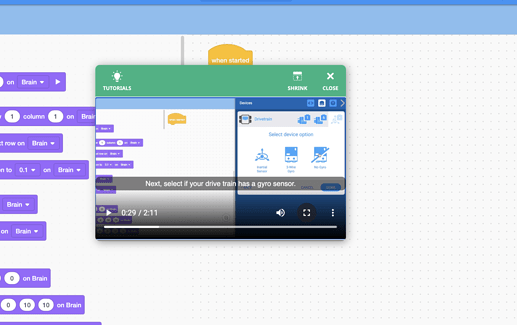 Also I have VEXcode IQ.

I can click the options menu, but the fullscreen button doesn’t do anything. Does yours?

It works on a Mac, I’ll ask the VEXcode team after they recover from the worlds marathon.

Yes, it works on a Mac but not on Chromebooks.

The video play and by extension the fullscreen feature on Chromebooks is provided by the operating system. So the fact that it is not working, is very surprising. The fullscreen feature does work in the browser versions of the VEXcode applications on Chromebooks. Since Google/Chrome is planning on dropping support for “native” apps in June, I would not expect that this will be fixed in the native apps

When did this get released? This may just be revolutionary in my classroom

Since Google/Chrome is planning on dropping support for “native” apps in June,

Oh dear! What does this mean?? Are VEXcode IQ and V5 going to be unavailable come June? Will codeiq.vex.com and codev5.vex.com support Python/C++ by then? (I hate blocks!)

It just means that on Chromebooks, the Chrome Web Store will cease to be and so Chrombook users will use codeiq.vex.com and codev5.vex.com instead.

We’re just getting a black screen with a spinning black circle, video never loads to view.