Is it legal to hit the back of a robots tray while stacking in the unprotected zone.

Yes it is legal, since technically if your intakes are still surrounding the bottom cube, then every cube counts as being in possession and therefor the stack isn’t placed. So at that point it’s just regular defense. But if you pull away from the stack, and then they hit into your tray and knock it over, then it is a dq. So if ur still touching the cubes, they can pull off this move.

While that is a valid interpretation, I disagree because the defending robot will be indirectly contacting the goal zone/barrier of the non protected zone. This would violate SG3 case D. Also, if you repeatedly knock cubes out of an opponents tray, and cause them to leave the field, that will violate SG6, although this rule is more up to a head referee’s discretion. However, constantly employing this strategy should be a DQ since it would be repeated and intentional at that point.

I think it’s clear. What rule are you referencing?

Yup. Full rule below. There’s a lot of paraphrasing that happens, always good to quote the entire rule, myself included. 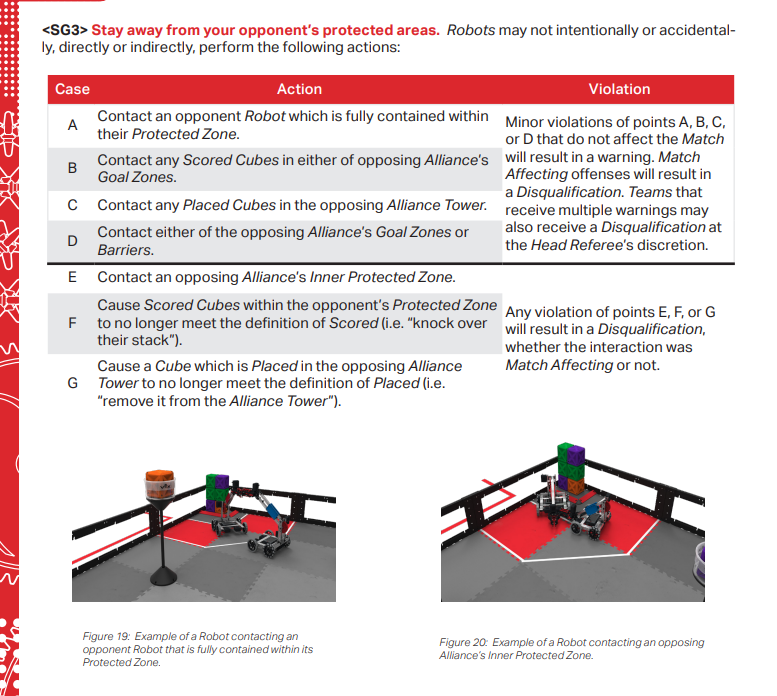 And you can’t force an opponent into a penalty…

I think that the best bet for the offensive bot would be to wait for the pinning call on the defensive bot and then quickly finish scoring while the other bot has to back off… I know this is not going to be easy but it’s at least going to give you a second or two to get it in there.

ok…I don’t understand how SG3 doesn’t protect from hitting bots in the non protected zone. If I am touching my barrier while trying to score, and you hit me, you are 100% indirectly contacting my barrier. According to SG3, indirectly contacting an opponent’s barrier is illegal. Forget about knocking cubes out of the field, this is as indirect as it can be without being direct…

you are 100% indirectly contacting my barrier.

But you are not being forced into a penalty because it is not illegal for you to touch your barrier. That’s where I don’t know if the argument is going to hold.

I think the precedent is this is ok. It’s been too much already to be ruled against. If this rule was upheld by the gdc, then I could drive my bot into my goal zone and unload my cubes in a wall across the field. You cant touch the wall of cubes because they are an extension of my bot and my bot is in the goal zone thus indirect contact.

Well there is a ruling that explicitly asks this question, and once the GDC answers, we will have a clear answer. Unfortunately, they still haven’t answered after over a month, so I’m still waiting to hear.

In this Q&A, they specifically stated it was considered indirect contact if a blue pushes a red into the red unprotected area and causes the red to knock down the stack (thus violating, indirectly, SG3 case F “cause scored cubes within the opponent’s protected zone to no longer meet the definition of scored” according to that Q&A).
(Although I think it would actually violate SG3 case B “contact any scored cubes in either of opposing Alliance’s goal zones” - according to the other Q&A that says case F is only for the protected zone.)

In thinking about this further, I don’t see how this would be any different for goal zone barriers. That is, I would say it should be considered indirect contact if a blue pushes a red into the red unprotected area and causes the red to hit the goal zone barriers (thus violating, indirectly, SG3 case D “contact either of the opposing Alliance’s goal zones or barriers”).

This would be a good question to ask on the official Q&A, honestly, because IMO that would really mean that very little (if any??) defense should be played on robots scoring in the uprotected zone since potentially all 3 of the following rules could be violated:

[ETA - @Xenon27 is correct that there is a pending Q&A that asks about contacting the barrier indirectly, although it appears to be focused on the protected zone - when that gets answered it should hopefully provide a better understanding of how that impacts the unprotected zone.]

Unfortunately, they still haven’t answered after over a month

If I had a better idea on the internals of the GDC I would be a little more sympathetic to their situation… But I don’t, so I don’t…

There is a real mess on the IQ side of things right now and the clarifying questions have been hanging out there for a month as well… And everyone makes up their own way in the meantime!

the precedent for dealing with defense on the unprotected zone seems to be:

and until the gdc decides to answer the q&a the most reasonable thing to do imo would be to continue following these precedents.

Just clarifying on @Xenon27 ‘s interpretation: notice the word “stacks” meaning the stack must be counted as placed. So you can push another robot into their own “stack” as long as it is not “placed” yet. But if it is placed, then it’s a dq for indirectly knocking over an opponents stack.

Just clarifying on @Xenon27 ‘s interpretation: notice the word “stacks” meaning the stack must be counted as placed. So you can push another robot into their own “stack” as long as it is not “placed” yet. But if it is placed, then it’s a dq for indirectly knocking over an opponents stack.

To clarify more, you should call them “scored,” “placed” cubes are in towers.