[FONT=Verdana]There have been a lot of questions about what is coming down the pipeline and when it will be released. I always try to do my best to give you guys as accurate a picture as possible, as soon as possible. I am proud that we have had a steady stream of products releasing since the launch of the VEX Robotics Design System in the summer of 2005.

We appreciate ALL the information, and this will let ALL OF US start saving those Extra Pennies up to invest in VexLabs parts.

I’ve always appreciated whatever information your could get for us. Please pass along my thanks to the rest of the company (especially to those who don’t read the forums) for being so open with us about your product developments.

Thanks for the update. It’s great to have new stuff to play around with.

Could you give us a general idea of when the official field kits are coming out?

I know you have gotten millions of questions about product releases, but just wondering what about the compass, how come it didn’t make the list?

The one mentioned in this video: http://www.youtube.com/watch?v=X0wFOxgHnks

I just wanted to say “Thanks” for the product updates too!

I know that you can’t always tell us what’s going on and like you said sometimes things take longer to develope than expected. I know that we have all been bugging you about the new products and I know we all appreciate the update.

It was especially nice to see the heavy duty chain and sprocket kit on your list. I haven’t had any problems with the original kit, but I know other people have. Thanks for the hint about it in an earlier post. It will be a great addition.

As previously stated, now we can start saving up our money.

I know you have gotten millions of questions about product releases, but just wondering what about the compass, how come it didn’t make the list?

The one mentioned in this video: http://www.youtube.com/watch?v=X0wFOxgHnks
Thanks,

I was also wondering about the Vex Compass too.

this sounds great. high strength chain and gears… i will defiantly want to buy some of these.

What about the Vex RC Mini and it’s accessary kits? They weren’t on the upcoming products list and neither was the Vex Pro (Qwerk) Microntroller.

Is there any information that you could give us on them?

IIRC it is the Vex RCR VexMini Crab Walker.

Oh… I know what you’re talking about now.

Check out the latest issue of Robot magazine. A picture of the leg kit is inside.

Do you mind posting a scan of the image so that those of us without access to robotmag will be able to see?

Here it is, pretty cool, huh! 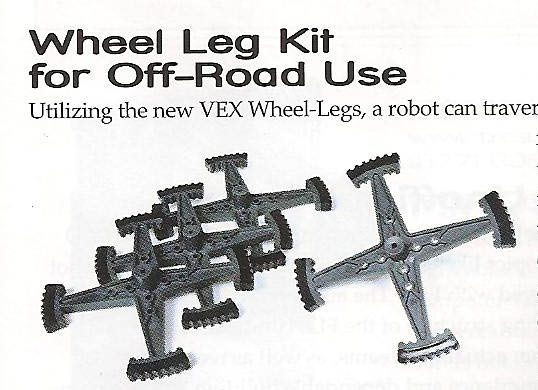 There was a picture of the VEX Wheel Leg Kit in the November/December issue of Robot Magazine which just came out.

Each Wheel Leg has a large hub with 4 spokes coming out of it and each spoke ends in a curved foot pad with some kind of tread on it. If I remember correctly, they are 6 inches in diameter.

Sorry for the duplicate information, I must of missed Technic-R-C’s post

If those teeth match up well enough with the ones on the Vex gears, you could create an interesting movement pattern with them by using them as gears themselves.

If those teeth match up well enough with the ones on the Vex gears, you could create an interesting movement pattern with them by using them as gears themselves.

If the final product matches the picture above, then I think the “teeth” on the feet look way to large to mesh with Vex gear teeth. Still, I suspect folks will come up with all sorts of interesting and unexpected uses.

What is the Vexnet? Thanks for the new parts! (:(Although I don’t have enough money for new parts:()