Hello, at the competition today 1320C had a very odd issue in the finals match. Midway through driver control, their robot stopped functioning and the remote screen started flashing red. The robot didn’t function for the rest of the match. After the match, we checked the error log. It was continuously spamming the following events. (sorry for the bad picture) 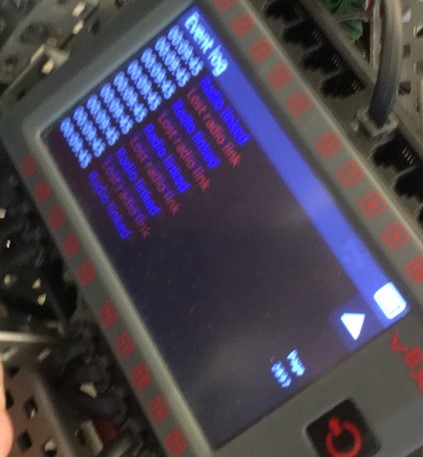 Over the space of about 5-10 minutes, it generated about 3,100 pages of those two events. After power cycling, the issue disappeared. Does anyone have any idea what could cause this? I would greatly appreciate some help as this may have determined the outcome of the finals.

What version of vexos did that happen on ?

Also, I forgot to mention, they are using rmbuild.

ok, well, I’ll take a look and see what could trigger continuous log messages like that. Hopefully it was a one off. Do you remember if the radio connected to the brain was green or red ? or flashing ?

I’m not 100% sure. The light was off when I saw it, but that may or may not have been after power cycling the remote. However, it was still outputting the messages at that time. The red light for the port never turned off.

Was the remote also updated to 1.0.5 after the Brain was?

@John TYler It was

Was the remote also updated to 1.0.5 after the Brain was?

in 1.0.5 we prompted controller update even if controller was used wireless, so it’s hard to skip.

One on of our local middle teams had the problem sporadically with lost connections prior to 1.0.5, we thought that would resolve the issue. They have now been at 1.0.5 since released, but still having periodic issues.

At a competition yesterday, the first 3 matches seem to go ok, but then the radio connection problem began again and was severe. The event log confirmed the details. During the 2nd half of competition, they swapped out the radio, swapped out the cables, moved the radio, and changed the port with still no luck.

I noticed their brain was very sluggish when moving back/forth the screen. They had time between prelims and elimination matches - swapped out the brain with a spare that recently arrived, and the problem was resolved.

@jpearman - have you seen any radio issues caused by brain hardware faults and/or sluggish behavior in V5 brains? I’m going to run through some tests before getting the details to VEX support, so any advice on specific things to test would be appreciated

and radio definitely changed from green to red during the problem.

@PlacerRobotics Were you getting the same events in the picture dozens of times a second?

@jpearman - have you seen any radio issues caused by brain hardware faults and/or sluggish behavior in V5 brains?

not that I remember.

I noticed their brain was very sluggish when moving back/forth the screen.

did this happen even after brain power cycle ? do you mean slow to start a program ? or just going into devices screen or something ?

@PlacerRobotics Were you getting the same events in the picture dozens of times a second?

No - the event log had discrete occurrences that corresponded to what happened on the field (started auton, disconnected; reconnected in driver mode, then disconnected several times).

Yes, continued to happen even after power cycling multiple times in the event (changing batteries, etc).

I believe all the actions from the touchscreen were very slow, but I only saw it directly when reviewing the devices/event log. I should have the brain here tomorrow - plan on testing with their program and different motors, radio at first; then a test program, and finally a reset of brain and reinstall of the firmware