We have 25 new V5 robots for our school and within just a few charges 2 of them are not working. They are fully charged (at least they show to be with 4 green lights) but get a fast blinking red light as soon as we plug them into the brain and the brain will not power on. The only way to make the red blinking lights go away it to put it on the charger but it goes right back to red the second we plug it back into the brain. The firmware is up to date but the cells show approximately 2.8 volts per cell where the ones that work show approximately 3.2 volts per cell. Any thoughts or help?

How fast is it blinking, and at what position?

It doesn’t but thank you for the reply.

Just as soon as it’s plugged into the brain it starts blinking fast red nonstop until we plug it in and then it shows four green lights. It does this every time we try. The reset button does nothing.

which led is flashing red ? Have you tested using battery medic ? If so, can you post a screen shot (I assume you have if you already know the cell voltages)

We have started having this problem too. It seems we have a cortex that when any battery is plugged into it the start flashing red on the first LED.
We couldn’t get the cortex on long enough to do an update, till I plugged the battery into charge at the same time as running the cortex. I’ll try the Battery medic tomorrow.
Wondering if it is because we have competed much in the last two years, so batteries have been hardly used.

I have the same problem. Doesn’t match any of the patterns in the KB article. Here’s a little video: IMG_1645.MOV - Google Drive

Fast flashing red is symptom of battery under volt fault. The fact you can still press the button and show capacity is irrelevant, run battery medic to find more details, probably one cell is very low. 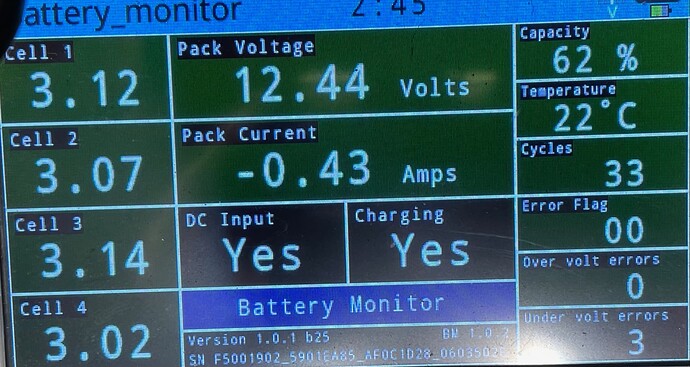 Off the charger, it took a few minutes for it to die. The cells degraded about the same, cell 4 the fastest, but cell 2 also went red before it shut down completely. 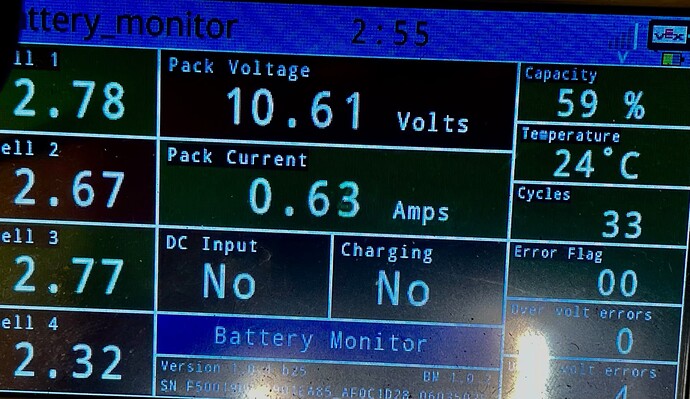 Given the undervolt errors, is the battery a lost cause?

No, let it discharge on the brain and see what cell voltage is just before it turns off (ignore capacity for now).

As a comparison, here’s one of my (somewhat abused) test batteries, many under volt errors (and not something I pay much attention to as it’s not used for competition). I’ll run this one down and see if I can get an example of low cell voltage. 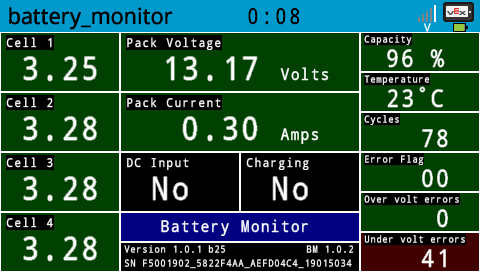 Guess I was typing when you posted the second screen shot. yea, cell 4 is low

Give it a full charge and then let it discharge on the brain with medic running, it should last quite a while with that current draw. I think under volt fault threshold is 2.35V, but medic will show red before that at 2.7V IIRC.

so I ran that test battery down. Here is a screen grab just before it shutdown with under volt error. 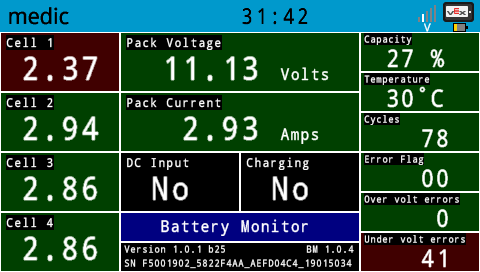 pack voltage was still above threshold for running the V5 so the brain did not send a normal shutdown command, once cell1 dropped below 2.35V the pack protected itself.

I’ll charge that battery back up and see where charge stops, just suspect that one cell does not have charge capacity of the others at this point.

@jpearman thanks for your help! The battery works pretty well now.