There was some discussion in a topic at the end of last year about the internal drive program that the V5 uses.

Newbie here, with what might be a couple of simple questions, but not simple to us… TO START: I have a V5 brain that can’t seem to make up it’s mind whether or not the smart port is dead or not. We’re a young, inexperienced middle school crew that has build the current “Hero” robot published by VEX, which is supposed to run on the pre-installed clawbot code. As built, there is an arm-lift motor that connects to port #3 on the brain. When we finished the build, we tested everything, with the…

The code we use inside the V5 brain for the drive program is not available as it’s written using a lower level API that we don’t really support publicly and also uses some private methods to allow the configuration data to be passed to it. However, it’s not a very complicated piece of code so I have written a simplified VEXcode version that could be used when needing to modify it as requested in that previous topic.

The code is in a github repo, there are multiple versions of the project but (other than the blocks version) they are all essentially the same. A partial simulation of VEX V5 internal drive. Contribute to jpearman/v5-drivecode development by creating an account on GitHub.

Only a single controller is implemented (built in drive supports a partner controller).

The blocks version only controls six motors, the others can access all 10 motors in the same way as the built in drive code.

The code is expected to be used on a V5 clawbot, but could easily be adapted for other use.

The code displays some motor related variables on the V5 brain’s screen, just delete that functionality if you don’t need/want it, the display code runs in a separate thread. 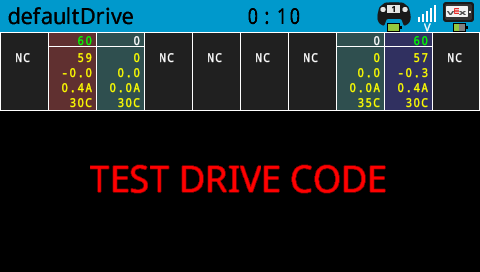