I was wondering if the V5 Motors could detect a force on them. For example, if I used a claw would the motor know when something was being held in it by it not being able to close the whole way?

Can it be done by coding or is it just not possible. Let me know what you all think.

I know that the brain can detect voltage differences from the motor and if its holding something then it will have more power usage but I am not sure how to utilize that. You can view it by going to devices, then tapping on the motor and it will veiw some info on the motor. Although I’m not sure if trying to program this will work as well as using something like a bump sensor or an ultrasonic sensor.

Unfortunately, I’m rather limited on material and don’t have any type of sensors. and with a claw, it’s not the easiest to put a bumper sensor on that.

I was wondering if the V5 Motors could detect a force on them.

monitor the torque or current of the motor.

So for like a claw, i would just monitor if there is a spick in voltage from the motor wanting to move but not being able too? 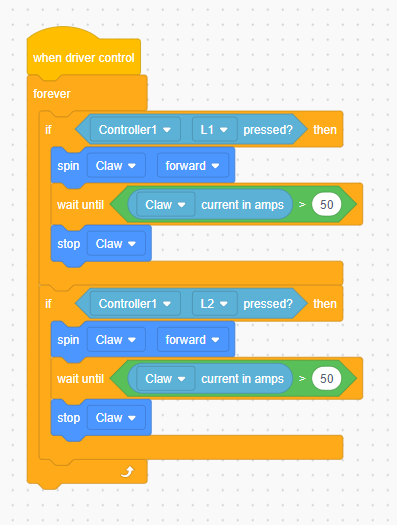 Like this? With the “50” being adjested by what ever numbers it needs to be.

Yes that is essentially how it should work. Now you need to get accurate current levels so you can get it to work. Also I would suggest making the current level set that it will detect at a slightly lower current because I doubt that it will be consistent. Just high enough that it doesnt detect without that. The biggest concern is consistency so if you get that then you should be good. (Oh and im not our coder so I cant say the code is exactly right but it looks right to me

cool, all good tho, I’m not the coder either. My coder is just super lazy

That code will work for the question asked… but it will make the motor/claw unstoppable… when the button is pressed the claw will move to either full open or full closed… and you can’t stop it in the middle.

For reference… 2.5 amps is maximum before motor’s internal protection kicks in. 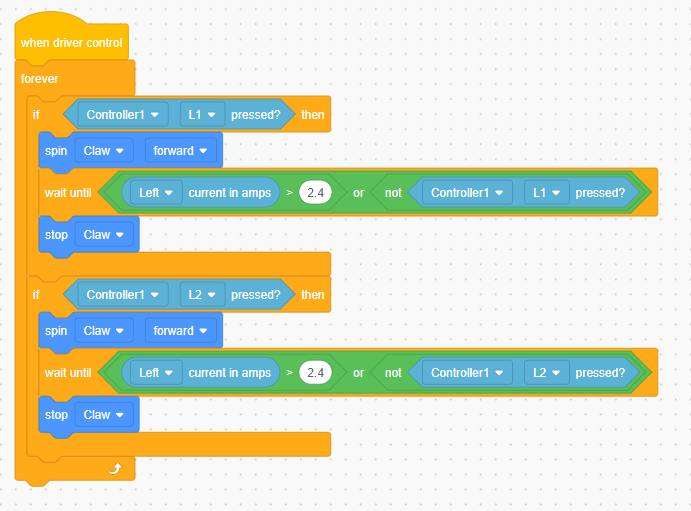 Yeah… assuming that ‘claw’ and ‘left’ are the same thing.