All items below were attempted with the Clawbot - built precisely following directions from VEX.

Is there a reason for the inconsistencies in turn rotation using the drive commands when the gyro is included in the drivetrain config? I know it is only off a couple of degrees each time, but that makes a big difference when the robot is travelling a longer distance. 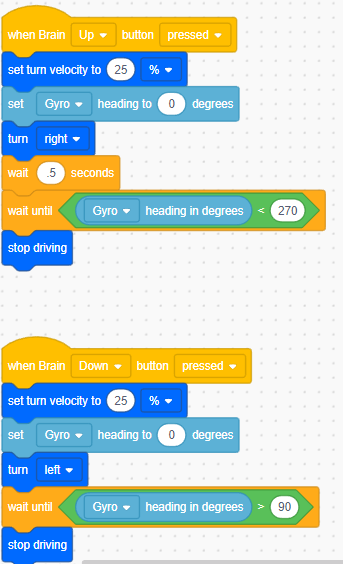 Amy, did you ever find out the issue? We are having the same issues. Wondering why they gave the ability to add it to drivetrain. Not much information out there on this. Thanks

Gyro based turns will always have some variance to them due to momentum of the robots and other external factors (surface friction, wheel friction, etc.). Not to mention the initial alignment of the robot as the “zero point”.

For gyro-less turns, the wheelbase and track width parameters (as of 1.08) are used to estimate the number of motor encoder degrees needed to rotate the robot. These values will be particular per robot design but will also suffer from additional issues such as wheel slippage that may affect accuracy.