Hi all!
I am new to programming and I am wondering if in VCS you can make a motor turn on and off at the press of a button. what I mean is if you press L1, one time and release it, could you make it stay on until you hit the button again? any and all help will be greatly appreciated!

I’m not exactly sure how to do it with a single button, but last year my team did that with our flywheel with two buttons as shown. Btw, our teams programmer had zero experience so I’m unsure how good it is. Hopefully this helps. 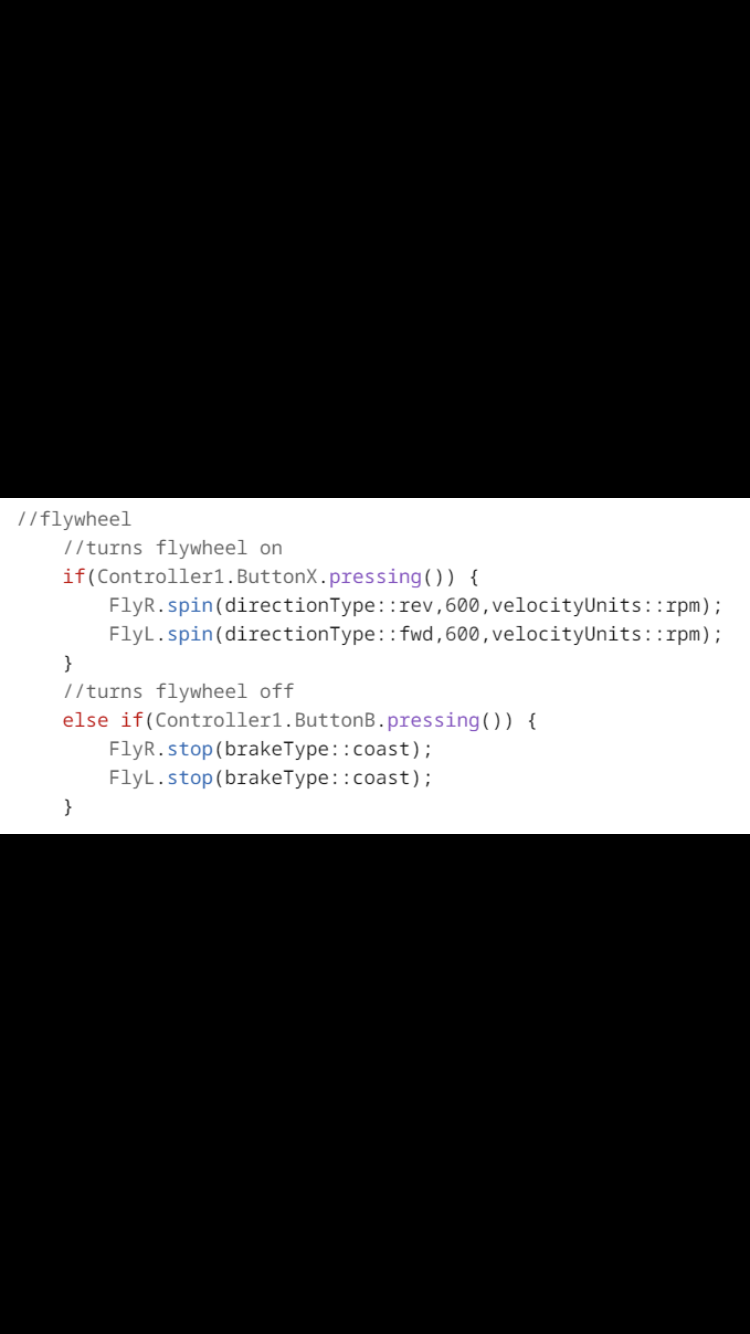 There are also numerous topics discussing how to do this.

okay, that makes sense thank you all sooo much!

I don’t have time to write the code right now, but I would probably do something like:

All in a while loop

Tara,
Would this be betrer than what the other people told me? It seems difderent.

You’d want to use something like this to accomplish the wait the code below would have the code wait until the button is unpressed. Use “false” instead of “true” for waiting until unpressed.

Okay, that makes sense, thank you!

The code below should do what you are trying to do. Basically, it sets a variable to 0 and 1, and then sets the motor to spin or not based on whether a is 0 or 1. Sorry about the messy indenting. Good luck!

Awesome! Thank you, I was just about to ask how you would do it with variables.

You can do either what I said or what @RandomKidOnAVexTeam said, except if you use his you want to switch

What does that do? The sleep function was to get rid of bouncing. It could be reduced to 700 or even 500, but I don’t understand the point of the while statement.

It pauses the code while the button is still being pressed, such that it won’t bounce, but also starts the program back up again immediately once you release the button. It doesn’t matter if you press the button for a nanosecond or a year, it will still work correctly. You don’t have to guess how long a button press lasts.

Wouldn’t you want a wait one msec in the while statement, or is that not necessary?

Well yes, I forgot to include that. You don’t want to waste processing power.

The released/pressed take in a function to be called. Also the function will not stop any of the code in you main loop from running.
Also here is the code shortened:

You can do either what I said or what @RandomKidOnAVexTeam said, except if you use his you want to switch

Please do not do any of these. They stop all other code in your loop from running and sleeping for 2 seconds will be the wrong amount of time (also not that important but a does not have to be an int it can be a bool which is just true or false).

Here is a solution similar to yours…

Like this it is changed when the button released:

The change is that the not sign is now in the first if statement instead.

Also if you want the motor run command to be run only once you can do this:

Yes. A callback would work as well, but it’s a little harder to implement. I gave the easy solution such that it would be easy for OP to understand and implement.