VEX batteries are hard to insert/remove

Hi, I’m a new VEX IQ user in my classroom and have a classroom set of these robots. I noticed that the batteries are super difficult to insert and remove on a few of the robots. I’m not sure if it’s the battery that is causing the issue or if it is the individual robot… more testing is needed. I understand that you don’t want the battery to come loose super easily, but one robot and battery combo, I had to get a hammer to tap the battery out of the robot brain. Any suggestions on how to improve this?

New to me, we have dozens of IQ brains. Never had a problem except when someone puts the battery in backwards. They are sometimes a bit firm, in that you have to depress the locking clip pretty hard and push it out from the other side.

Welcome!
I take it the brain is still connected to the robot in these cases? Is it possible the structure itself is obstructing the battery or rubbing on it? Or is the battery not going in square? I’d recommend pulling the brain off and trying the fit first, so you know if it’s a battery/brain compatibility issue or something else. I suspect the students didn’t have the battery aligned properly when they inserted it.

No, the brain was just loose. This was me doing this… not my students. I stuck a battery in to power the brain to make sure that it and the remote were paired before I turned the kits over to the students to start building. I had easy access to be able to put the battery in and remove since the rest of the robot body wasn’t even built yet. I had the clip pressed down, but the battery still wouldn’t budge just using my hands. I’m fairly sure the battery went in square since there was nothing there to obstruct it, but I guess it’s always possible that it didn’t.

@mcarr I got four sets of robots that had this problem. If you look at the sides of the battery there is a tenon that holds the battery in place. This is actually the seam of the top/bottom of the battery.

On mine the seam was noticeable. Because of the tight tolerances that makes VEX work, the battery won’t slide into the brain.

My fix was to take hook knife and slide it down the tenon to remove some of the plastic. It was a scrape and test process, but it didn’t take long to get them to fit. 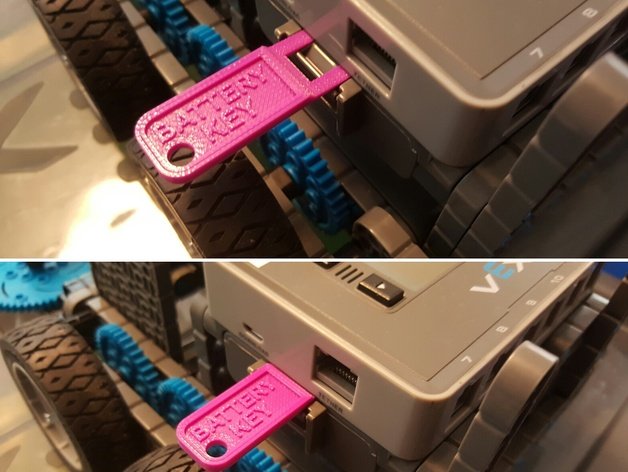 In working with my students with the VEX IQ Robotics kits, I identified several batteries that would not properly eject from the robot brain. After identifying the problem, I designed and 3D printed a tool that ejects stuck batteries with almost no...

Also, just like the Smart Cables, push in before you press the tab down while removing, otherwise you can bend the tab (batteries) or wear/break the catch (cables).

Once bent, battery key is the only way. Look for white stress marks on battery tab. I put students through pointed, exact training on this, they still mess up…

We’ve had similar issues since the beginning. We have the kids use a large bladed standard screwdriver in a manner similar to the “key” above. They insert the screwdriver over the tab, rotate slightly, and push from the back of the brain. Works every time, The tabs on the batteries deform very easily.

Thanks for the suggestions, everyone. I didn’t have a knife, but I did have some sand paper so used that to remove a little bit from the tabs on the sides of the batteries as I needed to. I just had to make sure to clean them off well after. @rhowbot thanks for the tip about the battery key. I’ll keep that in mind, if I continue to have problems.

Our kids find it easier to push it through from the other side rather than pulling it out.

I just received a new Super Kit and also experienced the tight battery problem as mentioned above. I needed a screwdriver to remove it. It seems as though the release lever on the battery is blocked and cannot move the locking tang far enough to clear the detent in the robot brain. The evidence is the white stress deformation line formed when fully pressing the release lever.
VEX should investigate this as I really don’t want students poking screwdrivers into the space between the battery and brain.

I used an Exacto knife also known as box cutters to scrape a bit of plastic from the battery retaining clip. Take a little bit off at a time and test. They work very well now. I have 8 robot and the batteries were brutally difficult to get out until I scraped the retaining clip down a bit.

The tabs can have their ‘pivot point’ plastic weakened if flexed too much. I shaved the battery clip down a bit to make it easier to remove.

YES! I have the white stress on the lever pivot point as well. I shaved the clip down.

we have 20 robots and all of our battery’s are fine to insert and remove? and shaving down the battery’s would not be legal for competition

Thanks for sharing, but the fact that your batteries are easy to install and remove does not negate the fact that mine are not. Not sure what you are implying with your testimonial. I do not have my kids compete so ridiculous rules are not particularly relevant to me either. I am an engineer and make things work. There are no rules for engineers other than the usual ethical ones. I’m happy with that. But since you mention it, I wonder how well a kid would do in a competition if he/she cannot remove a battery without snapping its hinge off? Obviously I am not the only one with a poorly constructed battery, but I guess that doesn’t matter because your batteries work just fine? Logic?

we have 20 robots and all of our battery’s are fine to insert and remove? and shaving down the battery’s would not be legal for competition

Nice for you, @FlyingRobot2917X I’ve had a stack and I trimmed them down. They stick, I fix them, they are unstuck and roboteers move forward.

Not sure how they won’t be legal for the event. If we’ve gotten to the point that fixing a manufacturing defect by 30 seconds of work with a knife cause a DQ then I’ll be really sad.

Hey @DRow if this is the policy let us know, I’ll, and the other 100 teams will start RMA setups.

what i am trying to say that vex shouldn’t be making product faults like that and should replace the product for you, the fact that we bought 20 batteries and they all worked means that it still should be illegal to modify parts, I doubt that any EP or ref would DQ you for that rather tell you to get a replacement under warranty, which solves all of the problems

Wait, stop, don’t buy a special knife (and now I’m thinking is this a troll/spam)

Use a craft, box or blade knife. You only need a few shavings off of it