My students use VEX Blocks on Chromebooks to code our VEX IQ robots. When my students save their codes, they can only access them until we close out of VEX Blocks. When we open VEX Blocks again, the files are gone. We have tried searching the devices as well. This results in a lot of wasted time re-coding what we already did before we can add to it the next day. I don’t know if it is an issue with my Chromebooks, my schools security settings, or an issue with VEX Blocks.

VEXcode IQ Blocks saves files to the Chromebook as any other application would - you should check with your IT Administrator if they can identify the issue for the missing files. Also ensure that you’re saving the files to a location on the Chromebook that you have proper permissions to use.

Did you ever figure this out? We are having the same problem but on iPads and looking for a solution.

A few of us are having that problem. Check this thread for some suggestions.

Several of my students are having problems with their VexCode program being deleted on their iPads; even with they use “Save As” and store it on iCloud. Other students have no issues at all. A Any ideas or suggestions? Could this be related to our school WiFi?

After I posted last night I really dug into the situation further and I think I realized what our problem was. Our kids were saving their coding programming and then shutting out of the app. When they went to go reload their program, they were hitting the rectangle in the middle (that says Vexcode blocks). It looks like it would be an open button and from what some of my kids said, on other programming apps it is an open button. However, in Vex IQ blocks it is essentially a SAVE AS button. So the kids were opening the app (so it just has the when starting block) and hitting that rectangle. It would open to their files and they would select their coding file. However, what happened next is they were essentially writing over the code in the saved file (their coding they saved) with the coding that was on the screen when the app opened (which is only the when started block). So it appears that the program did not save their file when it “opens”, but what is really happening is the are overwriting their saved file with a blank coding. To open a file, they need to go to the file button on the left hand side and open it from there. I think the kids (and some of us adults) were assuming the rectangle in the center (that says vexcode blocks)was an open file link when it actually is essentially a save as link. We trialed this several times last night and it seemed to solve our issue, so I am curious if it is the same for others who have had similar issues. Let me know if I need to explain what I am saying better 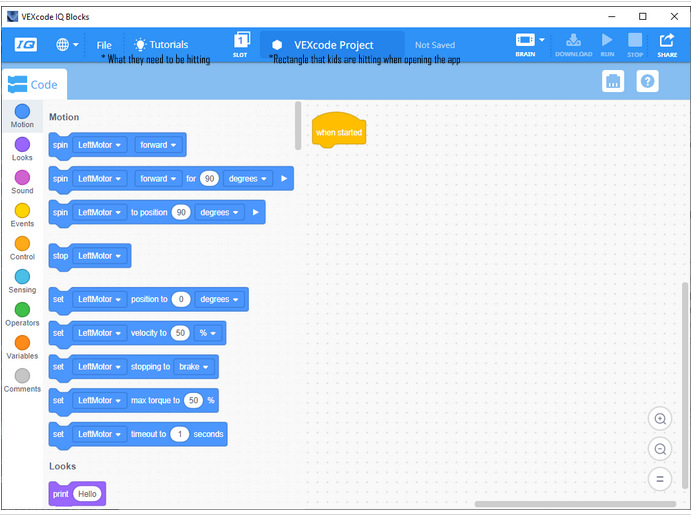 I definitely have students who have saved over their work by accident. That save feature is really awkward. But it’s been happening too frequently and happening to students who know what they’re doing that it couldn’t be just that.

The behavior is keyed on the idea that if you’re going to rename an unsaved project, it prompts you to save first (since project name = file name). Subsequent selections of the project name will prompt a rename dialog.

I’m not sure how the hexagon was mistaken for an “open” icon, however… Are there other applications where that behavior generates an “open” dialog?

I don’t think it so much that it’s mistaken for an open icon as it is they click on it by accident and when presented with a screen with the name of their project on it, they’ll click on it. Especially when there’s no option to exit the save screen.

On iPadOS 13.x, you can “swipe down” on the file dialog to dismiss it without saving.

I know that but I work with 5th graders. Even if they know that, they’re impulsive and it’s not what they’re used to or how any of their other apps work.