Hello! The problem I am having is that when I take a fresh battery off the charger and put it in my robot. Then I drive it for a few minutes then the brain starts blinking red when it says the battery is still full. 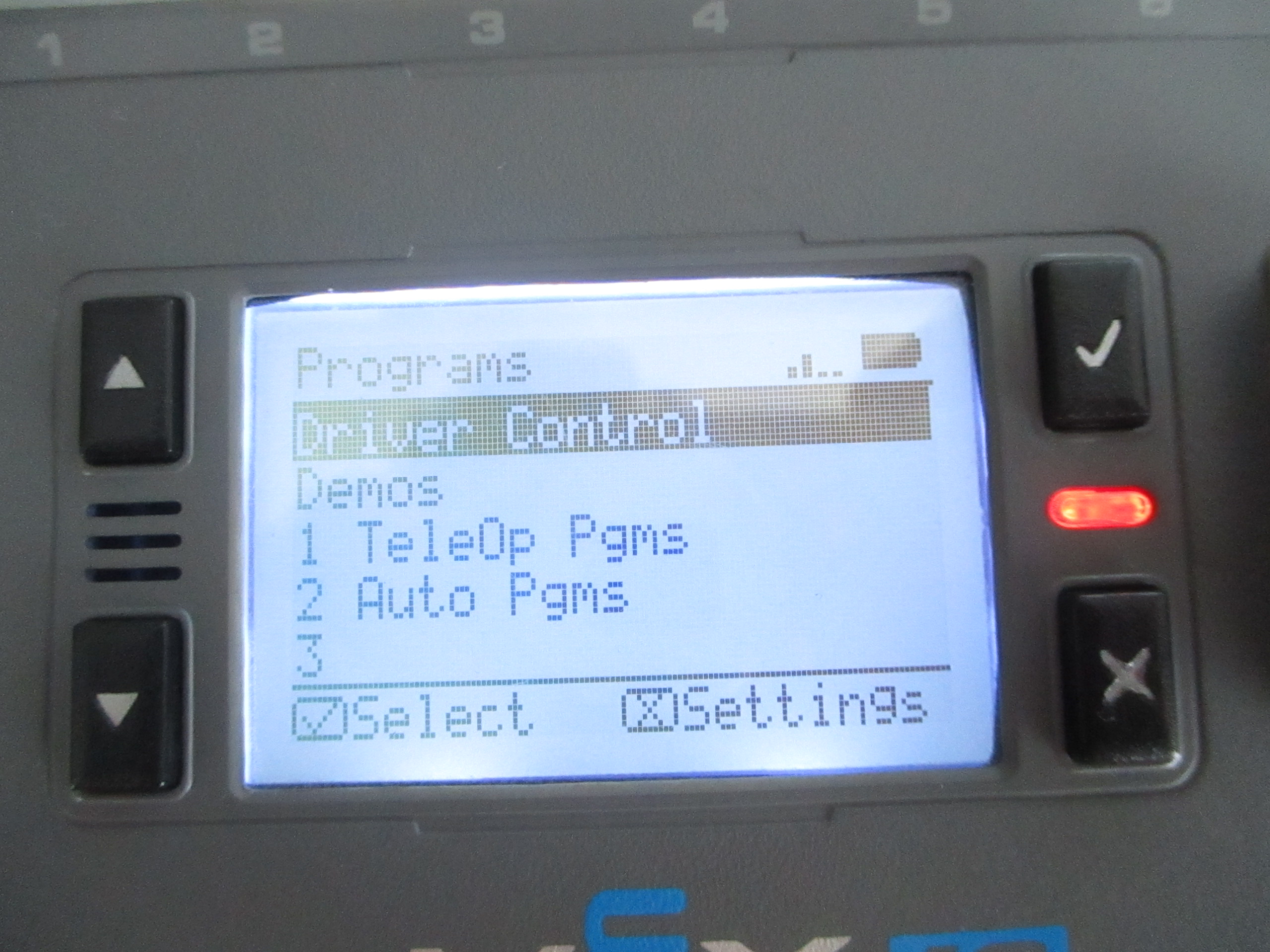 Try another battery, if not that it could be that the battery is overheated

If your motors are under too much stress, it can cause the battery voltage to drop, causing the brain to think that the battery is low and turn the green light red. To solve this, try gearing down your motors (particularly the ones under the highest load, e.g. the drivetrain).

Also, batteries don’t last forever, so if it is an old battery, you might just want to get a new one. But if this was the case I’m pretty sure the battery icon on the brain would not be full, so I’d try what I mentioned above.

What this means is that if at any point the voltage of the battery drops into the red (dead) zone, the LED will remain that color until it is powered off, but the Robot Brain LCD Screen will always show the current voltage level. So if the battery was highly loaded, but then stopped, the LED can switch to red, while the LCD screen afterwards shows it’s still “fully charged”.

Just make sure you check the voltage percentage in the settings menu under system info. Your battery can be at 50% and still show a full charge in the battery image. I will always advise against trusting that image. We have had many students fall for that trap and use uncharged batteries thinking they were full and they couldn’t play a match properly.

it could have to do with when you charge them. if you charge them when they are at a high percentage then the battery thinks it dead. this happened to our team. so what we did is that we ran all the batteries down to 30% or less. then charged them. this helped tremendously. so i would try that.

How old are your batteries?

The older your batteries are, the less charge they can hold. I know they are expensive, so you could try getting a donation from someone. I usually contact my parents’ friends annually for donations towards my FRC team, so maybe you could try something like that.

Also, could you send a picture of your robot so we can see how much load your motors are under (or at last tell us the gear ratios for you drivetrain, arm, etc.)? If they are under a lot of load, as mentioned before, this can cause the brain to think the battery is low, making the light blink red. I don’t follow the lights on the brain to know when the battery is low; I feel it in the robot. For me, I know it is a low battery when I can’t drive while raising the arm with two risers in the claw.

I bought all my batterys last year so I do not think that is the issue. So I have a 40:16 sproket ratio. For the arm it is a two motered arm and it is 60:12. Then for the claw it is a one moter powered arm and has a ratio of 36:12. It was working great for 1 week till I had to fix something on the robot and today I finished all the upgrades and the robot decided to show the red light. Tryed all my batterys and my others brains and it is not working. It was going to be a robot reveal on youtube and now this battery issue I do not have an idea of how to do the reveal. Heres a picture of the side 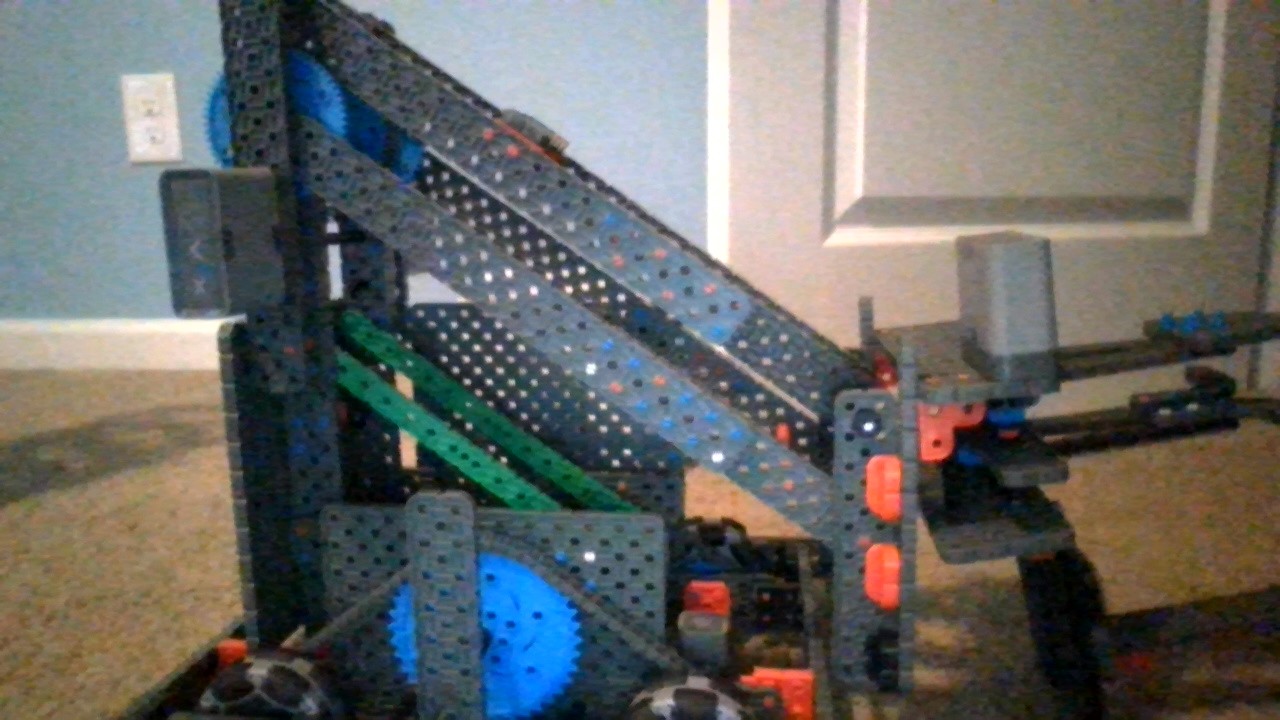 Sorry if it looks little wonky. I removed the bar for the arm.

your drive ration at least in my experience is perfect. your arm ration of 5:1 sounds a little small and might cause strain on the motors which would help explain the battery issues. im running a 7.5:1 which still might be a little light. i’ve senn most ppl run a 9:1.

In my experience, I have never had a 5:2 gear ratio work for a drivetrain. That’s a 60 tooth gear to a 16 tooth gear, more aggressive than a 2:1 gear ratio. Can you send a video of this working because when I tried it, the motors were overloaded by a lot. They are even a bit past their limit with the 2:1 ratio that I am running, which is the most aggressive gear ratio I’d consider doing for a drivetrain.

As for the arm, 1:5 has worked for me considering that I rubber band the arm. Depending on your arm length, whether you are doing an active of passive claw, and the load that will be on the claw, different gear ratios will be appropriate. If you were climbing like in Next Level, an arm geared slower was necessary, but for carrying two risers with two motors, I have found a 1:5 to be adequate.

ok. so my robot is the same desighn as razorbill but it is wider and i do run a 2.5 :1. https://www.youtube.com/watch?v=zXNaCsLHL2Y here is a video of 2 robots runnoing a 2.5:1. here is a picture of the from that same robot in those videos.

this is neither my robot or my cad files. but i use a pretty much identical gear set up on mine.

That’s cool. I’ll have to try that sometime. Thanks for the inspiration.

I would highly suggest using rubber bands on your arm because that lets you make it go faster, ultimately increasing your potential.

I lowered down the sproket ratio and it is still not working. The speed started droping alot and now I am dead.

I am confused as to what your problem is. If I took you literally, it sounds like slowing down your drivetrain made you die, but I’m pretty sure that’s not what you meant.

Is the problem that your robot doesn’t drive at all? Or does it drive for a little bit and then stop? Can you send a video of what the problem is? Or at least thoroughly describe it, thinking about how it would sound from a reader’s point of view and if it would make sense?

It is driving a bit and stoping then the moters have this weird sound. I think that the battery is the issue right now I am gonna order a new battery to see if it will work. It should arrive on december 2nd.

It is driving a bit and stoping then the moters have this weird sound. I think that the battery is the issue right now I am gonna order a new battery to see if it will work. It should arrive on december 2nd.

i’m fairly certain this is a mechanical issue, not related to the battery. if the motors are the ones making the sound, maybe check the motors?