Hello Vex Forum, I am getting vex materials to build a vex robot over the summer and I wanted to build some sort of launcher robot. However, I really wanted to use the intake system and launcher mechanism from 1727b. So, I was wondering if anybody has any specs for any mechanism of a launcher robot. Anything helps. If you can help me with telling me the specs of the base, intake system, launcher, or any other mechanism you are probably saving me hours of designing, building, and coding the robot.

Rather than directly taking the specs from a robot, I suggest you either do a preliminary design of your own or just get a general summary of parts needed. Lean on the side of more parts than you need, better to be safe than sorry.

I have done that 3249v except for the base design because there are so many different base designs and do not know which one to go for. Do you have any suggestions.

It depends on what you’re looking for in a base

Honestly, it doesn’t matter that much. There are infinite ways to solve a problem, and thus far, most designs seem to perform equally well. If you think otherwise, than just choose a design that you find to be best suited for the competition, look at qualities like speed, accuracy, motor usage, etc.
Edit: I am talking about launcher/indexer/flywheel designs

Do you want high torque? speed? Maneuverability? Strafing? There are many factors to consider

In my personal experience, the best general design for a base this year is the X-Drive. I have been playing skills simulation, and the X-Drive is best for scoring. Meccanum drive provides similar maneuverability, but it has been said to be slower.
You can look up specs and tutorials for a general X-Drive design quite easily

If you can help me with telling me the specs of the base, intake system, launcher 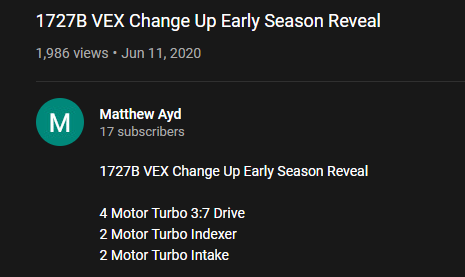 X drives lend themselves better to smaller game objects. In my testing u could fit an x drive in 16 inches for this game but it’s really tight. Definitely could be worth it tho.

Hey Mr. Yuanyang I know the amount of motors I want to use but I dont know how I want to build certain components like the base and launcher

i dont either! can someone tell me how to make them? maybe send a cad???

1669X I think I might go with the classic tank base and had braces in the front for stability and sturdyness. Proabably add some omni wheels and I think it could be a pretty good vex robot base. Because you have a really mobile bot the can still pick up a good load

Tank drives are a basic drive that can’t strafe but has easily manipulatable gear ratios (to change the ratio of an x drive you need to either change the angle that the wheels are facing, or add gear trains to each individual wheel which equals more power loss and less consistency between wheels).

This is the same case with mec drives, except they have the full 4m of power in orthogonal directions, except the mec wheels are heavier and wheels are mounted in a similar fashion to tank drive wheels.

ok cool thank you for telling me?

But the base will take while to design and build. And I really do want to insure some extra time for harder mechnisms like the intakes and launchers. Thats why I thought the tank base might be the better option because it is easy to build and you can still take a big load and have alot space and have a little bit of manueribility