This is my model car I built in a week or so:

Did you adjust speed of left/right propulsion motors to help turning (“electronic” differential)?

No, I did not even think of that. Though that would probably have helped with its turning.

Very cool! We did an F1 car with VEX EDR last year which originally had electronic differential as Philo suggests above. I did away with it in the end in favour of the fun of wheelspin though

This post is quite good timing as we are going to be building a 4WD IQ vehicle with double wishbone style suspension to demo the new differentials and UJs. The part of the concept I am struggling with is the steering arms. Conventionally, these would have a ball joint at both the servo and hub end to allow for the bump and droop of the wishbones. I’m really struggling to come up with a way to do this with IQ though, if anyone has any ideas they would be much appreciated!

Nice car Nathan! I’m going to have my kids look at your steering design when we do our ‘drivetrain challenge’ in the next few weeks.

Hey calvc01 - did you get the 4WD with the double wishbone working? Have any pictures or videos?

Well, for drivetrain, my son tried to build a diff gear out of ordinary parts, but couldn’t figure it out. I was like: “Hey, I have this picture I took in Louisville, they have had a diff gear built in one of the robots.” and shared the photo… It turned out he did almost the same design, but it couldn’t work. What wasn’t visible in the photo was that one piece was modified - the yellow crown gear had to have the original square hole drilled round. That wasn’t a competition robot so no rules broken, but we really wished there actually was a way to drive pieces around an independently driven axle.
That would allow many interesting designs, custom diff gear being only one of them. For example his BankShot robot design uses two independent co-centric axles and he had to build his way around this… 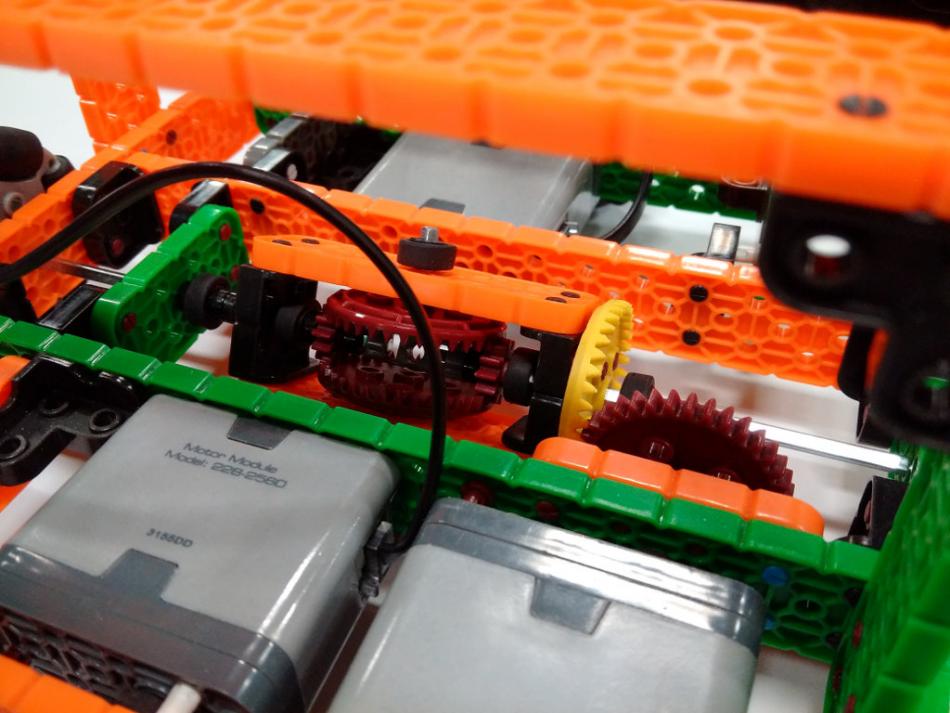 That said, our official Differential & Bevel Gear Pack just went in stock, designed specifically for builds like this. Check it out! http://www.vexrobotics.com/vexiq/products/accessories/228-4418.html