So, our team was checking the Game Manual and we have a question about it. In the Game Manual, rule G19 states that “. Robots which are not contacting the Floor may control a
maximum of two (2) Balls.” When we score our robot hangs on the bar and then flips, then all the balls go in the basket from our ball holder. Is this against the rule?

From the sounds of it, yes, your bot is illegal. Well, the robot itself isn’t technically illegal, if it does this with 2 balls at a time it will pass. 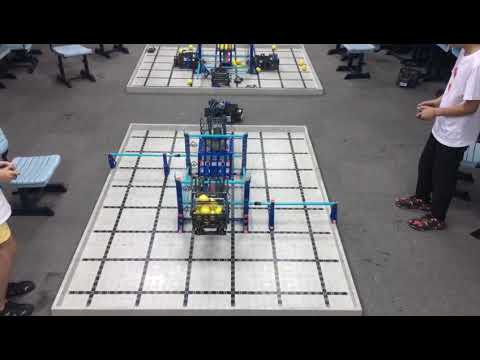 here is a video of the robot we have

There was an update to the rules at the end of august. At that point the new rule was added in that makes it so you can’t leave the floor with more than two balls.

Ok thank you this is very helpfull

Thank you !!!, we will keep this in mind

That would be “contacting the floor”, but any mechanism that reached down to touch the floor while one of these robots was dumping balls into the goal would almost certainly violate the 19-inch height limit.

Hi Holbrook, this week in the Latin American championship in Medellin Colombia happened a similar case, the winning robot of the competition took all the balls at the time to the goal, but the organizers @FunGlobalACT did not see any violation of the rule.
I leave one of the videos where you can see how it works https://youtu.be/maGFSPQh408?t=9403 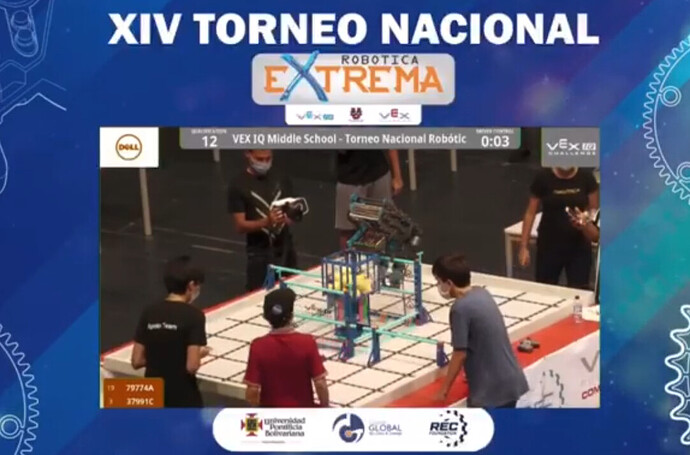 Looks like a clear violation to me – either of G19 if there is no part of the robot contacting the floor:

<G19> Ball control is limited while Hanging. Robots which are not contacting the Floor may control a maximum of two (2) Balls.

In the context of this rule, “control” implies that the Robot is manipulating the Balls, not
simply touching them. For example, if a Ball moves with the Robot either vertically or while turning, then the Robot is “controlling” the Ball. Other synonyms for “control” could be “hold”, “possess”, “support”, “lift”, or “carry”.

There is no restriction on the number of Balls a Robot may control at any other point during the Match. However, a Robot which is controlling more than two (2) Balls must remove any excess Balls from their Robot before leaving contact with the Floor.

Or if there’s an appendage reaching down to touch the floor (it’s a little hard to tell from the video whether or not that’s the case), then the robot is clearly way taller than 19 inches which would violate G5b:

<G5> Expansion is limited during a Match. During the Match, Robots may not expand beyond the following restrictions:
b. Vertically, beyond 19” (482.6mm) high. This is the same height as the top of the teal T-shaped VEX IQ parts in the center of the Field. See Figure 19.

So when this team posts a monster skills score, and the EP doesn’t know the rules, how does Vex handle that in terms of World Skills rankings (which potentially leads to a World qualification spot)?

This design is illegal. The event didn’t qualify for anything directly. They are currently 21st in the world on the skills list and in all fairness I would say that score should be removed.

The event didn’t qualify for anything directly.

According to the event info, this event should qualify teams for the VEX World Championship. 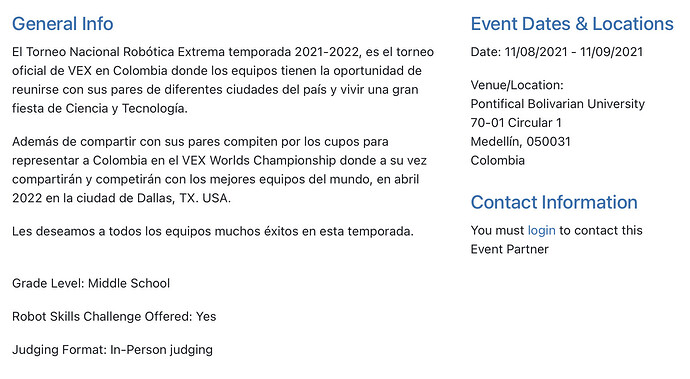 image1537×845 200 KB
(In addition to competing with their peers, they compete for places to represent Colombia in the VEX Worlds Championship where they will in turn share and compete with the best teams in the world, in April 2022 in the city of Dallas, TX. USA translation mine)

But then again, that isn’t reflected in the awards section. It also looks like it was the last event in Colombia (at least for what is posted to robotevents). 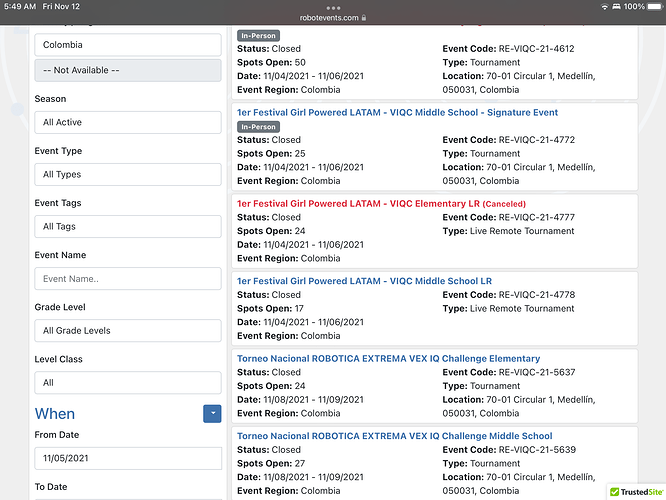 So this definitely is a peculiar case. If it does end up awarding qualification spots to the World Championship, there could be a slight chance that the team with the dumper bot doesn’t know it is illegal (according to the rules as we know them right now), and cannot compete with their amazing strategy. But if it doesn’t, and another event that will be posted in the future does, there will still be a chance that they can be made aware of the rules and create a more legal robot (or at least play the matches by the rules and only dump 2 balls at a time).

Expansion is limited during a Match.

This robot at the moment of hanging drops a small chain to touch the floor.
For this reason it passes the rule " Ball control is limited while Hanging. Robots which are not contacting the Floor may control a maximum of two (2) Balls."

but I believe it already violates the rule " Expansion is limited during a Match." 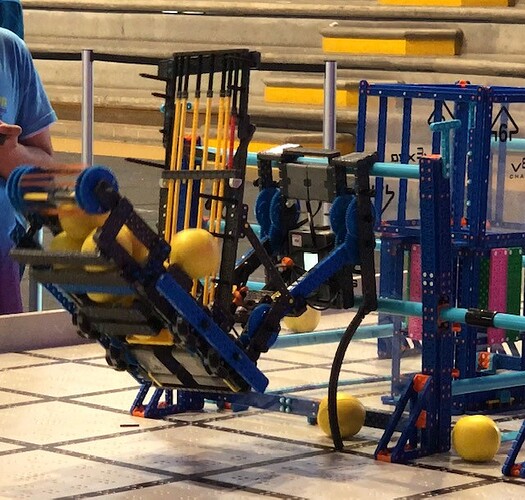 From this image, it’s clearly violating the 19" height rule, and probably the 19" length rule as well.

They will hopefully not try and bring that to WORLDS. They would have a bad day.