I have built the seesaw flywheel for this year’s competition. The discs shoot fine, but the flywheel stops a lot and that makes it hard for many discs to fly out at once. Does anyone have any strategies?

First off, post some pictures, it could better help us help you. In the meantime, try adding a flywheel weight or two to give it more inertia. Without weights, we found that the flywheel loses a lot of speed to the disks coming through, and the weights help prevent this. You could also put standoffs under the flywheel to add a bit of compression so the disks aren’t being pushed against a super rigid platform, which coul cause them to slow down or even stop the flywheel.

What do you mean when you say adding flywheel weights?

Also, here are some pictures 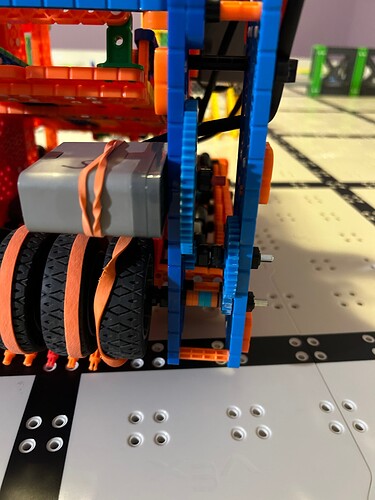 It seems as though the shaft in the first gear/motor is only supported on 1 side. Also do you have opportunities to reduce friction in your gear train? The advise provided earlier is solid as well.

You’re using 3 rubber 200mm wheels on a 15:1 gear ratio. You should have no problems with the flywheel stopping (unless it’s being jammed). The 3 wheels should give your flywheel enough weigh where it shouldn’t stop after shoot out a disc. Our IQ team also uses 3 rubber 200mm wheels on a 25:1 gear ratio with no problems (other than when those pesky jams). One thing about flywheels is that they should spin freely. Otherwise, you may have too much friction, which saps the power going to the flywheel. You should be able to easily spin the flywheel by hand when the robot is off.

I could not tell in the picture. The comment about freely spinning is true. Add the thin metal washers to each side of the brace on the shaft - including the inside the black stopper. We had friction issues until added washers “everywhere a spinning part touches a non-spinning part”. They had to slow motor velocity to 40%to score 4’s. Looked like a pinball game with pucks bouncing every direction. Advice about the weight good too. We had to add layers of rubber bands to get best grab of pucks (does not squeeze the puck too much).